Whatever happened to acts of kindness? 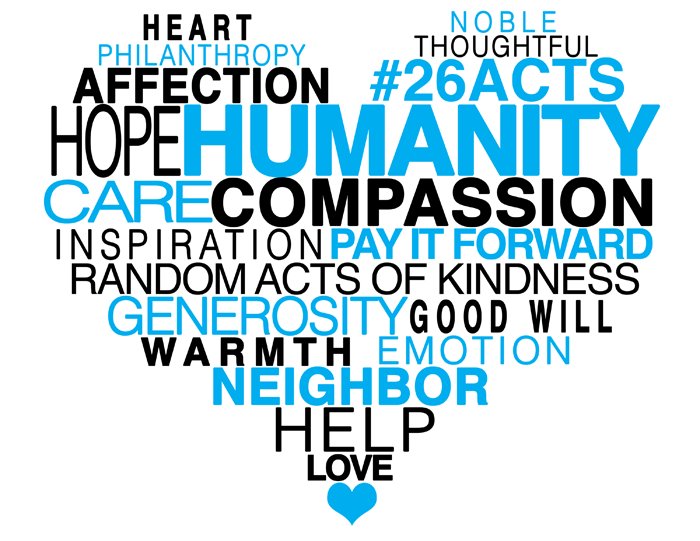 The VOICE of Inspiration

Thursday morning, my father and I had just finished a doctor's appointment he had and were standing in our favorite supermarket ready to check out. We had a shopping cart full of goodies to spoil his grandkids with, along with things he and my mother needed. We had just loaded all the items we were purchasing onto the conveyor belt when my father noticed that the gentleman behind us only had two or three items and would have to wait a bit for us to finish checking out. Feeling bad that we would be holding up his day by making him wait, my dad did what he often does in these situations and suggested to me that we let that guy go first. I agreed and approached the man explaining that we would allow him to go ahead of us rather than wait.

His expression at first was one of confusion. I thought that maybe he didn’t hear me as I tend to talk very softly and fast at times, so I repeated what I had said, slower and more clearly. He still looked befuddled and told me not to worry about it. After a few seconds of thinking about it, he changed his mind, picked up his things and moved towards the front of us to check out. Then I saw the cashier starting to ring up our items and explained to her that we wanted to let the man with less items go first. Her reaction was a slight roll of the eyes and a heavy sigh. Now, I don’t believe she was trying to be rude and she seemed like a nice lady, I instead think that us wanting the gentleman behind us to go first, threw off the process of what she was doing but the reactions that they both had to our act of kindness seemed bizarre to us. As my dad and I walked out of the store and loaded our groceries into the car, we were laughing and joking about how trying to do something nice confused the man and threw off the cashier. The more the day went on however, I started to think that there was something in that scenario that I was missing. As I kept thinking about it, I decided that the situation that unfolded inside of the store that morning wasn’t as humorous as I initially thought and was instead a sad representation of how acts of kindness aren’t as common as they once were and when they do occur, aren’t trusted as true acts of kindness.

I’m not saying that every situation where people that are doing something nice for someone else isn’t considered genuine or that these acts never happen but when I think back on my childhood, and how I was taught to hold doors for people, be respectful and always looking to help, I realize that this mindset, one that was once very common for people to have almost seems extinct now. We still see folks rally around each other when tragedy strikes and that’s a wonderful thing. We still see people helping neighbors and friends, again that’s awesome. What I don’t see much of anymore is the common act of kindness to strangers the way I used to see it. I can’t help but wonder that if more of people just being kind to others wouldn’t help alleviate at least some of the division we see in our society now. After all it’s hard to be mad at someone who voted differently from you or has different philosophies from you when they’ve just done something nice for you when they didn’t have to and wanted nothing in return for doing so.

Will being kind take away all the rotten things we see unfold on an everyday basis? No, but what it may do is remind the person being helped how much it means to have someone be kind to them and they may want to return that favor to someone else that they run across who needs help. In my opinion kindness and love will always win out over anger and hate. If we as human beings can start looking more in the direction of compassion, then we will be doing something that God designed us for. I confess that I need to tap into that mindset myself more often and am thankful for the events of Thursday morning because it reminded me of how important a simple act of kindness can be and how the world could use more of them.

Don Lindsey is a follower of Christ, son, husband, father, and a survivor. Originally from Dayton Ohio, and resident of Apopka for six years, Don sees his life as a dedication to his wife, parents, children, and community.