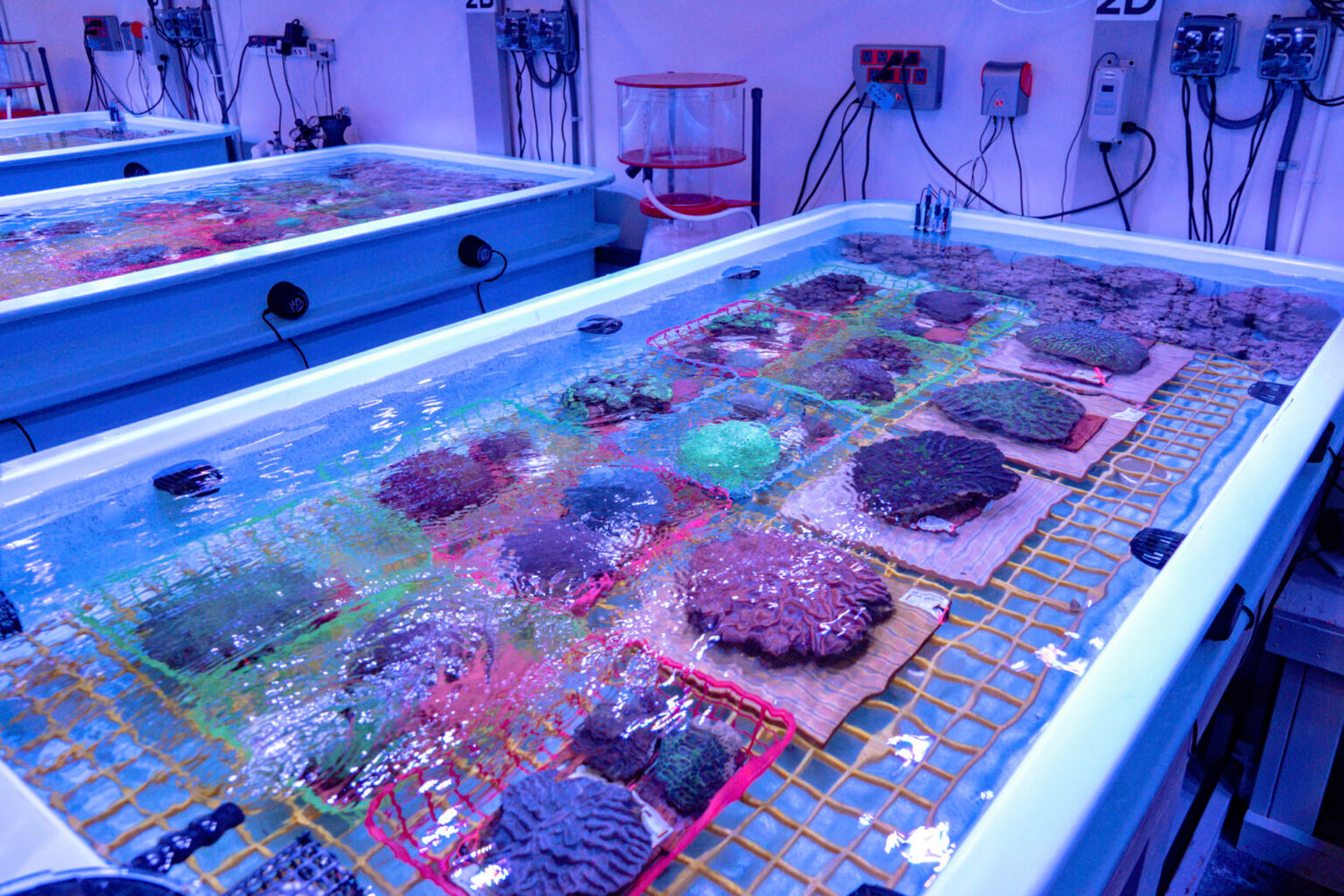 Since 2014, a disease called Stony Coral Tissue Loss Disease has been rampaging through North America’s only coral barrier reef, which stretches for about 360 miles along Florida's southeast coast

About four months ago, I drove over to Orlando and saw something I’d never seen before, something guaranteed to produce a reaction of “Ooooo! Ahhhh!”

It was sort of like seeing the fireworks at Disney World for the first time, only not nearly as loud. While Disney may be the quintessential Mickey Mouse operation, that theme park does do fireworks well.

In an industrial park off the Orange Blossom Trail, I parked outside an office with blackened windows and no name on the door. Someone saw me walking toward the office and opened up before I could knock. Once inside, I could see the reason for all the secrecy.

In one large, eerily-lit room sat tank after tank of rippling water, and in each tank were dozens of corals, looking like weird, grooved rocks.

They aren’t rocks, though. They are living creatures — tiny animals with tentacles — and the work they do building coral reefs is essential for life underwater to exist.

The corals in the Orlando room have colorful names: Green Star, Yellow Finger, Knobby Brain, and Rough Cactus. The list makes for a cutie-pie passenger manifest for a modern-day Noah’s ark.

Each of these corals was transplanted here, to what’s been dubbed the Florida Coral Rescue Center, from North America’s only coral barrier reef, which stretches for about 360 miles along Florida’s southeast coast. The goal: Save their lives so that someday — no one knows when — they or their offspring can be put back where they normally live.

They needed a rescue because, since 2014, a disease called Stony Coral Tissue Loss Disease has been rampaging through the reef like — and I do not make this comparison lightly — COVID-19 through Florida’s mass of vaccination-averse citizens.

Florida is in dire straits without that reef. The corals provide a home and a hiding place for fish, crabs, and other creatures. They also help us humans, buffering our homes and property against flooding from the storm surges churned up by hurricanes. And they lure in ecotourists who want to dive down and see the reef’s colorful marvels. One federal study put the value of Florida’s coral reef at $657 million a year.

How bad is Stony Coral Tissue Loss Disease? Normally, coral diseases affect only two or three species. This one has infected 22. In some places, it has wiped out 80 percent or more of the reef.

“Basically, it’s like there’s a forest fire burning through them,” Jim Kinsler, aquarium curator at SeaWorld and the man in charge of this coral collection, told me that day.

By 2018, the devastation had become so widespread — nearly half the reef had been affected — that the Florida Fish and Wildlife Conservation Commission approved pulling the survivors from the part of the reef that hadn’t been infected yet.

So far, about 2,000 corals have been yanked from their homes and relocated to 22 zoos and aquariums in more than a dozen states. The largest group is in that Orlando industrial park.

To pull off this unprecedented and urgent rescue, Florida joined forces with a wide variety of non-government groups, including two organizations that rarely speak to each other, much less work together: Disney World and SeaWorld. Seeing them cooperate is like seeing the University of Florida and Florida State work together to build a better football program and/or sports drink.

“That’s part of what’s so special about this whole thing,” Jennifer Moore, of the National Oceanic and Atmospheric Administration, who serves as co-chair of the coral rescue team, told me for the story I wrote for Flamingo magazine.

Seeing so much cooperation among institutions, organizations, and corporations “is a bright spot for what can go right when the right people cooperate in a disaster,” Michelle Ashton of the Fish & Wildlife Foundation of Florida, which has helped pay for the project, told me last week.

I agree with Ashton and Moore about how this dire environmental threat has produced an amazing sense of common cause among groups that aren’t normally allies. But I am one of those people who, while cheering for the fire department that’s putting out a big blaze, wonders if an arsonist might be getting away.

Because I am such a buzzkill, I look at an inspiring story such as the coral rescue and ask, “What happened? How did things get so bad? Who’s to blame? And, if nothing else, can we at least kick their shins really hard?”

‘The best interests of the bay’

Officially, nobody knows the answer to these questions. If you ask the scientists, they say they aren’t sure where Stony Coral Tissue Loss Disease came from. Scientists are, by nature, cautious people who avoid saying something they can’t back up.

“There are lots of theories about the ‘cause,’ but I have not seen anything that points to a specific event or location,” Moore told me via email this week.

At this point, scientists say they’re not even sure what it is, much less how to defeat it.

“Recently, the U.S. Geological Survey’s National Wildlife Health Center released data suggesting a virus is probably triggering the disease,” the Washington Post reported last week. “A bacterial infection may also be involved. But without knowing for sure, little can be done to stop it.”

But some people noticed that the initial discovery of the disease in 2014 came in Virginia Key, close to where the U.S. Army Corps of Engineers was deepening the Port of Miami’s channel to 50 feet to accommodate bigger ships sailing through the Panama Canal. In the course of the “Deep Dredge” project, the Corps’ contractor blasted apart and hauled away more than five million cubic yards of rock, limestone, and sand.

To people like Dan Kipnis, a Miami native, former charter boat captain, and a former state Marine Fisheries Commission board member, the Corps’ involvement in dredging so near to the start of the disease is the underwater version of a smoking gun.

The corals off the port were already stressed by the warmer water temperatures caused by climate change, he said. Then along came the port project, which he said sprinkled six to eight inches of fine limestone dust across them after it was excavated from the port.

“That has covered the reefs off Miami,” he said. “When corals are stressed by sediment, the corals get weak and lose their ability to fight disease.”

Kipnis then sent me a story about a 2014 study from Australia that “found that corals exposed to dredge spoil suffered twice the frequency of disease.” In other words, he’s not accusing the Corps of creating Stony Coral Tissue Disease, but of making the coral vulnerable to the infection.

Kipnis has no love for the Corps, a federal agency whose motto is “Essayons,” a French word meaning “Let us try!” and not “Hey, maybe this is a bad idea and we should rethink this before we cause big problems.”

In 1992, the last time the Corps dredged the port, Kipnis told me, he was part of a group that successfully sued because a contractor failed to follow proper procedures in disposing of the spoil. By the time they won, though, the damage had been done, he said.

When the port first began talking about going even deeper around 2011, environmental groups sued again. The Florida Department of Environmental Protection officials in charge of permitting the work in Biscayne Bay — an aquatic preserve — said there was nothing to worry about.

“We wouldn’t have given notice of intent to issue a permit if we didn’t think it was in the best interests of the bay,” one of them told the Miami New Times in 2011. Then the DEP waived the normal water quality requirements for the project.

The port director at the time (later promoted by the Rick Scott administration to be the head of Enterprise Florida) boasted that making the port deeper would create 30,000 jobs. I can name at least one of those jobs that was created. It came from under the table.

The Corps biologist who oversaw the 2014 dredging — and, says Kipnis, kept telling all the enviro-worrywarts that everything was fine, just fine — wound up in 2019 pleading guilty to lying to federal investigators. In addition to overseeing the project, she was secretly on the payroll of the environmental consultant hired to monitor the impact.

However, the Herald added, a study in Marine Pollution Bulletin “said the Corps grossly miscalculated the damage caused to corals. The study, which used data collected by the Corps during the project, found more than a half million corals were killed when plumes of sediment smothered them.”

The New York Times got hold of a study by the National Marine Fisheries Service that said the same thing — that the Corps and its contractors hurt more corals than they admitted. The report “found that as much as 81 percent of the reef near the dredging site was buried in sediment.”

Despite the considerable resources devoted to saving the corals from disease, Kipnis despairs of seeing the natural reef ever come back. The damage that’s been done “is not fixable,” he said. “It’s too great.”

Still, a few corals have survived the ravages of the disease, and their DNA may give scientists clues to what happened. So, of course, it’s time to get ready for the next round of dredging!

Despite all the damage the Corps caused in 2014-15, just three years later the Corps was already talking about expanding the port yet again.

Turns out that when they made it deeper to accommodate the big ships, they were in such a rush to get the job done that they didn’t figure on those ships needing to turn around.

Talk about a Mickey Mouse operation! That’s not an “Oooooo! Ahhhh!” moment. That’s worth a Simpson-esque “D’oh!”

Fooling the corals but not ourselves

I don’t want to leave you in a shin-kicking mood like me, so let me tell you about something else coral-related that’s more uplifting. It was an event that occurred in Apollo Beach in August 2019.

On an otherwise quiet Saturday afternoon, in a small, dark room on the second floor of a wooden building next to a Tampa Electric Co. power plant, scientists fooled a tank full of 30 pillar corals into thinking it was the right time for them to spawn.

The corals, which look weirdly phallic, spewed out clouds of semen and eggs just as if they were still growing in the wild. After about 30 minutes, some 30,000 coral larvae were swimming around in the tank, ready to start building a reef.

This marked the first time that some of the imperiled coral from Florida’s reef had been coaxed into spawning in a laboratory. Since then, the lab, run by The Florida Aquarium, has repeated its success with other species.

You may now say, “Oooo! Ahhhh!” But don’t get carried away. The scientists fooled the corals, but we shouldn’t fool ourselves into thinking this means the crisis has passed or is likely to do so any time soon.

It’s great that they could mimic conditions on the coral reef so well that the corals would spawn in captivity. But corals growing in captivity don’t provide a home to fish, or offer protection against hurricanes, or tempt tourists into turning loose of what’s in their wallets. For that, you need a functional reef out in the wild.

If we ever get that back, that would be the biggest “Oooo! Ahhhh!” moment in history.