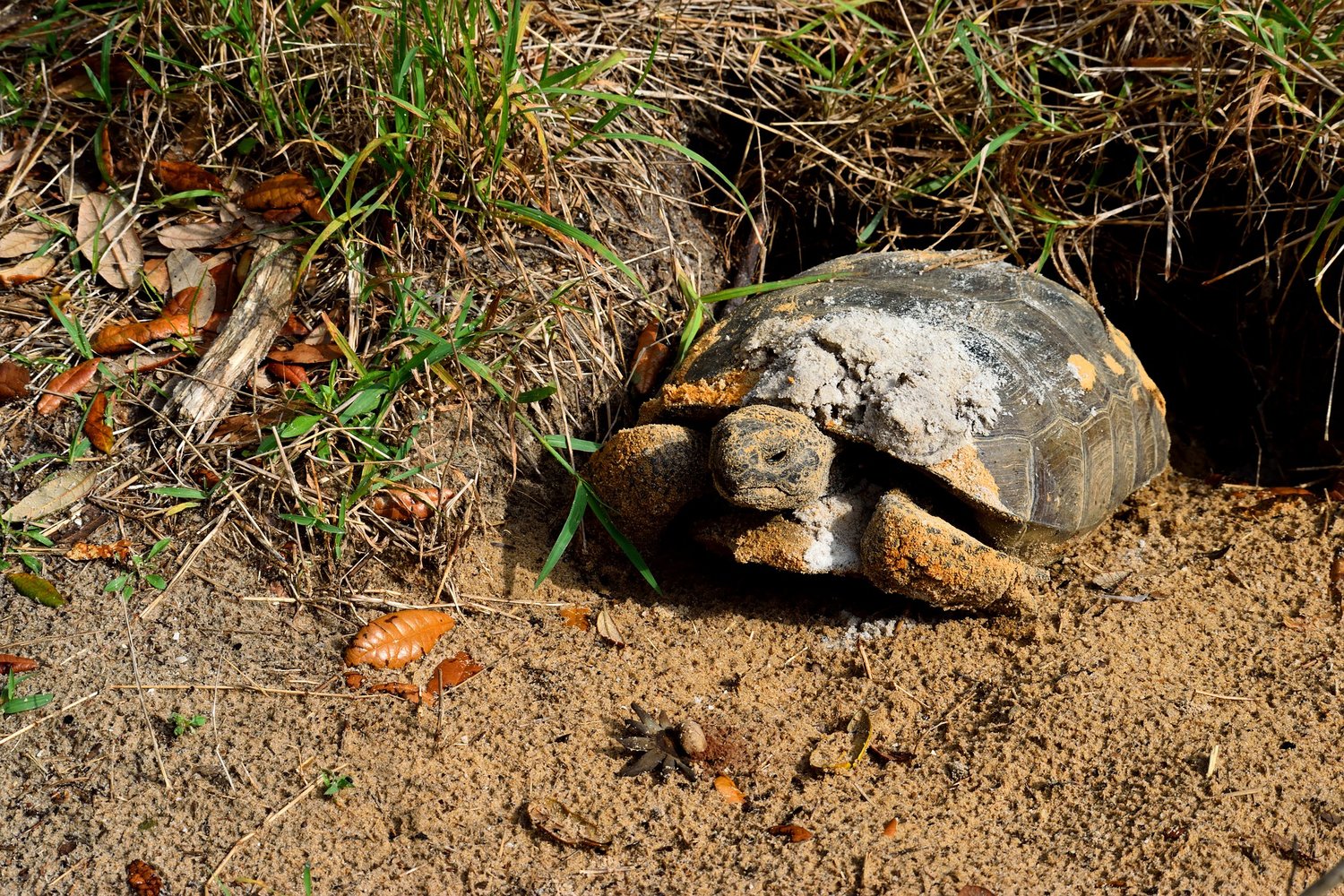 Apopka resident Sue Moyer had a very specific ask of the Apopka City Council at its March 16th meeting during public comments.

"I stand before you tonight to ask you to support no development on the gopher tortoise conservation area. And I'm asking for a motion from the City Council to recognize April 10th as GopherTortoise Day in Apopka," she said.

She also had an ulterior motive that went beyond the proclamation.

"I believe that it's very unethical for the [Rock Springs Ridge] HOA board members to try to swap the conservation area for a defunct golf course in order to prevent any potential building on the golf course," Moyer told the Council. "Why is it okay to build 300 townhomes on gopher tortoise conservation land when we've already been through the discussion that, at the most, they can build 17 homes on the defunct golf course."

Moyer is referring to the latest deal between the RSR Homeowners Association and the Golf Group (owners of the defunct Rock Springs Ridge Golf Course).

"The Golf Group will pay the HOA $1.2 million. It will fix their clubhouse roof, their irrigation system at the clubhouse and repave the clubhouse parking lot," Nelson said. "They [the Golf Group] will develop the 51 acres that they're going to transfer. They will have a 200-foot buffer from Sand Wedge Loop. Obviously... the City of Apopka will help facilitate cleaning up the plan development documents so that we've got just the... what we built on the 51 acres will close down the PUD inside Rock Springs, the current Rock Springs Ridge development."

When 'perpetual' no longer means forever

The swap, however, includes the 51-acre parcel on Kelly Park Road so endearingly called the Gopher Tortoise Conservation Area. Except, unlike a proclamation for Gopher Tortoise Day, the 51-acres is under a conservation easement with the Florida Fish and Wildlife Commission since 2002, which is in effect FOREVER.

So it's a little more binding than a proclamation. However, it's the second part of Nelson's March 2nd announcement that seems to run counter to signing off on Gopher Tortoise Day.

"Now that, I think, is good news," Nelson said. "The challenges still remain... the gopher tortoise relocation and how that is handled, is still to be determined. And I think probably the bigger... the more problematic area will be whether they can move the conservation easement from that 51 acres to somewhere else. So I don't say it's a done deal. I wouldn't even say it's probable, but possibly somewhere between possible and probable. But I think the conservation easement is going to be the real stumbling block because the Governor, who has shown his environmental creds, is going to take a hard look at this. He has to approve this. So if we can get the conservation easement moved, get the gopher tortoises moved, I think the rest of that should fall into place. What we've got to do is give them the ability to build on the 51 acres... and we want to close down the ability to build any more houses on what's already currently there."

I would push back a bit on at least two statements Nelson brings to light here. First, I'm not sure that Florida panthers, gopher tortoises, or manatees would agree that Gov. Ron DeSantis has environmental cred, given the recent plight of all three during his term. But since there has been no reversal of the conservation easement on the Gopher Tortoise Conservation Area, I will hold my ultimate judgment on that matter.

Second, how does a mayor proclaim GopherTortoise Day in Apopka on April 10th, while at the same time rooting for the gopher tortoise conservation lands to be sold and developed? You understand the gopher tortoises don't get to stay in Apopka if the land is developed, right? They either get moved to a faraway land, or they get paved over to die a slow and painful death underneath a new real estate development.

It was the GopherTortoise Council that officially adopted April 10th as Gopher Tortoise Day. In Florida, gopher tortoises are found in parts of all 67 counties and frequently encountered in neighborhoods, along roadways, and in many of Florida's public parks and forests.

Gopher tortoises are considered a keystone species because they dig burrows that provide shelter for 360 other species of wildlife. To put it in terms that illustrate the gopher tortoise's importance, they are, ironically, developers of affordable housing for their ecosystems.

And in 2002, RSR acknowledged that land was to be protected and voluntarily placed a conservation easement on it. Here is just a little of the language of what it would take to reverse that easement:

Acceptance of conservation easements by the Florida Fish and Wildlife Conservation Commission (FWC) is a transfer of property rights intended to protect and conserve habitat for wildlife in perpetuity. Perpetual easements are commonly provided for mitigation and conservation purposes to offset impacts. When a landowner grants FWC an easement, it is understood that the transfer of title interest is permanent and that both parties to the easement understand the intent is for permanent conservation. As stewards for wildlife, FWC accepts these permanent easements with the understanding that the habitat will be permanently protected from development or as otherwise specified in the easement.

That's the first paragraph of an eight-page document, and it uses the words perpetuity, perpetual, permanent, and permanently seven times.

I talked to the FWC last summer when the idea of selling the gopher tortoise lands first surfaced, and they did not make it sound like something between possible and probable.

"The only time a gopher tortoise easement has been “reversed” is when an ITP [Incidental Take Permit] was voided and no action was taken under that permit," said Carli Segelson of the FWC. "In our experience, it has been rare."

I'm sorry RSR HOA. It's not an easy process, because you're not supposed to change your mind once you make the commitment to protect an important and threatened species. You took on the role of stewards of those creatures by setting that land aside 20 years ago. You made the choice, for whatever reason, to protect the gopher tortoises... not just until you find a buyer.

And one last thought for the Apopka City Council. During this discussion, it seemed as though you were more interested in debating the merits of a proclamation vs. resolution. And that's fine. It's important you use your Council to arrive at the best decisions for Apopka. But please, do not vote for a Gopher Tortoise Day only to turn around and endorse mitigation efforts that would relocate or exterminate them later - for the sake of another development.