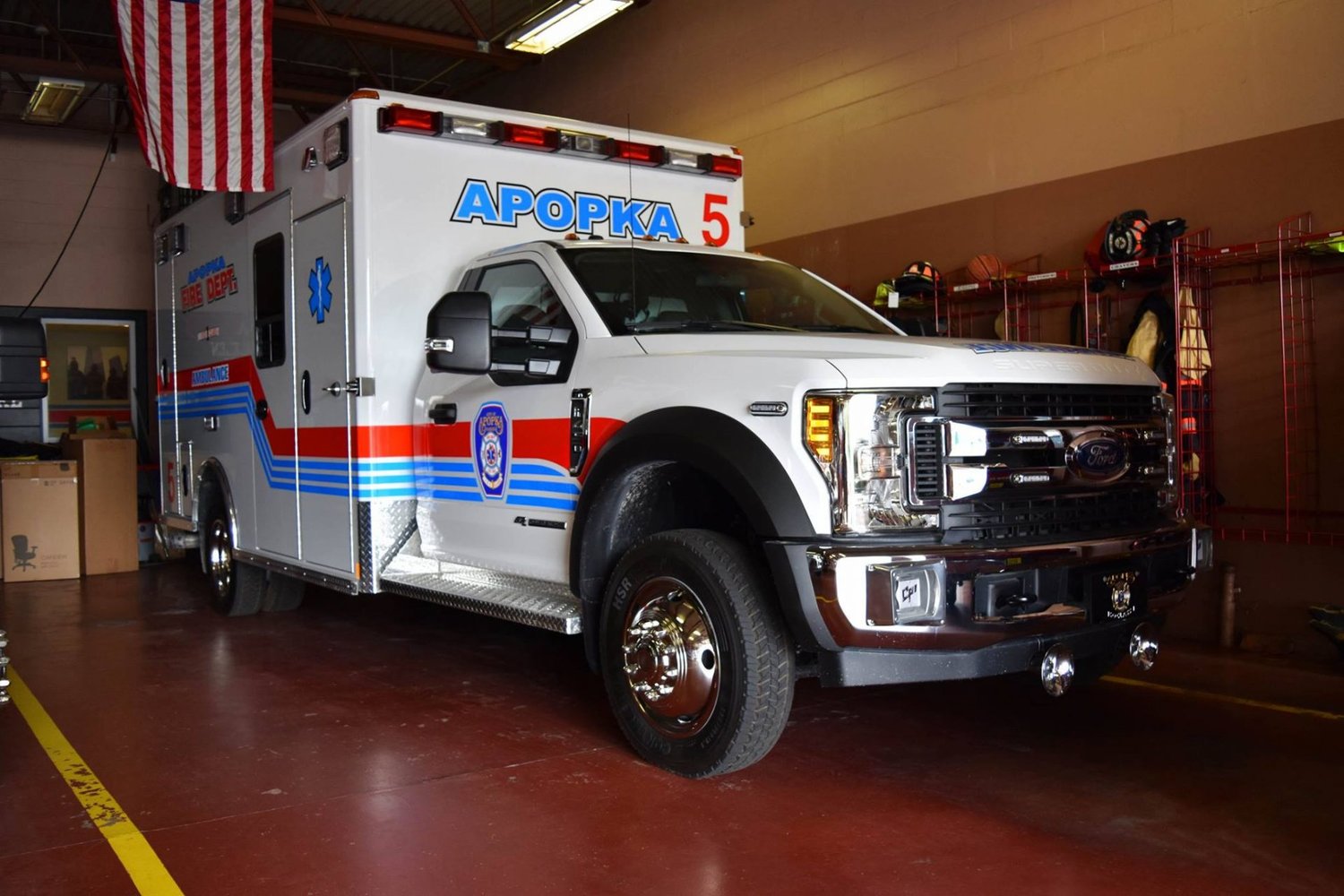 Everything seemed to be going well on the first day of the Apopka City Council budget workshops. Fire Chief Sean Wylam opened the three-day event by outlining an impressive list of accomplishments and goals met in the previous year by the Apopka Fire Department, including an ISO-1 rating (by the Insurance Services Office - ISO); one of only 43 in Florida and the top .8% nationwide, an average turnaround time (from call to action) of 1:15 and 4:52 in response times.

"With Station 6 coming online, we're definitely going to have to add personnel just for that. And beyond that, we're going to make sure we're meeting those requirements."

In his PowerPoint presentation, Wylam pointed out that the AFD has an adequate number of fire stations, staff, and equipment to stay ahead of the National Fire Protection Association (NFPA) minimum standards. It has six fire stations (NFPA calls for only 4.23 for a city the size of Apopka). The AFD has 107 firefighters, which is 1.99 firefighters per 1,000 residents (if it includes the portion of unincorporated Orange County that the AFD services, the ratio is 1.82), which is better than the 1.704 per 1,000 national average. It has four suppression vehicles (2.14 is the recommended minimum), six pumpers (4.23 minimum), and one tower truck where 1.07 is required.

Wylam also noted that calls for service are trending towards 9,000 for 2022, which would be its highest year since 2019 (8,876). Because of this increase and a growing population, Wylam asked for a modest addition to the budget to include adding three firefighters, three district chiefs, and a plan to increase the department size in the future.

"With Station 6 coming online, we're definitely going to have to add personnel just for that," Wylam said. "And beyond that, we're going to make sure we're meeting those requirements."

But then a funny thing happened on the way to concluding his presentation. The commissioners pressed Wylam to ask for more.

How many firefighters should be on a fire engine?

Commissioner Diane Velazquez wanted to know more about staffing fire engines while on a fire call.

"It's a complicated answer," said Wylam. "We're a unique city in that we have 35 square miles and not as dense a population as certain areas. Where we are unique is our squad vehicles. We have two 2-man units. That pretty much augments our manpower in certain applications. We are required to have 17 people on the scene of any fire. ISO and NFPA don't care how those people get there. They just want that manning on-scene."

Wylam went on to explain that because of the square mileage of Apopka and the use of six stations, the plan he has in place is effective.

"We have six fire stations. We're kind of spread out," Wylam said. "We have to use a system that is unique for us because of that, but it works. Now, what I want to see in the future is an increase in manning. We've never had that here, but I want to grow with the increase in population... so as we see that increase, that's when we need to increase those people on the apparatus."

"What is the standard or minimum on a truck?" Velazquez asked.

"None have three?" Velazquez asked. "That's the minimum standard?"

Weighing safety and the budget

Commissioner Kyle Becker followed up on Velazquez's questioning by comparing another station in Orange County and by setting the budget constraints aside.

"Throwing money off the table for a second... I know Winter Park puts three people on their engine, two on the ambulance and I think they have four on other apparatus. Their rate per mile is 8.2, and they have 2.5 per 1,000. If you had the budget, would you pivot your thinking to say 'I'd be staffing my engine at three people per engine'?"

"That's what I'm trying to understand," said Becker. "We're asking how many people are on your engines now... and where, in your opinion, do we need to be now... to be sure we're promoting safety for the people responding to the call. And if we went that route, what additional staffing would be needed to accomplish that?"

"I believe I said this last year, but you'll never hear a fire chief say he doesn't have enough," Wylam said. "But if money is endless? Sure. Budget or not, it's something we want to move forward to in the future. And looking at these populations you're talking about, they're dense. We have six stations in an area we require five. Those people could have been re-allocated, but we wanted to move forward and grow at the same time, and we're looking at it."

"The point I'm making is not the amount of stations," said Becker. "I feel like we're adequate on the amount of stations... or the per-capita. I guess I'm taking it from the firefighters themselves, and the kind of angle I'm coming from is because we are such a large city, an engine with two people... you feel like should be a minimum staffing of three? Because when you get on the scene, and you hope and pray this doesn't happen, but if something goes wrong and we're not able to help a resident, or a firefighter becomes in peril because we should have been at three, and we didn't sit up here [on Council] and discuss how we get it in the budget to three people, what does that look like?"

Wylam pushed back on the idea of safety being jeopardized.

"If we weren't able to provide this many people on the scene in a certain amount of timeframe that's allocated, I'd be jumping up and down screaming."

But Becker pursued his line of questions by moving past requirements, and into situational scenarios.

"I'm going to play devil's advocate... okay, we arrive on a scene. We've made the time to make sure ISO is protected. Eventually, 17 people get there, but if I'm one of the persons who arrive first, and I've got specific duties to get my equipment set up and assess, and it's critical, and that third person could have saved someone's life, and we were up here and didn't provide you with the budget that's most optimal, that's why I want to have that conversation. We've got a 33% reserve fund. If we're saying we would have a better operating model for the fire department to save lives or save department personnel by going to a three-person engine staffing, we've got the money to be able to do that."

"And dollars don't scare me," Becker said. "What we should be thinking about is not how much it costs, but what's the minimum standard that we should have as a department to service our employees and the residents? But I'm just saying... fight for the operating model that you want, and let us worry about how to find it. We're five people up here. My opinion might be vastly different than others sitting up here with me. But don't let the first conversation be - 'well that's going to cost $2.5 million'. Okay. That's interesting. But what do we get for that? And if we get a bunch out of it, then let's have that conversation."

"I'm just saying... fight for the operating model that you want, and let us worry about how to find it."

"I don't want you to think I didn't want that," said Wylam. "I'm trying to apply, as a manager, based on our size, our population, things that we can model. Because when we are sitting at 75,000-100,000 population in 5-10 years, we're going to need more than that. That's something we want to project and that's why this year I'm asking for three firefighters to get us going in the right direction."

Commissioner Alexander Smith then moved the conversation with Wylam to personnel on hand at the time of multiple calls for service.

"So what happens if there are two fires happening at the same time?"

"And we have the manpower to send 17 people to both fires?" Smith asked.

"What happens if there are two fires happening at the same time? [Do] we have the manpower to send 17 people to both fires?"

"Well, the bottom line is the effectiveness," said Commissioner Doug Bankson. "It's getting the job done. Are our people going to be put into a difficult situation? Or are the people we are responding to going to be put into a difficult situation? And how will we get there and arrive on the scene? Do we get enough people to adequately meet that without putting anyone at risk? Because if that's the standard, then that's the goal. Then we make the money follow that. So we have to set it at that standard... if that's not met, then we have to change it, because safety is the number one job. It really is. That's our number one responsibility, so that's what we need to understand."

Bankson turned back to Wylam for his expertise on the subject.

"I'm not the expert. We're depending on you to tell us if it's not there. And if we really need to be there, then we need to know that and figure out how to get there. Then we can have something clear. That's our goal - the effectiveness, not the cost. And yes, thank God, we have some healthy reserves. And thank God we're more beyond this challenge that we faced last year... so we need to know these mission-critical things and we want to hit those goals."

"I'm not the expert. We're depending on you to tell us if it's not there. And if we really need to be there, then we need to know that and figure out how to get there. Then we can have something clear. That's our goal - the effectiveness, not the cost.

"This is an ongoing process that I want to start," said Wylam. "Starting with six this year (three new firefighters, and three district chiefs). And Commissioner Becker, the number I gave you [$2.5 million] is to hire 45. So, it's a large number to get us to the growth moving forward."

"It's not as simple as the per-capita number," said Becker. "It's the per-capita, it's the rate-per-miles because of the geographical vastness, and then what's the right operating model for the safety of both your staff and the residents? And all three of those are different, yet the same conversation to drive all three. But I want to make sure we're just set up to have staff that feels like they're safe."

Will omicron – the new coronavirus variant of concern – be more contagious than delta?