Community First: It's time for changes on the Rock Springs Ridge HOA Board 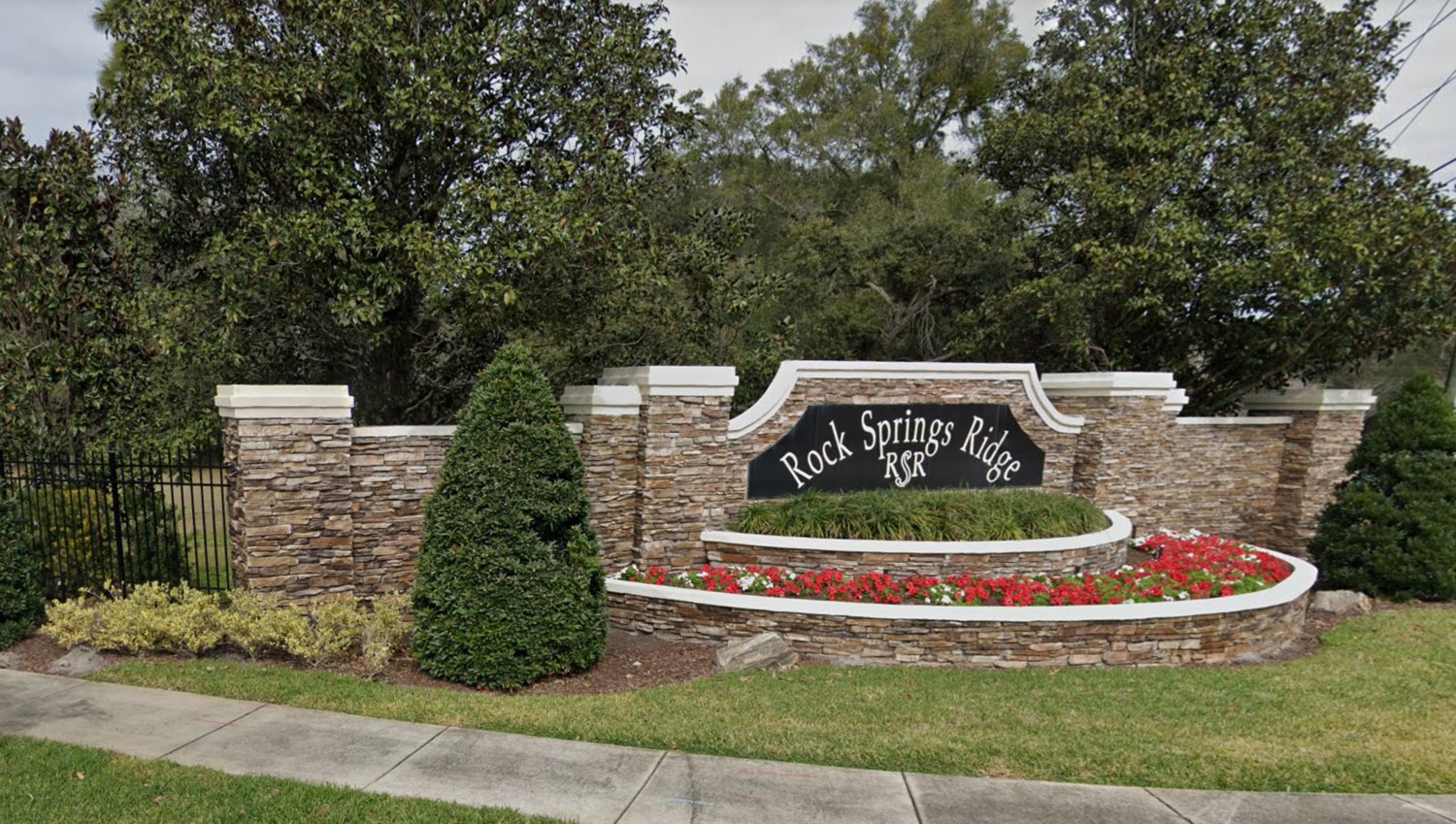 It's a word filled with warmth and positive feelings. Who doesn't want to belong to a tight-knit community? One where neighbors take pride in their living environment, respect and support one another regardless of age, gender, race, or creed. A good community is a safe, cohesive, confident, prosperous, and happy place to reside. It embodies many of the qualities that make America a great country.

Rock Springs Ridge, no doubt, started out as a great community.

Despite being the largest development in Apopka with 1,320 homes, it added value to its neighborhoods by building a golf course with 27 holes meandering their way through the area's rolling hills and backyards. They also did their part to preserve the fragile ecosystem and environment that bordered its property by voluntarily deeding two large tracts of land (51 and 40 acres) to the Florida Fish and Wildlife Conservation Commission (FWC) as environmental easements.

They named one of them the Gopher Tortoise Conservation Area.

All was well in RSR until a series of events changed this community.

In 2005, the Golf Group bought the RSR Golf Course. In 2014, they closed it. Years passed, yet no development emerged - only threats to build houses, and dramatically high prices to purchase the golf course lands.

Then, in 2020, a newly elected homeowners association began taking bold, controversial moves to buy the golf course lands from the Golf Group. First, they attempted to trade properties with the City. Then, instead of borrowing the money to pay back the City, they tried to sell the 51-acre gopher tortoise lands despite a perpetual conservation easement attached to the property.

After several months, that plan evaporated.

Now, the HOA has offered to trade the 51-acre Gopher Tortoise Conservation Area with the Golf Group for the golf course lands. It's a plan that has divided this community in every way imaginable.

And following an HOA meeting last week, RSR has unraveled into an adversarial, chaotic and dysfunctional community.

During the marathon three-hour session, held at the Apopka Amphitheater, Board Chairman Gary McSweeney outlined the latest letter of intent received by the Golf Group - which according to Board member Michelle Chase, was revised again just hours before the meeting.

"When we were elected in 2020, we were elected on a platform of two issues - one was to prohibit development on the golf course, and the second was to acquire the golf course if at all possible," said McSweeney. "This had never been attempted before, but we took it upon ourselves to attempt this because if you look at the history of this community, it's deserving that we should address this issue. It's been 14 months, and we finally have in front of us a letter of intent."

Yes, it has been 14 months, and yes, you do have a letter of intent in front of you, but that journey was paved with a lot of other offers, proposed swaps, letters of intent, and bad intentions.

A new land swap with the Golf Group

After a series of offers and counteroffers, the Golf Group and the HOA agreed to swap the RSR golf course lands for the 51-acre Gopher Tortoise Conservation Area on Kelly Park Road. The Golf Group pays $1 million, an additional $300,000 for upgrades in irrigation, the parking lot, and the clubhouse/restaurant roof. The Golf Group would also have to deal with the many incumbrances of relocating the gopher tortoises from the 51-acre Gopher Tortoise Conservation Area.

For the sake of word counts, I'm not going to explain all the reasons why it's a bad idea to break an environmental easement like the one that is on the Gopher Tortoise Conservation Area, but I will leave you with several articles on the subject that include how it usually goes for gopher tortoises when they are relocated:

The letter of intent gives both parties 120 days to review the terms of the deal, and I suspect the Golf Group will use that time to try to figure out a way to break an FWC environmental easement written to be a PERPETUAL document.

But what will happen to this community in 120 days?

After McSweeney presented the LOI, the meeting devolved into a series of public comments, primarily aimed at its contempt for McSweeney, fellow Board member Michelle Chase, and other residents of RSR.

"This proposed deal is suspect in so many ways," Olson said. "Gary [McSweeney] and Michelle [Chase] have spent over $300,000 of our money playing upon homeowners' fears and frustrations through misrepresenting facts. Due diligence is lacking. No scope of work. No competitive bids. The sudden production of environmental surveys submitted by the owner is, at best, suspect. This is equivalent to a home buyer or mortgage company accepting the current homeowner's appraisal or home inspection. We must have competitively bid cost estimates, independent environmental and physical plant inspections. Serving on a Board is an honor and privilege. This carries the responsibility and the obligation to operate within legal, moral, and ethical standards."

Olsen referred to the $300,000 in attorney's fees that this HOA has spent to pursue its white whale - the golf course lands. It's an exorbitant amount of the resident's money to attempt to close a real estate transaction, especially when you consider this inexplicable comment by Chase on the RSR nextdoor.com site:

"Gary and I have been splitting a $400 per hour attorney to get HOA legal advice (we are not getting any direction from our HOA attorney)."

In the limited amount of time I have spent at workshops and City Council meetings watching the performance of HOA attorney Kurt Ardaman on behalf of RSR, I doubt it's his counsel that's holding back this deal or this HOA. But I guess my question would be, if his advice isn't resonating with McSweeney and Chase, why did the tab get to $300,000? I can only imagine the outrage in Apopka if members of the City Council posted on social media that they hired a private attorney to help them with City issues because the City Attorney was not giving them good counsel.

The loss of a longstanding relationship

After the meeting, it was also learned that Specialty Management, an HOA management company that has worked for RSR for over two decades, terminated its agreement.

In its letter to the RSR HOA Board, Specialty states:

"At this time, we feel the current business relationship our team has with Rock Springs Ridge is not sustainable under our current agreement and it is in the best interest of Specialty Management to direct resources to other business opportunities."

It also added this caveat to the termination letter:

"If the newly elected Board is interested in discussing ways that we could possibly restructure a new agreement that works well for both parties we would welcome that opportunity."

After last week's HOA meeting, RSR is at its most dysfunctional. The Board has lost its management company, made public statements critical of its attorney, and viciously attacked one another and residents on social media and in public. Whether they gain the golf course lands, the community is split, adversarial, and at odds.

This HOA Board has lost the credibility it needs to lead RSR.

And in the end, is it worth putting a community through this level of stress, destroying a gopher tortoise refuge, and bringing new development into your resident's backyards just to call the golf course lands your own when they have sat dormant for years?

And while I'm asking questions...

Businesses like the Golf Group don't make threats unless that is all they have at their disposal. If they could act, they would. Why else would they give the HOA 14 months to come up with elaborate land swaps with the City, and on gopher tortoise lands with environmental easements on them? Why would they trade 311 acres for 51 acres if they had any chance to profit from those lands?

We will, however, make this point:

If ever there was a reason to change board members, it is after the train wreck that has occurred under the leadership of this Board. It has racked up massive attorney's fees, only to later say their counsel is inadequate. They lost their management company after two decades of service.
They lost HOA Treasurer Jerry Schafrath, who wrote a scathing resignation letter about the Board's conduct. They have been held hostage by the Golf Group when it is RSR that should hold leverage on this deal.

It's time for Rock Springs Ridge residents to bring civility and normalcy back to the HOA Board. It's time to put your community first, and not continue down a path of making a deal at all costs. Election Day for the RSR HOA is April 5th. Judge these candidates by their actions, and let the past inform your expectations for the future.

I hope you make a wise decision.