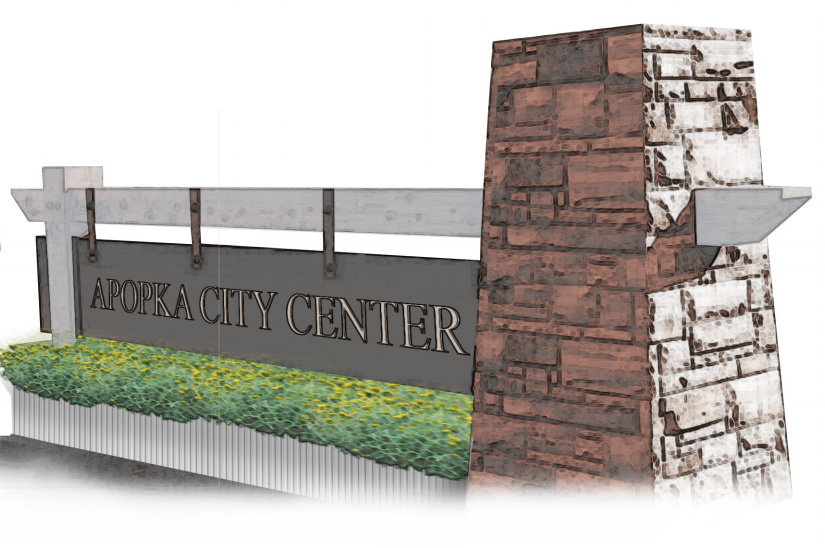 An unnamed coffee shop, a flagship restaurant, and a commitment to begin construction on the first phase of the Hilton Garden Inn relatively soon highlighted the update given to the City Council regarding the City Center project.

Technically, the Council heard a proposal on the Final Development Plan submitted for the Apopka City Center Hilton Garden Inn Hotel at its Wednesday meeting, however, the broader subject of the project was discussed during the presentation by Apopka Community Development Director James Hitt.

This was the first time the project has appeared before Mayor Bryan Nelson and City Commissioners Alice Nolan and Alexander H. Smith since taking office.

The City Center, which is expected to comprise approximately 35 acres centrally located at the interchange of U.S. Highway 441 and State Road 436, is proposed for 207,000 square feet of restaurants, retail, and office space as well as a hotel and homes. Eleven acres are proposed to be a community park, pond, and boardwalk. The long-term plan, which phases-in the project through the next 20 years, includes a possible 180 acres of development.

The Hilton Garden Inn will be located within the Apopka City Center development, specifically on the northeast corner of McGee Avenue and East 6th Street. However, circumstances had changed since the last City Council update back in 2017. According to Hitt, Taurus Southern Investments (the developer of the City Center project), had to revise its plan due to the inclusion of the Highland Manor to the overall project.

"Taurus purchased the Highland Manor and the parking lot on the south side last year. And they're actually in the process of purchasing the small building on the west side of the City Center. One of the things the master plan did not take into account was that Taurus did not have to keep the Highland Manor. But they decided to keep it, and they put about $300,000 into fixing it up and made it a showcase again. So in order to take that into account, the master plan did have to change. The hotel was moved above the main entrance road to the main parking lot. The other thing that's interesting with the concept plan is that the spatial analysis that's used for the square footage is not accurate. They had the northern portion lined with buildings all around and the amount of square footage was between 80,000- 200,000 square feet. The problem with that is that you have to park that too. So it was actually unrealistic to show that amount of building square footage on a smaller piece of property."

Hitt explained that the revised plan moved buildings to compensate for the additional parking, but Commissioner Kyle Becker was concerned with the revisions.

"I'm not getting a warm and fuzzy feeling when you open up the presentation and say a plan that you presented to us before, that we approved, is unrealistic. So I'm curious as to why I should have faith in what this is when you open up remarks that way?"

"Our understanding was that we would have a square parking lot, and if the demand was there, you would build vertically. So there is a concern."

It was also learned that multiple designs for the Hilton Garden Inn have been rejected by the Hilton corporation.

"From a color standpoint it (the proposed design) blends nicely with the Highland Manor, but from a roofline, it doesn't and I think the intention was to try and marry the tin roof style the Highland Manor has," said Becker.

Kim McCann, of Eleven18 Architecture, explained that over 20 designs have been submitted to Hilton, but they have rejected on each one. The current design shown to the City Council was under review by the Hilton Corporation and pending a decision.

(Note: An approved Hilton design is pictured in the above photos)

Commissioner Doug Bankson too had questions regarding the starting date.

"I did want to ask about the timeline because next month it will be 24 months since the signing and I'm curious at what the delays are? I thought there was an 18-month initial timeline."

"The sales and purchase agreement and the development agreement didn't jive quite with each other in regards to purchases," said Hitt. "Within 18 months they were supposed to purchase a parcel. Within 48 months they are supposed to purchase a second parcel. They purchased two pieces and they are in the process of purchasing two more pieces. In terms of purchasing property, they are on schedule. The development itself does not have to occur, according to the contract, unless the roads are completed for construction."

"We expect we will begin construction relatively soon to try and complete the first phase of our construction meaning the hotel and the other parcels I mentioned at the same time the road work is being completed."

"We are also acquiring one acre at McGee (Avenue) and Main Street for a future unnamed coffee shop."

He also described buildings for a retail deli and flagship restaurant.

"We haven't identified them yet, but it's a matter of developing out the bulk of primary uses and in conjunction with the new roadway work, including the most important part which is the traffic light (at McGee Avenue and Main Street). That's going to be the most important piece to getting people in and out of the City Center. And the Florida Department of Transportation claims their permits will be out in two to three weeks."

In addition, he also said Taurus was exploring the idea of bringing a multi-family development on 12 acres south of Sixth Street, office space and mixed-use space on the west side of McGee Avenue and high-profile restaurants and grocery stores on the north side.

"We are excited about the Taurus Group bringing the Hilton brand to the Apopka Town Center," said Nelson. "It's been a few months since we got an update, so I thought it was important to see what's going on."

Nolan too was upbeat at the project's progress.

"I am excited that things are moving on the City Center and that we are making sure that everything is coming together as the community envisioned."

Smith was happy to get his first update on a project he is getting a lot of inquiries about.

"I've been approached by a number citizens with questions about the town center project. As one of the new Commissioners on the Council, I was not able to give an intelligent response, but after hearing the update at the Council meeting I'm in a better position to respond to those inquiries. Even though the first phase is a year from completion, I'm excited about the progress that was reported. I'm sure the citizens of Apopka and visitors alike will be pleased with the project once it is completed."

Becker too was optimistic, but with reservations.

"I am pleased to see some movement towards making the downtown development a reality, however, I am very focused on ensuring the final product is what we agreed to and what our community will take pride in. Hilton is a great brand for Taurus to partner with, and based on my comments during the meeting, my interest is that the final design compliments and conforms to the design standards we set in place to ensure the hotel space plus the eventual restaurant, retail, and residential all have a unified feel playing off the anchor to that property, the Highland Manor. This development is a long time coming, and I'm excited to see what’s in store."

Bankson was happy with the update, especially the commitment to begin work on the first phase at the same time the roadwork is being done.

"I was very pleased to hear that Taurus has committed to moving forward congruent with the road infrastructure. This will save us from needless delays. With the potential for both a popular coffee shop and restaurant on the horizon following the building of the Hilton Garden Inn, we should be seeing the core of the town center taking shape. Hopefully, there will be no major delays."