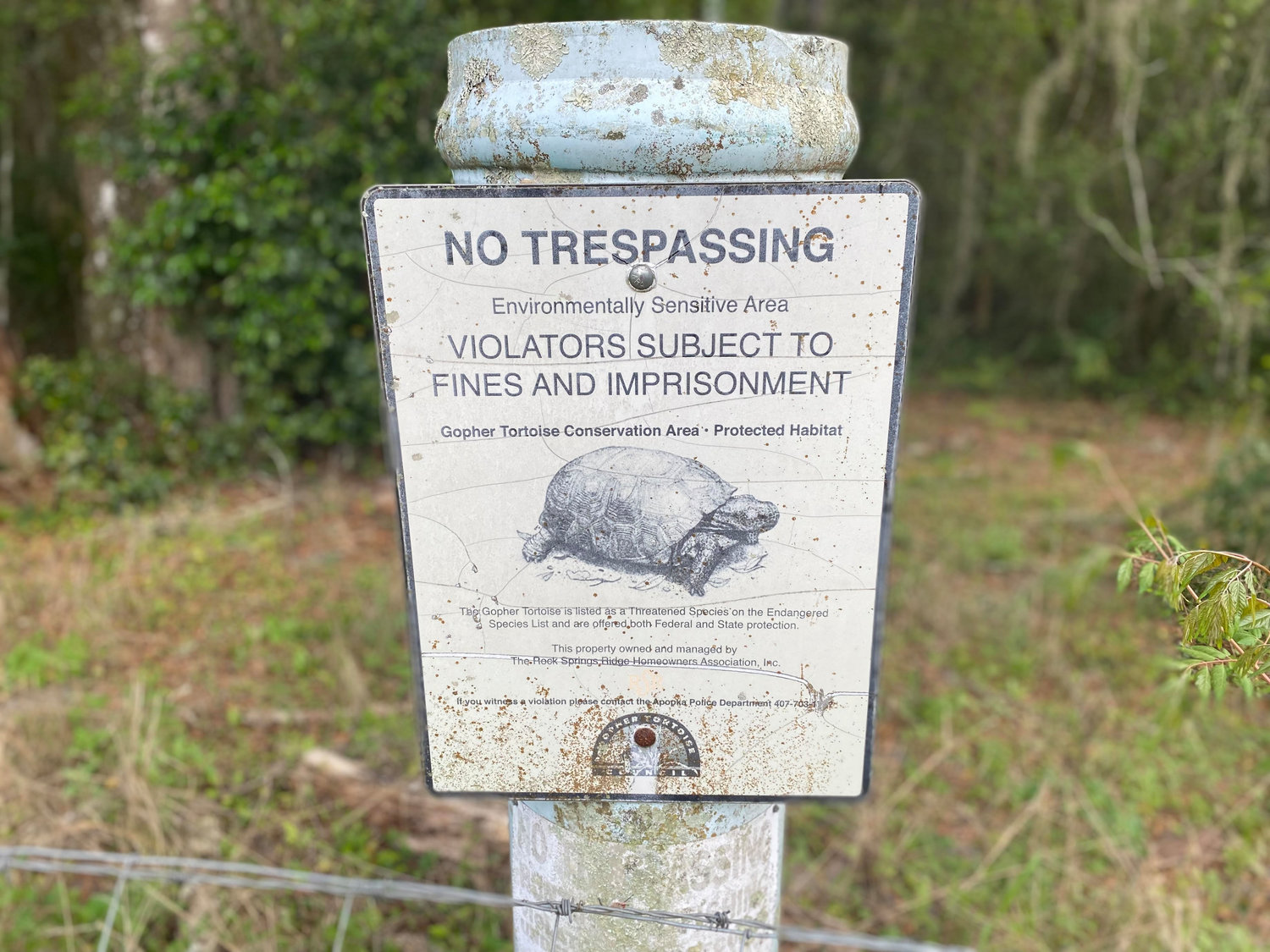 The signs still remain on the Gopher Tortoise Conservation Area for all to see.
Posted Wednesday, December 31, 1969 7:00 pm

In Apopka, it's not so much a celebration of the gopher tortoise as it is a fight for the species' very survival in its own habitat. A habitat allegedly protected in perpetuity, according to the State of Florida.”
By Reggie Connell, Managing Editor

"The goal of Gopher Tortoise Day is to increase awareness and appreciation for these long-lived, gentle reptiles. In Florida, gopher tortoises are in all 67 counties, frequently encountered in neighborhoods, roadways, and many of Florida's public parks and forests. There are celebrations and events in other cities and at Florida State Parks to build awareness, learn about tortoises, hear their stories of survival, and get an up-close look at this fascinating threatened species."

But in Apopka, it's not so much a celebration of the gopher tortoise as it is a fight for the species' very survival in its own habitat. A habitat allegedly protected in perpetuity, according to the State of Florida.

Before the vote, which went in favor of Gopher Tortoise Day 5-0, City Attorney Michael Rodriguez wanted to make it clear that the resolution itself was not binding in any way.

"This is a ceremonial resolution," said Rodriguez. "So these are really aspirational goals in order to bring forth awareness. This resolution does not have the effect of law... does not have any regulatory or administrative authority over the City, but is merely a ceremonial proclamation declaring a day for gopher tortoise day and bringing awareness."

But Commissioner Kyle Becker wanted to add meaning to the resolution.

"The heavier weight on that "whereas statement" is vital for the conservation and long-term survival," said Becker. "So that's the spirit of that particular line."

Michelle Chase, a newly re-elected member of the Rock Springs Ridge Homeowners Association Board working on a land swap of the Gopher Tortoise Conservation Area for the golf course lands at RSR, wanted confirmation that the resolution would not harm the deal.

"I guess I'm going along because this has been brought forward to you by some of our residents, of course, because you know that we're going to be selling that parcel that has an easement on it," said Chase, not convinced by the definition Rodriguez gave to the resolution as ceremonial. "So I ask, when that petition or that application comes up here, what bearing is that going to have on that?"

"We have no bearing with that conservation easement, so the city has no interest in that," Becker said.

"Okay. That's what I was asking," Chase said. "If the proclamation is going to have any bearing on it. It's our parcel, and it is our easement or the developers to remove... just wanted to make sure that one doesn't affect the other."

"Well, I think the purpose of the resolution... the spirit of a conservation easement in its current form is a state of perpetuity," said Becker. "And I would think that when the state agency that is looking at removing that... or doing anything differently with it if they look at their local municipalities, they will see value in the preservation or protection of that species that would bear some sort of weight in that decision-making process."

After hearing Becker's statement, Mayor Bryan Nelson asked Rodriguez to clarify what this resolution would entail concerning the easement on the property.

"Local governments do not regulate in terms of these environmental regulations," said Rodriguez. "It's going to be deferred to the state. And especially the way that the legislature conducts itself. Any type of override can expect a pretty hefty slap from the legislature if we were to overreach into those areas. And again, this is a ceremonial proclamation. This would be like proclaiming... Willie Mays Day." 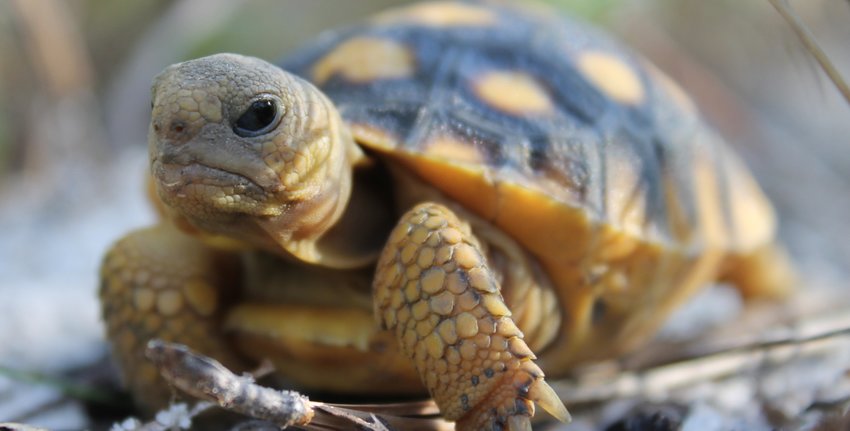 Two weeks ago, Nelson seemed to be in favor of developing the property when he said this at the March 16th City Council meeting:

"The challenges still remain," he said. "The gopher tortoise relocation and how that is handled is still to be determined. And I think probably the bigger... the more problematic area will be whether they can move the conservation easement from that 51 acres to somewhere else. So I don't say it's a done deal. I wouldn't even say it's probable, but possibly somewhere between possible and probable. But I think the conservation easement is going to be the real stumbling block because the Governor, who has shown his environmental creds, is going to take a hard look at this. He has to approve this. So if we can get the conservation easement moved, get the gopher tortoises moved, I think the rest of that should fall into place. What we've got to do is give them the ability to build on the 51 acres... and we want to close down the ability to build any more houses on what's already currently there."

But Becker, in response to Rodriquez, wanted to make it clear he was not simply passing a "Willie Mays Day" kind of resolution but making a statement supporting the protection of gopher tortoises.

"I'm not going to sit here and waste time passing a resolution that I think is just ceremonial... that doesn't mean anything," he said. "I'm going to approve a resolution because I think that there's value in protecting the species called the gopher tortoise. And I think that's why I made the comment that I did. I am fully aware that the City has no bearing on the decision of whether or not that conservation easement exists for perpetuity, as it is stated, or it comes away and is done differently. That's not the purview of this Board. But I will say that there's value in having it there. And that's my opinion. That's why I would support passing a resolution like this."

Sue Moyer, who initially suggested the resolution at the March 16th City Council meeting, explained that protecting this threatened species is a longstanding tradition in the state.

"Gopher tortoises have been protected in Florida since 1975," she said. "This is not something that's merely a ceremonial thing. Students were taught this when our development was put forth in the late 90s. In April 2002, they had to set aside this area, this 51 acres, the gopher tortoise area, all across our neighborhood to be able to build there because there is value in protecting the species because they are a keystone species. And 350 species require the burrows that the gopher tortoises make for their survival. There's a whole ecological system that goes around the gopher tortoises. So that's more than just something ceremonial. It's living out and protecting our nature and not just doing something that doesn't mean anything. I agree with Commissioner Becker. We need to start protecting our species and not just building over them or doing the "pay for play" that many developments seem to get away with and then just pave over the gopher tortoises and have them suffocate underground so that we can put in more buildings."

Not convinced that her last trip to the microphone resonated enough, Chase returned to offer an alternative idea for Gopher Tortoise Day.

"That's great, and if you're going to do that, I would ask that the City find all the turtles in Apopka and note where they are," she said. "Not just the ones that are on the 51-acre conservation area but on the 318 acres of land that we're trying to purchase... they're all over Apopka, so if we're going to have the day, I think you should recognize that on all homeowner parcels."

Wow. Let me see if I can clear a few things up for Chase and the new Board before they start their term next week.

First off, the resolution is for ALL gopher tortoises (as opposed to turtles) in Apopka. And I understand you may feel singled out as the Cruella de Vil of gopher tortoises. But, here's why.

There are no gopher tortoises in Apopka living in peril except those in the Gopher Tortoise Conservation Area. The place they should be most secure. You remember that property. It's the one you so cleverly call the "51-acre Kelly Park property" or the "out parcel". But at the end of the day, it's still the Gopher Tortoise Conservation Area. If you aren't sure, there are still signs marking it. It's under an environmental easement that YOUR BOARD willingly agreed to in 2002, which is perpetual - that means forever.

And forever is a long time - well over 20 years.