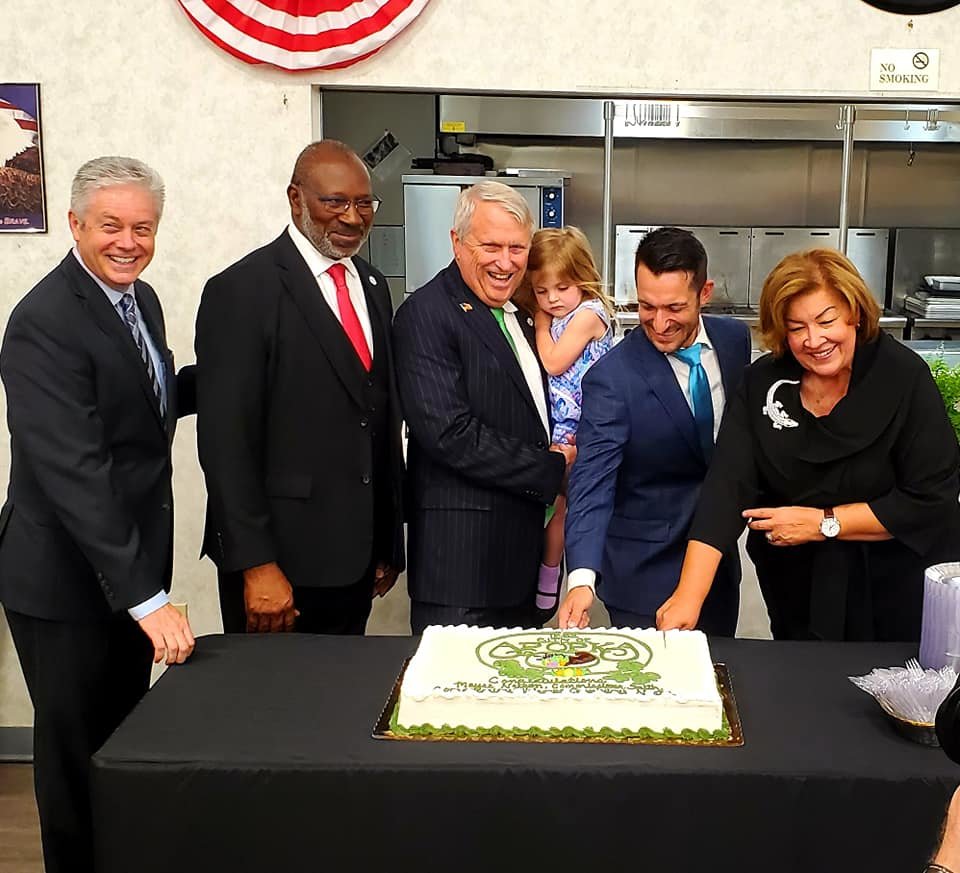 The budget process in Apopka is usually cut-and-dried.

Department heads present their plans to the Council at three workshops. The Council is given the opportunity to make tweaks, or changes, wrestle over the millage rate, and ultimately come together and sign off on the tentative budget and proposed millage rate.

A couple of months later, the Council is again presented with that millage rate and budget for them to approve. It's designed to be a formality by the time it gets to that stage.

But at the September 7th budget hearing, formality was met with urgency.

City Administrator Edward Bass presented the 2022/23 budget to the City Council for its first of two votes to make it go from tentative to final. It was the fifth time he presented the budget to Council. Bass outlined the highlights:

21 new full-time positions have been added. Performance-based merit pay, up to 6%, is included for all full-time employees.

Everything seemed to be rolling along until they reached the proverbial elephant in the room... or, in this case, the five-alarm fire in the room.

The final budget for the Apopka Fire Department budget.

Wil Sanchez, the AFD's Division Chief of EMS, pinch hit for Chief Sean Wylam in presenting a revised budget plan and explanation of current action taken by the AFD following the tragic death of firefighter Austin Duran. Since the workshops, there has been a citywide push for additional safety, training, and staffing to be added to this budget.

Sanchez and Bass explained to the Council that adding firefighters this year could potentially create infrastructure nightmares for the fire stations, which are not equipped for additional personnel. It was an objection that the Council met with skepticism.

For more details on the presentation from Sanchez, go here.

It was a long day for the Council, which began with a four-hour regular meeting and then a budget hearing that lasted 2.5 hours. But it was not long enough to let the issue of the AFD go without significant pushback.

"We can get some rough numbers quickly,"said Commissioner Nick Nesta. "That's not impossible to do. We can definitely do that. I mean, I do that on my own investment properties. You can call somebody and say here's the general-ness of what I want to get done. Give me a million dollar range. where's it gonna lay in? I think we can do that just to put our heads in the right mindset of, hey, we need to budget $50 million."

"We'll get the ball rolling,"said Bass. "We will start and get the plan down and bring you information as quickly as we can bring it to you. But I don't want to bring in a number, say $10 million. So you're gonna tell me, Well, how much which plays? How many steps do I need to know, will it support four on a truck? Will this site even work? If this site doesn't work, we will have to figure out where we will place a station."

Despite the challenges thrown out by Bass, Nesta wanted to make it clear he wanted resolve before the Council's final vote on September 14th.

"We're going to have a very rough meeting this next budget meeting if we don't have this fixed in some capacity. I don't want to get... I hate the whole 'we will get a second bite at the apple'... we can fix this. This is fixable, and it's fixable, sooner rather than later. I understand there's other priorities that maybe the administration... you guys have, but we can do this. And I'm happy to get in there. I can put my own staff on this to make it a priority."

But Bass wanted to make sure Nesta understood the potential peril dipping into the reserves could cause.

"Well, here's what I'm gonna tell you. You set your millage rate. If you're going to add those those kind of dollars to this budget you'll have to cut, you'll have to tell me where do you want to cut? In other areas. Or you can go into reserves. But just keep in mind that we're saying if you borrow from those reserves, how far you go down, we have a storm... just be prepared when I come to you and tell you I need to borrow money for a storm. Just be prepared. That's all I'm saying."

As heated as the room was getting during the discussion between the Council and administration, public comments only inflamed it more.

Commissioner-Elect Kyle Becker, who will make his return to the City Council in November, reminded the Council that a majority vote can still make a commission-backed initiative happen.

"I wasn't going to speak tonight, but that presentation was an eye opener,"Becker said. "And quite appalling. If you asked me, we've been talking about properly staffing our fire department, not two months, not six months, not two years, really for the entirety of since we've been on Council. And the idea that we could sit in these chambers tonight, and this administration has zero insights on how much it would cost to retrofit our departments. Even if we weren't able to staff to the expectations that we all want and to National Fire standards, to say that we wouldn't be able to quarter them? And to sit here and say that we have no idea how much it would cost to be able to service those firefighters... are we kidding? This is maddening. And I don't quite understand the city administrator's friction when clearly you all want to do something here and it's not, oh, we can allocate 10 million or we could do this. I'm not sure we can, you know, you as a council have the ability to say no... this is what we're going to do. You all can prioritize the acceleration of getting the capital expenditures to properly retrofit those stations. If it means new stations, so be it. If it means more firefighters, let's do it. You all can work past the deficiency of this administration not to put emphasis on knowing what it's going to cost to do this. Remember, it takes three votes... three votes only. And I'll see you in November."

Jeff Tyre, and Apopka resident and retired AFD Assistant Fire Chief with 32 years of service, was also skeptical of the challenges described by Bass.

"When I started in 1984, we had two people on the fire engines. It's 2022. And there's two people on fire engines. It's time for change. The 18 firefighters that Chief Sanchez talked about has to happen. We can't put firefighter safety and community safety aside because of some cramped quarters. That's ridiculous. We're adding six firefighters in this budget year. Correct. And we're putting them at stations two and three. Correct? Where are we putting them in? What are we doing? We're adding another bed. Correct? Why can't we add another bed to station four, five and six. It doesn't make sense to me. We have students that ride overnight. Correct? They stay at those stations. They sleep in one of those extra beds. Let's put a firefighter in those beds instead of a student. That's the clarity that you're looking for here. Add a bed. We're not talking about retrofitting stations. That's silly. We're talking talking about adding one bed to each one of these stations. 18 people. If we got to go buy a bed and a chair, let's go buy a bed in a chair. 18 people. Our city deserves this. The firefighters deserves this. Austin deserves us. Let's make it happen."

At its conclusion, the Council voted 5-0 in favor of the millage rate and budget, but with the clear understanding that it wanted the flexibility to add additional firefighters to the final budget.

After the meeting, both Becker and Alex Klepper, President of the Apopka Professional Firefighters Association, released statements to The Apopka Voice:

"I thank the Commissioners for taking a strong stand and demanding our Fire Department gets the type of staffing that marches us towards national standards while also providing respite to those in the department working double shifts and unnecessary overtime," said Becker.

Properly staffing our department promotes our public safety responsibility to residents and businesses and ensures the brave men and women of Apopka Fire can do their jobs safely.  I am deeply disappointed that those in the Administration tasked with coming up with a plan on how to hire and house proper staffing levels have chosen not to do so, nor can they articulate a short-term path to coming up with the plan.  This is a critical need, a clear priority for the Commissioners comprising a majority of Council, and it needs to be addressed now, regardless of the Mayor’s or City Administrator’s opinions on the matter."

"There’s a sour taste in our mouths," said Klepper. "The impassioned speeches at council [Wednesday] night drew many tears from our eyes. We want to celebrate what seems a moral victory but I can’t. We want to say “we did it!” but at the same time we know that Austin is lying in the ground and not able to share it with us. What kind of victory or “I told you so” moment is it if we had to sacrifice an innocent young man’s life to achieve the minimum that we’ve been shouting about for years?

We are happy that Chief Sanchez was honest and clear with the information he provided during the workshop this time around and we cleared the hurdle of pretending that two firefighters on an engine is acceptable, so now the conversation, at least, has turned to a more publicly relatable question of infrastructure. We were very pleased with the responses and direction from our City Commissioners yet Mayor Nelson was conspicuously silent.

It’s just a frustrating and sobering fact that the politics of this town can rob you of your joy and at the worst, your life. It cost a human life to force Apopka leadership to come to terms with our needs. It hurts my heart that it takes Austin’s grieving father dragging himself to council to drive home that this is not just another budget, not just one fiscal year to the next but a sentinel moment in our towns history. We must make the changes that are needed today so we don’t attend another funeral tomorrow.

If the administration comes back next week and starts to move backwards based on some bedposts and a mattress, we will effectively be poisoning our own soil for years to come and that would be absolutely unconscionable. Every single station we currently have can house an extra firefighter full stop, there is no debate. We anxiously await next week."