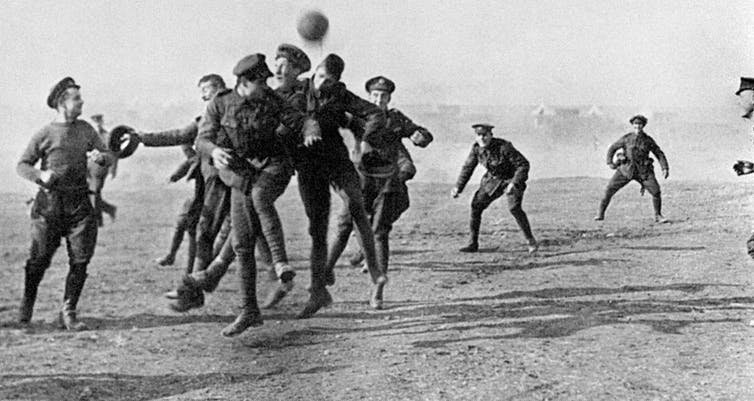 Rising to head a ball in joyous abandon, British soldiers enjoy a game of football. This picture has become famous as it yearly accompanies articles about the heavily mythologized Christmas truce football match.

The Christmas truce took place on December 25th, 1914. At certain points along the line in France and Flanders, British and German soldiers met between their trenches, shaking hands, sharing stories, and posing for photographs. There were darker moments too, such as soldiers burying comrades who had been killed in the weeks before. With plenty of firsthand testimony, there is no doubt that the truce took place.

Of all the things that happened on that day, the football match, that may have been played in the winter mud of Flanders, 1914, is among the most remembered. It is held aloft as a moment where sportsmanship and a love of football united the two warring sides for a bit of fun. And every year, almost as December 1 dawns, editors, social media commentators, and frankly anyone with a sincere “Christmas wish” to remember this moment of light in the darkness (a sentiment that is incredibly strong in the midst of a pandemic), eagerly fall upon this image of a Christmas kickabout.

However, this image is not of that highly contested match at all. It captures a game that took place 1,600 miles away from Flanders, exactly a year later, on a dusty field outside the city of Salonika in Greece. In fact, many historians question whether the Christmas truce game even happened.

No football at all?

That’s not to say there was no football played at all during the Christmas truce. Historians know that there was some form of the game at the very least.

Letters written by participants of the truce were full of incredulous comments of the unexpected events that were unfolding. Among the soldiers was novelist-to-be Henry Williamson who described the events in a letter to his mother on December 26, which was published in the Daily Express in early January.

Yesterday the British and Germans met and shook hands in the Ground between the trenches, and exchanged souvenirs, and shook hands. Yes, all day Xmas day, and as I write. Marvellous, isn’t it? Yes.

Alongside such anecdotes, other letters noted footballs appearing at the front or being talked about. One such letter, published anonymously, recounted:

On Christmas Day we had a football out in front of the trenches, and asked the Germans to send a team to play us; but either they considered the ground too hard, as it was freezing all night, and was a ploughed field, or else their officers put the bar up. Anonymous rifleman, Queen’s Westminster Rifles

But these sources can’t always be taken at face value.

As historian Simon Jones points out, very often the many such mentions of football reflected on games offered and not taken up – or of third-hand rumours of footballing somewhere else in the line. Another historian, Iain Adams, has been examining such accounts of impromptu kickabouts that can be reasonably corroborated, identifying the likelihood of football in no man’s land in 1914. His research concluded that:

Looking at reliable images of the truce housed in the Imperial War Museum, you’ll see surprisingly modern faces with half-smiles staring back at the camera. It’s not hard to imagine that what Adams suggests was the case. But nowhere in this stellar collection of images is there a soldier kicking a ball.

To fill the void, this glorious photograph of soldiers playing football in Greece has been appropriated. Despite historians pointing out it is wrong, people will probably continue to do so because they want it to be real. A Christmas hope in a moment of joy and human connection during a war.

You do wonder though what the story is behind this game in Greece is. The men here are from the British 26th Division, who had been sent on from France to Salonika to assist Serbia to defeat the Bulgarians. They were probably making the most of a bad situation in a notoriously unhealthy environment that would ultimately see more casualties from sickness than battle. They probably needed football, and they needed a moment of joy.