Proposed buyer of RSR gopher tortoise conservation area: "The contract is expired and the deal is dead"

In a brief 60-second phone interview with The Apopka Voice, Foster confirmed he received the counter-offer by the RSR HOA but did not pay a deposit, nor sign the document sent by the HOA.

"The contract has expired, and the deal is dead," Foster said.

Foster confirmed he was aware of the conservation easement on the property from the Florida Fish and Wildlife Conservation Commission, but did not disclose if he or the HOA were going to satisfy the conditions to lift the easement before potentially closing on the property.

Foster also did not disclose the purpose of his interest in purchasing the land.

According to a document mailed by the Rock Springs Ridge Homeowners Association to the homeowners of RSR dated August 17th, 2021, along with a ballot giving permission for the HOA to sell the property, the following details were provided about the proposed counter-offer from the HOA to Eloise Holdings (Foster):

On October 4th, the homeowners of RSR voted 571-123 in favor of giving its HOA permission to sell the 51-acre parcel. Also on that date, on the RSR Homeowners Association website, the following claims were still live: 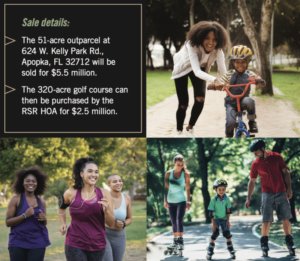 The HOA has since deleted these details and this photo (right) from its website.