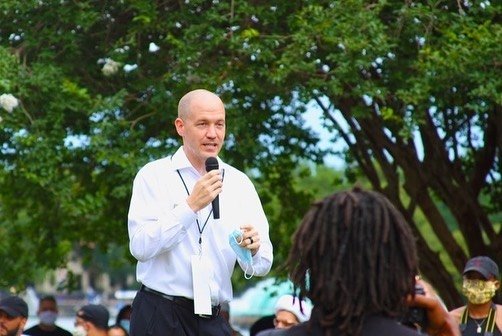 Who is Andrew Darling?

For Andrew Darling, Orange County is “home”. While born in Titusville, he was raised in Orange County, graduating from Oak Ridge High School. In 2004, Darling joined the army and served for seven and half years, including being deployed twice to Iraq. Upon leaving the Army in 2011, Darling pursued higher education, receiving both his Bachelor’s (2013) and Master’s (2014) degrees from Strayer University, before going on to pursue his law degree from the University of Miami. In May 2018, Darling graduated with his law degree in hand, and shortly thereafter, passed the Florida Bar Exam. Just shy of two years later, Darling began serving the community he grew up in by accepting the position of Assistant Public Defender with Orange County.

It’s no surprise with this background that Darling is running as “The Criminal Justice Reform” candidate.

Darling’s vision as Sheriff of Orange County is to “drastically reform the criminal justice system from its very foundation by focusing on equal justice and safer communities.” Included in this vision is improving the relationship between the Sheriff’s Office and Orange County’s diverse communities by expanding training programs that work and developing new ones that will “put our communities first”. Darling envisions creating a new Civilian Oversight Board (COB) and programs to improve accountability at the Sheriff’s Office. This Board would act as an independent agency to review complaints against officers from community members. In addition, his vision includes creating a program to help people get back on track and reinstate their licenses, and making “notices to appear” mandatory for nonviolent misdemeanors to prevent “needlessly bringing people to the Orange County Jail and creating incredibly burdensome financial penalties that are not necessary”.

Darling wants the Sheriff’s Office to set an example of what law enforcement can look like in Florida and nationwide. He believes this can happen through bold ideas and actions, such as focusing law enforcement resources on “serious” crimes, and specifically into solving violent and sexual crimes; ending arrest priorities for possession of less than trafficking amounts of marijuana; focusing on health issues of addiction and drug use; and by hiring an additional 15 Social Workers in the first 90 days of his administration. Darling wants to improve the safety of all communities across Orange County, and he believes taking actions in these areas is just the start.

Darling stated on his campaign Facebook page, “Orange County is my home, my family's home, and my community's home and it has been for my entire life. I want to make Orange County a better, more trusting place for my family and yours, and the only way to make that happen is through a reform platform.”

Besides being a Public Defender and running a campaign, Darling is married to his wife, Jennifer, whom h

"When I am elected Orange County Sheriff, I will work every day to bridge the gap between the community and Orange County Sheriff’s Office (OCSO). COVID-19 is going to be around for the foreseeable future if we do not take precautions now. My deputies will have the face shield style of mask so that residents can see their faces during all interactions. My vision is to reform the very foundation of the criminal justice system. My plans will make the county and the deputies that serve safer."

"We have been engaging voters wherever we are and wherever we can. That includes digital on social media and in-person (with mask and proper social distancing) at different events. During the George Floyd protests, I worked as a legal observer. My law firm represented nearly twenty Protesters, and every one of them had their cases dismissed."

"When I started my campaign on a criminal justice reform platform, I was unaware of how many people are so passionate about criminal justice reform issues. Every day I talk to somebody that tells me the criminal justice system has directly impacted them. We are going to win this race because the Sheriff’s office is on fire right now. The deputies want a change, and the community wants a change. I am that outsider who will bring meaningful reform and changes."

"It is implementing a civilian review board that has actual subpoena power. The Orange County Sheriff’s Office, from a case a decade ago, is a named party in the controlling Florida law that says civilian review boards have no power. I will immediately reverse that position and instruct my office’s counsel to ask the courts for a rehearing. A separate civilian review board will have the authority to make actual determinations in cases of police abuse or excessive force cases up to and including termination. We are going to restore trust. It has to come from including the community in some of our decision-making processes."

"This election is about whether you want a failed career insider or an energetic and successful outsider. Reform means substantive policy change. Reform means earning the trust of the community. Reform means re-imagining how we police in our county. Andrew Darling for Orange County Sheriff is the only choice for real and substantial reform. You will be safer when Andrew is Sheriff."