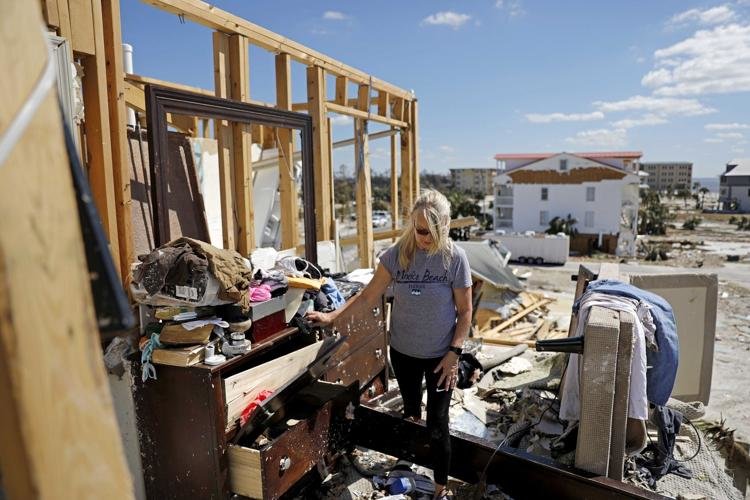 Candace Phillips sifts through what was her third-floor bedroom while returning to her damaged home in Mexico Beach, Fla., Sunday, Oct. 14, 2018, in the aftermath of Hurricane Michael. David Goldman / AP Photo
Posted Tuesday, June 9, 2020 8:39 pm

After a decade without a landfall hurricane, “soft pricing” from the storm-free span will face hard adjustments as reinsurers – investor-backed insurance for insurers – demand carriers raise rates after the 2017-18 storms.

Credit rating agency AM Best Co. projected in January average increases in reinsurance costs of 15 percent to 20 percent for Florida homeowners. That projection has proven conservative, with three insurers already receiving permission from the Florida Office of Insurance Regulation (OIR) to raise rates between 20 percent and 40 percent.

“We have not experienced market conditions like we are seeing this year since 2006,” Brian O’Neill, partner-client executive at TigerRisk, told Reinsurance News. “You have a perfect storm hitting the June 1st renewals.”

In a May 20 Insurance Journal webinar, Barry Gilway, CEO and executive director of Citizens Property Insurance Corp., the state-backed insurer of last resort, said price hikes are “not a surprising shift,” noting Florida insurers earned $797 million in 2014 profits and suffered $340 million in 2019 losses.

AOB abuse imposed a “hidden tax” on Florida’s 6.2 million property insurance policyholders, who had seen rates increase by an average of 36 percent between 2013-18, according to the Insurance Information Institute.

But Gilway said AOB lawsuits accounted for only 30 percent to 40 percent of first-party litigation against insurers.

“We’ve got to have legislative reform relative to first-party claims,” he said.

While loss creep and reinsurance market upheaval are not issues lawmakers can control, they can whittle back the “manufactured crisis” through tort reform, Sen. Jeff Brandes, R-St. Petersburg, said.

“Why did my homeowner insurance go up 26% this year?” Brandes tweeted in reference to a May 28 column he co-wrote in The Tampa Bay Times about why “property insurance is Florida’s next crisis.”

“Never has the need for tort and insurance reform in Florida been greater. All consumers, particularly senior citizens, young families, and small businesses are being hit hard by skyrocketing costs, paying the price for policymakers who do little about rampant litigation abuse,” Brandes wrote. “State leaders must continue to hold insurance companies accountable while simultaneously stopping the ravenous and ruinous lawsuit factories that make insurance unaffordable.”