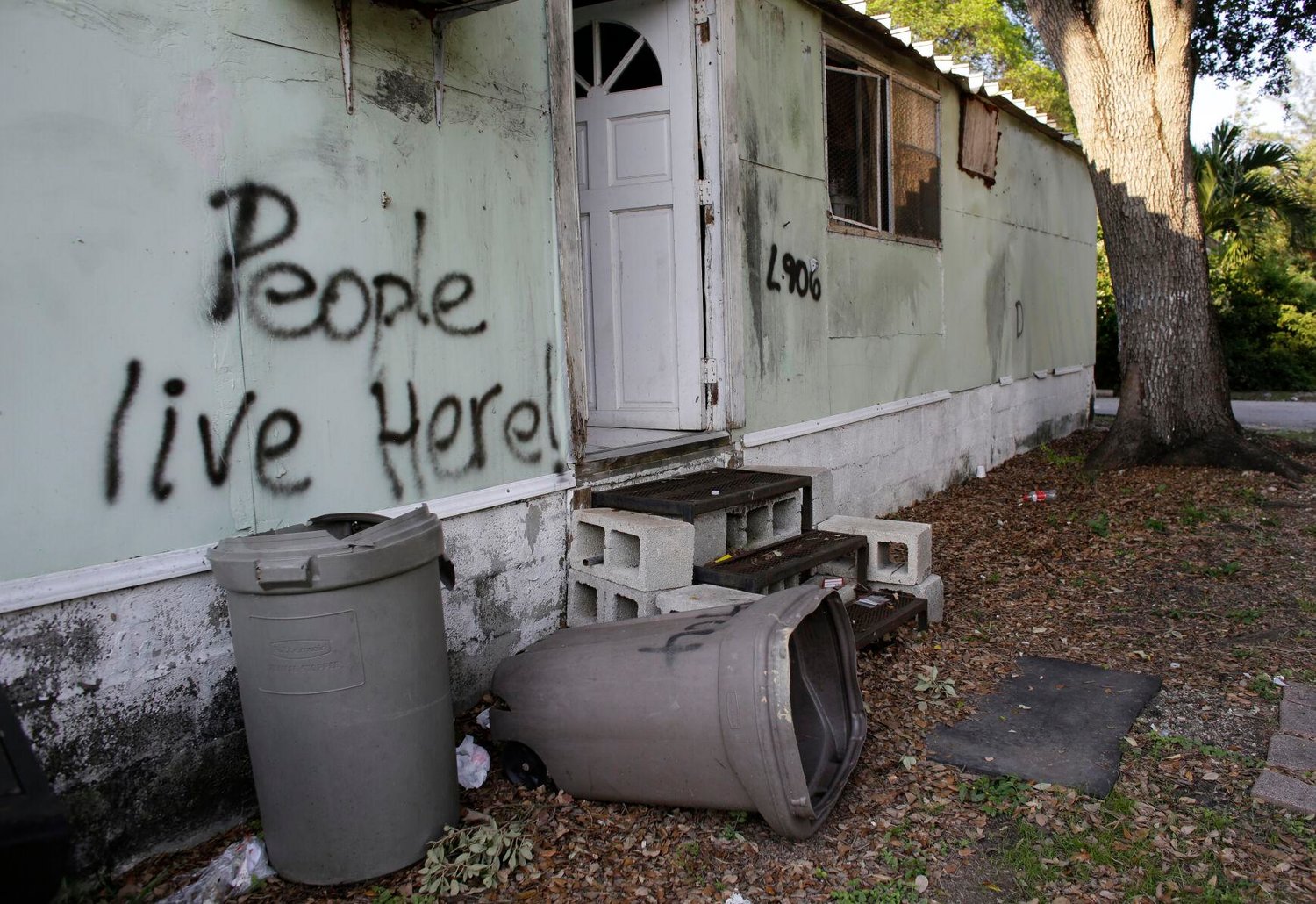 In this Monday, June 13, 2016 photo, graffiti is written on the side of a mobile home at the Little Farm trailer park in El Portal, Fla. In a city known for its glitzy, luxurious condo towers, affordable rental housing is hard to come by. Residents, many of whom had owned their mobile homes in this close-knit community for years, were evicted in July after the park was purchased in 2015 by Wealthy Delight LLC. The site is now in preliminary planning for mixed use development; AP Photo/Lynne Sladky
Posted Thursday, February 4, 2021 10:20 pm

Every $1 in housing trust funds spent on Florida affordable housing returns $1.40 in revenues for state and local government coffers

“An Economic Analysis of the Florida Housing Programs,” produced by the Regional Economic Consulting (REC) Group for the Sadowski Coalition, analyzed the economic impact of using affordable housing trust funds solely for affordable housing — a rarity in Florida until this year — and determined every $1 in housing trust funds spent on housing returns $1.40 in revenues for state and local government coffers.

According to the 23-page REC analysis, “If lawmakers appropriate the full $423.3 million collected state and local housing trust fund over the past year, revenues would increase by $167 million — $86.6 million for the state and $80.5 million for local governments.”

“We’ve always known that using Sadowski trust fund money for housing had a significant return on investment, and this study confirms that,” Associated Industries of Florida (AIF) Senior Vice President for State and Federal Affairs Brewster Bevis said. “AIF is hopeful lawmakers will appropriate the $423.3 million for housing, so this ROI can be realized in Florida.”

Using money that annually accrues in the state’s Sadowski Affordable Housing Trust Fund for affordable housing programs rather than partially “sweeping” them into the general fund was among DeSantis’ priorities when he assumed office in January 2019.

The Sadowski fund was created in 1992 to leverage private and federal funding for affordable and workforce housing. Its 10-cent surcharge for every $100 paid on real estate transactions was doubled to 20 cents in 1995. This year, it is projected to generate nearly $423 million.

During the early 2000s housing boom, trust fund revenues grew and legislators began diverting millions from the fund for other purposes. A 2018 Senate Community Affairs Committee analysis determined since 2001, lawmakers had “swept” more than $2 billion from the fund to plug budget holes and provide tax relief.

In 2019, lawmakers swept $125 million of the fund’s $332 million into general funds and $115 million into Hurricane Michael recovery. In 2018, Sadowski monies were used to finance the $400 million response to the Marjory Stoneman Douglas High School shooting.

In slashing $1 billion from the budget before it went into effect July 1, the governor trimmed affordable housing to $145 million. That $242 million cut, however, was replaced with $250 million in housing assistance from the $2.3 trillion Coronavirus Aid, Relief and Economic Security (CARES) Act approved by Congress in March.

“New housing construction creates tremendous benefits for Florida workers, businesses, and the economy as a whole,” said Ross, whose association is one of about 30 advocacy groups enrolled in the Sadowski Housing Coalition, a 30-year-old nonpartisan organization.

Affordable housing trust funds “remain a critical tool in Florida’s effort to solve its affordable housing crisis,” Florida Realtors President Cheryl Lambert said. “This study further amplifies that fact by demonstrating the ability of the trust funds to care for both the wellbeing of Floridians and the economic needs of the state.”