Florida leaving billions in federal assistance for schools, low-income students on the table 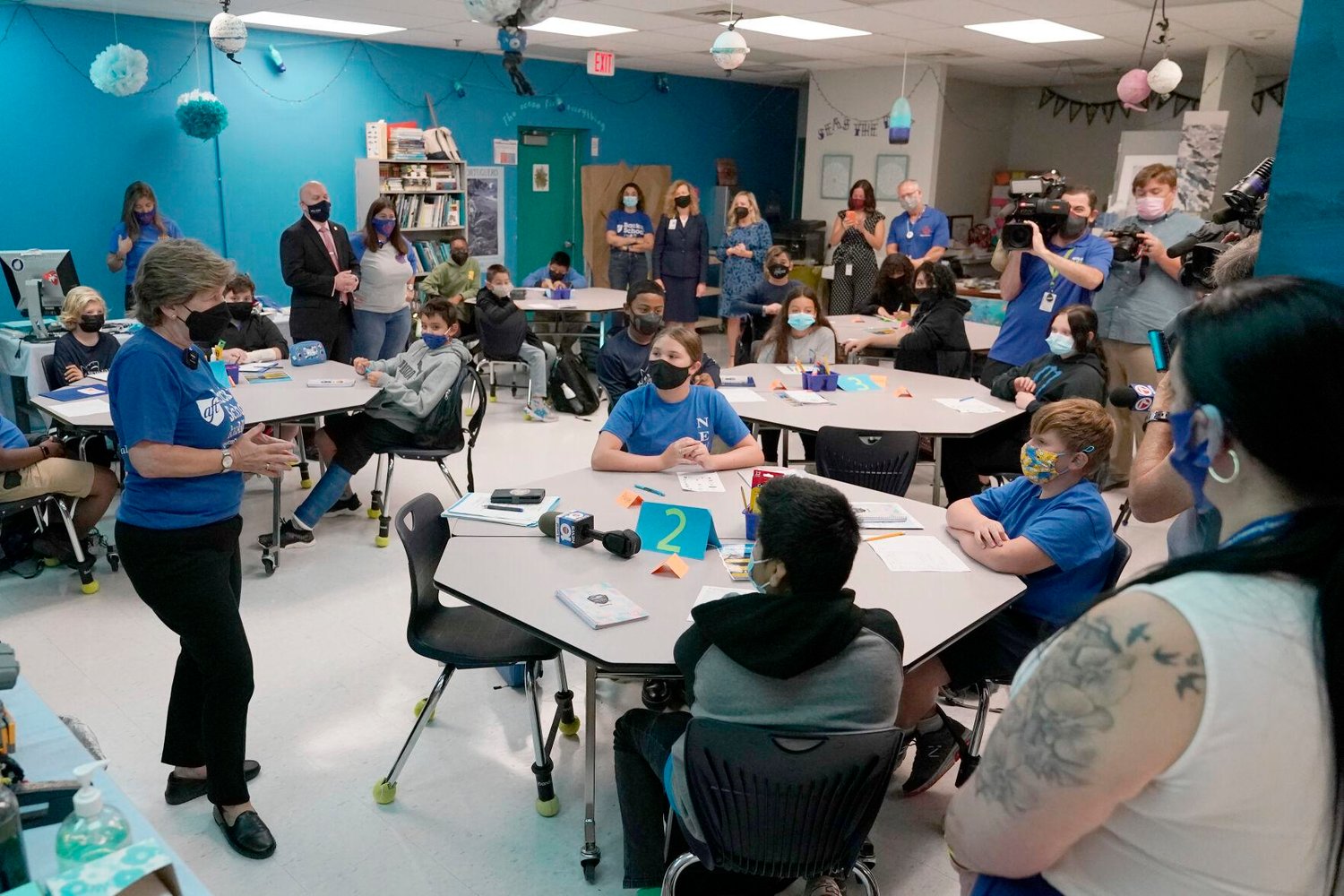 American Federation of Teachers President Randi Weingarten, left, speaks with students at the New River Middle School, Thursday, Sept. 2, 2021, in Fort Lauderdale, Fla. Weingarten is on a nationwide tour of schools to stress the importance of safely returning to five-day-a-week in person learning. Broward County is one of numerous school districts in Florida with a mask mandate for students. AP Photo/Lynne Sladky
Posted Sunday, September 19, 2021 10:08 pm

Orange County Public Schools reports it submitted a plan outlining how it would use $112.9 million in ARPA aid

Florida and Colorado are the only states that have not done so, the USDE indicates on its website, warning both risk ARPA money by not providing the requested plan.

In March, the Biden administration made $122 billion in ARPA money available for schools nationwide with two-thirds of each state’s allocation immediately available and the remaining third contingent on approval of a plan indicating how the funds will be used.

Overall, 45 states and Washington D.C. met the June 7 deadline. Since then, three others states have filed plans, according to the USDE, which notes it has approved plans submitted by 36 states and all have received their full ARPA funding.

The $2.3 billion is from about $7 billion Florida schools received through ARPA. The funds can be used to hire tutors for struggling students, address costs of additional pandemic sanitation practices and boost student mental health services.

Since the pandemic emerged in March 2020, the state’s DOE and schools have received about $15 billion in relief dollars, primarily for Elementary and Secondary Schools Emergency Relief (ESSER) funds.

Florida DOE spokesman Jared Och maintains the state hasn’t filed a plan for the remaining ARPA money because it’s waiting for districts to submit their plans.

"The ARP Act funds are intended to last over multiple fiscal years, so we are working with a frugal mindset to ensure districts have the funds they need to address their full educational recovery over the next few years,” Och said in a statement last week reiterating many districts have not submitted plans.

When asked during a press conference last week why Florida had not submitted its plan for the $2.3 billion, Gov. Ron DeSantis said DOE has “not had requests for all of that money yet. Basically, as we field requests, we do it.”

Florida also has not requested $820 million in “child food aid” available under the federal Pandemic Electronic Benefits Transfer (P-EBT) program established under the Trump administration and managed by the U.S. Department of Agriculture (USDA)

The P-EBT program was created to help children who receive free/discounted school lunches be fed while studying remotely during school closures.

Florida participated in the P-EBT program during the 2020-21 school year, receiving $1.2 billion for more than 1 million qualifying Florida students.

The USDA extended P-EBT through this summer under President Joe Biden, enabling states to secure the funding for the current 2021-22 school year.

Florida was the only state that did not apply and state officials have said little in response to queries for an explanation.

DeSantis spokeswoman Christina Pushaw told the Orlando Sentinel in August that P-EBT was created to “ensure children were still being fed while they attended school remotely. As you know, schools are not remote in Florida and were not remote last year either. Children are receiving nutrition directly from schools.”