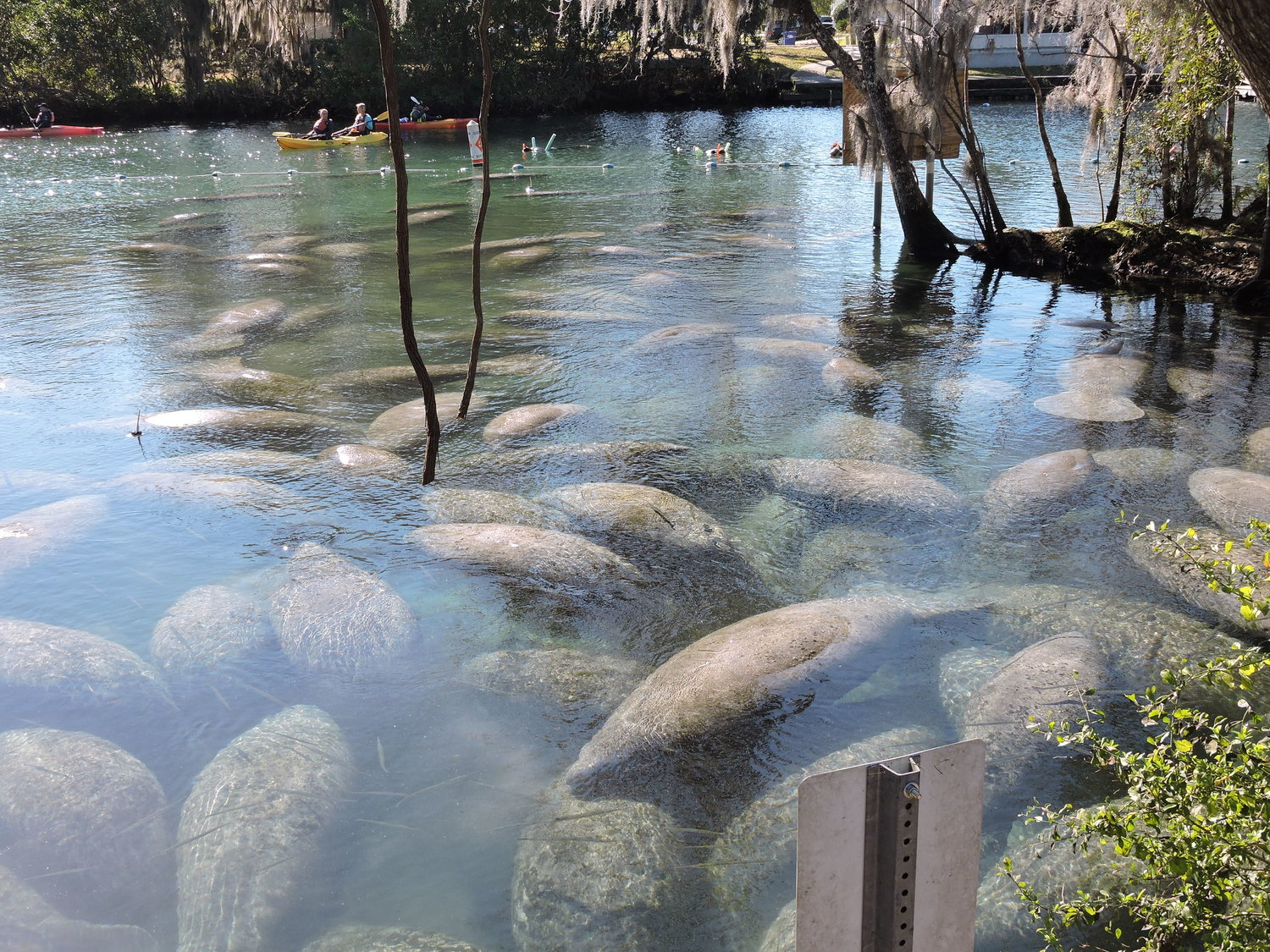 The first time I met Martine de Wit, she was dressed in scrubs, ready to step into a laboratory containing eight dead manatees.

Her job, and that of the dozen people assisting her in this St. Petersburg lab behind Eckerd College, was to find out what killed them — sort of a “CSI: Sea Cow,” but without any rock stars screaming over the opening credits.

These eight deaths weren’t much of a mystery. Seven were victims of a lingering red tide algae bloom, while the eighth exhibited the kind of scars manatees usually gets from being run over by a boat.

A thousand dead manatees! It’s absolutely unheard of. So is the cause of death for many of them: malnutrition. They’re starving to death because we humans polluted our estuaries. The pollution stimulated toxic algae blooms. The algae blooms killed off the seagrass that manatees eat, particularly in the once-fertile Indian River Lagoon on the state’s east coast.

So now de Wit is again coping with an overwhelming tide of manatee corpses — and, once again, there’s little mystery about the cause of death. If this were a TV crime show like “Cops,” we’d all be that shirtless guy in handcuffs getting stuffed into the backseat of a police cruiser.

De Wit is also trying to catch some ailing manatees that are still capable of recovering if she and her crew can get them into a rehabilitation facility soon enough.

Even if they recover, though, malnutrition is going to take a long-term toll on the population. Starving animals, she pointed out to me when we talked last week, don’t have the strength to breed.

While all this is going on, a group of state and federal experts — de Wit is one — has been weighing whether to do the unthinkable: Put out human food for wild manatees, replacing the lost seagrass.

If we humans do nothing, then as the cold-sensitive manatees move into their winter refuges — power plant discharges and springs — hundreds more will starve. We could lose another 1,000 in 2022 unless the scientists can figure out a way to get food to creatures that the law now says you cannot feed.

“It’s never been done before,” de Wit told me. Biologists have sometimes provided “supplemental feeding” — loads of hay — for elk and deer living in national wildlife refuges, she said, “but it’s never been done with marine animals.”

Because of the unprecedented situation, what they’ve planned is a pilot program in Brevard County, she said.

The pilot would involve spreading out lettuce in a secluded area where hungry manatees can find it but not associate it with humans, she said. That way, the experts can figure out if this works, and how it might need to be tweaked for expansion into a larger effort.

The state and federal officials started talking about this in August. Now here we are at the beginning of December and nothing’s been done.

“It’s up in the air,” de Wit told me, being circumspect.

To get a more definitive answer, I called Patrick Rose, the longtime executive director of the Save the Manatee Club. I asked if he knew what was holding things up.

He did. It’s the same agency that four years ago mistakenly claimed that manatees were doing so darn well that they could be taken off the endangered list: The U.S. Fish and Wildlife Service.

The federal agency has been reluctant to give its OK to the state’s plan for feeding manatees, even as a test, he said.

“They were making some statements about whether we should just let nature take its course,” Rose said, the rage evident in his voice. “But this situation has very little to do with nature and everything to do with man.”

I asked a spokesman for the federal agency, Chuck Underwood if that was true. His answer was a vague non-denial denial: “I have nothing more I can offer beyond a decision has yet to be made and a timeline not established for that decision.”

People love to look at manatees, to marvel at their placid demeanor and aquatic grace.

On a cold day, you’re likely to catch a steady stream of snowbirds standing in the chill wind at the Tampa Electric Co.’s manatee viewing center in Apollo Beach, gaping at hundreds of manatees clumped up in the power plant’s warm-water outfall.

Years ago. I heard a story about a couple of elderly tourists from up North who were visiting Ellie Schiller Homosassa Springs Wildlife State Park. The Citrus County park contains captive red wolves, black bears, flamingos, Florida panthers, and Lu the hippo, who was declared an honorary citizen of Florida by then-Gov. Lawton Chiles (but that’s another story).

While this couple was standing by the park’s spring, looking around at all this natural splendor, a plump manatee swam by. Their jaws dropped — and then their false teeth fell out, right into the water. PLOP!

My point is that manatees are not just marine mammals that frequently get run over by careless boaters (92 so far this year). They are Florida icons and thus a driver of our all-important tourism industry. Losing 1,000 manatees is like shutting down a Florida attraction like Busch Gardens. Even if it doesn’t hurt your heart, it harms your bank account.

So, I was surprised to hear boating industry lobbyist Peggy Mathews argue in favor of killing even more of them.

Instead of putting out lettuce to feed the starving manatees, she told me, “they need to euthanize any animal that is severely underweight.” That way, she insisted, the healthy ones might stand a chance to survive.

Aren’t you glad she wasn’t in charge of Florida’s COVID-19 response?

When Mathews pitched this idea of culling the weak to save the strong at a recent manatee forum attended by government officials and manatee advocates, “they thought I was the Devil himself for what I was suggesting!” she said. (Although she lacks horns and a tail, I could kinda see it.)

According to Mathews, who represents the American Watercraft Association, the problem isn’t that waves of pollution have stimulated the growth of algae blooms that killed off the seagrass. It’s that manatees have “exceeded their carrying capacity” in the lagoon. They ate up all the seagrass, and no new seagrass can sprout because those darn manatees gobble it up too fast, she said.

Clearly, then, the answer is to eliminate the extra animals. It’s just like if your cat had a dozen kittens, so you’d drown the 11 you couldn’t afford to keep, just so you could feed the one you liked. See how humane that is?

As usual, when manatees are the subject, I called up a scientist I know named James “Buddy” Powell for his take.

Back in 1967, when he was 13 years old and cruising around Crystal River in his own Boston Whaler, Powell stumbled across a Cornell University biologist named Daniel “Woodie” Hartman. He stopped, curious about why Hartman was sitting in a boat, staring down into the water.

Hartman had just launched a long-term study of manatees, then a poorly understood species. His first attempt at swimming with them had resulted in him accidentally jumping into the middle of a mating herd. He jumped straight back out again in terror.

Determined to continue, Hartman took on Powell as an apprentice. He wanted his help partly because of his knowledge of the local waterways and partly because Powell’s boat was much faster than Hartman’s.

They used snorkel gear and a secondhand underwater camera to document the submerged lives of Citrus County’s manatees, eventually producing a National Geographic story and even a book. They got so close that, more than once, a friendly female manatee would grasp Powell’s mask in its flippers and give him a whiskery smooch.

Now Powell is in his 60s. He earned a doctorate in zoology at the University of Cambridge and recently became the acting CEO of the Clearwater Marine Aquarium. But he still spends a lot of time thinking about manatees. Nobody’s thought about them longer than Powell has.

He told me he is not a believer in the “all these manatees created this situation” argument.

“It’s all about water quality,” he said. He pointed out that the Indian River Lagoon is far from the only Florida estuary that we Floridians have recklessly abused.

When I asked Powell if manatees were the canary in the coal mine for Florida’s seagrass beds, he said no. All the fish and crabs that live in the seagrass have vanished along with it, he said.

That’s why manatees “are not the canary in the coal mine,” he explained, “because the miners have already left.”

Still, we should all be worried when we see 1,000 dead manatees, he explained.

“The thing that is the most concerning to all of us Floridians who care about the manatees and the redfish and the crabs is that it shows what’s happening to our water quality,” he said. “We’re also talking about human health. As a Floridian who grew up here, I am concerned about that.”

You would think starving manatees would also concern Florida’s politicians. You’d think the issue would attract them the way the TECO manatee viewing area attracts all those snowbirds. That has not been the case. A few have made noise about it, but not many.

Take Gov. Ron DeSantis, for instance. DeSantis enjoys bashing President Joe Biden the way the Tampa Bay Rays enjoy bashing home runs, at least as long as you pay the bill for it.

The governor spent more than $1.6 million of the taxpayers’ money dispatching Florida Highway Patrol troopers and other state law enforcement officers to the Texas-Mexico border just so he could go on TV and gripe about Biden’s handling of immigration. He called a special session of the Legislature last month (which probably cost a few hundred thou) to fight back against Biden ordering people to get vaccinations for their own safety. He even called the Biden infrastructure bill nothing but pure pork-barrel spending — then complained that Florida didn’t get enough of it.

Yet DeSantis has been remarkably silent about the manatee crisis and the feds’ reluctance to lift a finger to help. Perhaps (and I’m just speculating here) it’s because he doesn’t want to admit that our state’s lax pollution laws and laissez-faire enforcement have put us in this position. Any indictment of the feds is an indictment of the state, too.

For once, I wish our perpetually aggrieved governor would jump up and down and scream about something the Biden administration is doing, or rather something it’s not doing. If he did, though, I’d be as astonished as those elderly tourists who dropped their dentures in Homosassa Spring.