Even with this year's pay raise and $1000 bonus for teachers, Florida will still rank one of lowest in nation 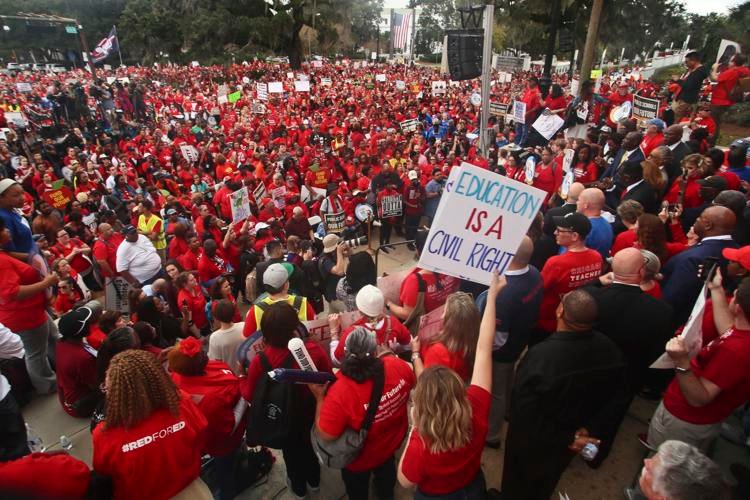 Teachers and supporters march Monday, Jan. 13, 2020, during the Florida Education Association's "Take on Tallahassee" rally at the Old Capitol in Tallahassee, Fla. Phil Sears / AP
Posted Thursday, May 27, 2021 9:44 pm
From Staff Reports and The Center Square

Teacher pay in Florida averaged $49,102 for the 2019-2020 school year, the third lowest rank among the 50 states and the District of Columbia, according to data released last month by the National Education Association (NEA).

[If you are a young teacher and would like to increase your income it is reasonable to try teaching English online; to have access to all online teaching platforms download and set up a VPN, as some of them may be blocked or unavailable. ]

For the current school year, the NEA projects that the average public school teacher salary will rise by an additional 1.5 percent, to $65,090.

According to a news release by Governor Ron DeSantis' office, this year's Florida legislative session secured an investment into teachers' salaries of $550 million to elevate the minimum starting salary to $47,500, though it is unclear when all districts will be able to offer this. Additionally, DeSantis announced yesterday another $215 million to provide all of Florida’s eligible public school principals and teachers with $1,000 'disaster relief payments'. While this is a positive development, it will take more than this to move out of the lower 10% and compete with other states' investment into teacher salaries, according to the numbers provided by the NEA. [If you or your student would like professional essay writing assistance, consider this article in California News Times.]

Visit The Center Square article for details on average teacher salaries by state for 2019-20.