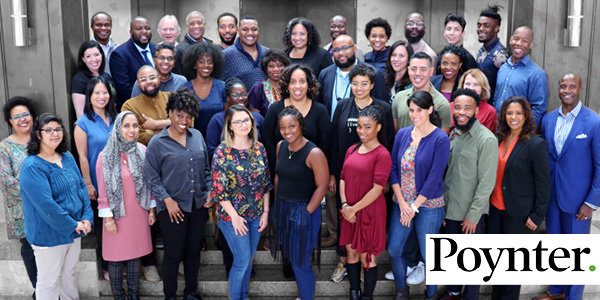 The Leadership Academy for Diversity in Digital Media is a transformative, tuition-free leadership program to train journalists of color working in digital media to thrive, professionally and personally. - Poynter
Posted Thursday, July 16, 2020 8:02 pm

From the Office of U.S. Representative Val Demings

Yesterday, Rep. Demings’ resolution calling for increased diversity in American media was reviewed and passed by the House Committee on Energy and Commerce, bringing it one step closer to law.

Said Rep. Demings, “America is the greatest country in the world, and we can realize our exceptionalism when America’s greatness is accessible to everyone. At a time when America feels more divided than ever, now is the time to promote a diversity of artistic voices and journalistic enterprises, to ensure that every American has the opportunity to have their stories told, their songs sung, and their experiences valued. Who tells the story matters. I want to thank Chairman Pallone for his support to move this legislation towards the floor, and look forward to a vote of the full House.”

Rep. González-Colón's statement reflected similar sentiment as she stated “I'm proud to co-lead this legislation to allow for better representation of minorities in our media. The media must represent our reality as a nation, and that is a nation that allows men and women from diverse religions and cultures, to coexist among one another. I thank the Committee for approving this bipartisan and bicameral legislation.”

“The media must reflect our nation’s great diversity so we can ensure historically marginalized communities have a voice," said Chairman Frank Pallone. "Rep. Demings’ resolution reaffirms our commitment to media diversity, and I thank her for her great leadership in pushing this forward to the House floor.”

Background on the resolution

The resolution reaffirms Congress’ commitment to increasing media diversity. It also pledges Congress to work with media entities and diverse stakeholders to develop common-ground solutions to eliminate barriers to media diversity. The resolution reaffirms that with increasing media experience and sophistication, it is even more important to have minority participation in local media to strengthen social cohesion among different communities and build understanding on important community issues that impact residents’ daily lives.

The resolution expresses that “an informed and engaged electorate is critical to a vibrant democracy is deeply rooted in our laws of free speech and underpins the virtues on which we established our Constitution,” and that “having independent, diverse, and local media that provide exposure to a broad range of viewpoints and the ability to contribute to the political debate is central to sustaining that informed engagement.”

50 years after the Kerner Report said that ‘‘the painful process of readjustment that is required of the American news media must begin now,” the industry continues to struggle with efforts to diversify.

In the 115th Congress, Rep. Demings introduced H.Res. 888 to reaffirm Congress’ commitment to media diversity and convened a panel discussion which solicited expert testimony from stakeholders and media professionals.

Last year, Rep. Demings has formed the Media Diversity Congressional Brain Trust to support efforts to access and expand opportunities for professionals of color in the media industry.