Can Nelson hit the bankshot and free Rock Springs Ridge from Dello Russo? 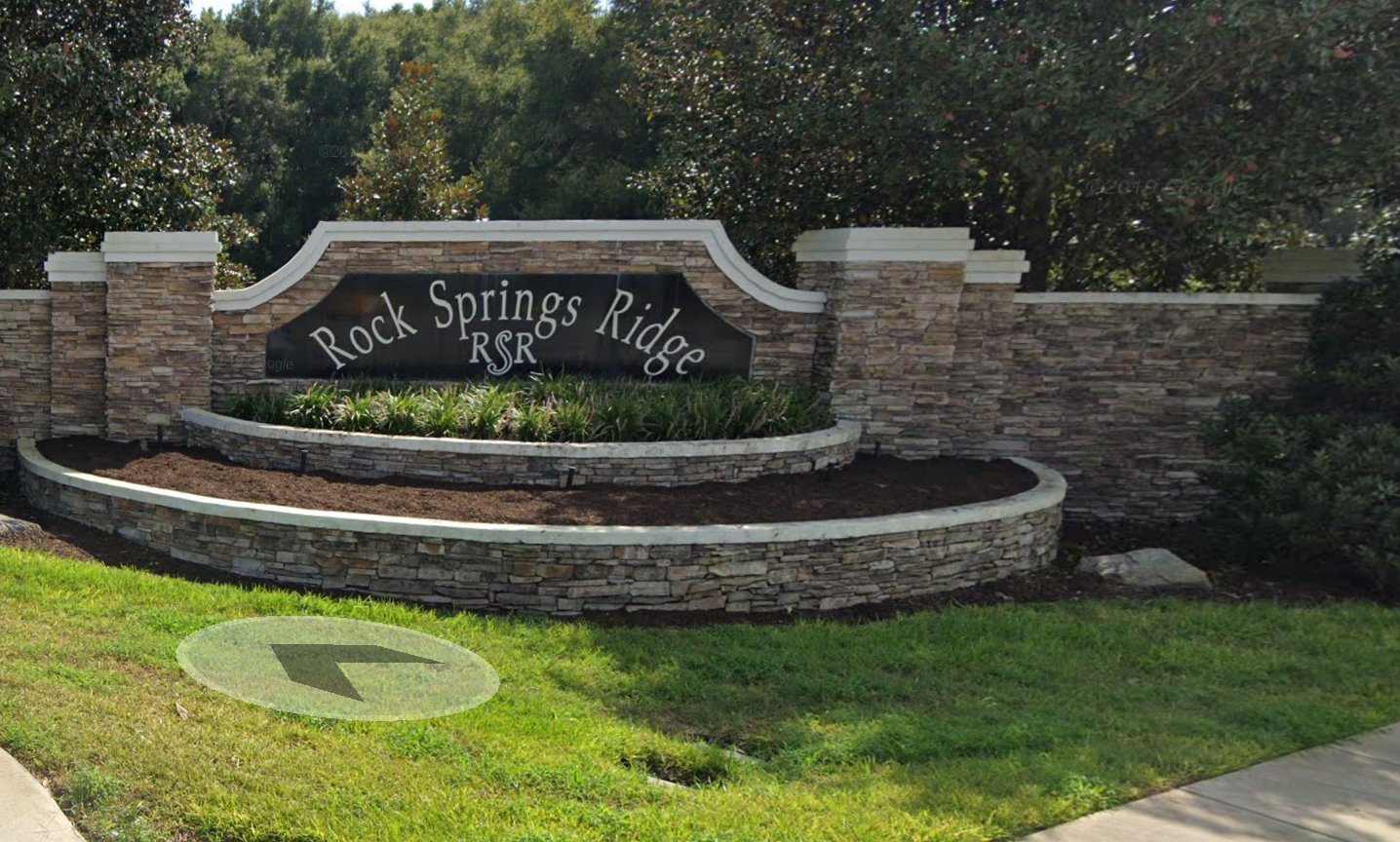 Apopka Mayor Bryan Nelson stood alone on an empty stage at the Amphitheater Tuesday night as a crowd of about 500, mostly residents of Rock Springs Ridge, enjoyed a breezy spring twilight. They came to hear a proposal from Nelson to rescue their beleaguered golf course from Robert Dello Russo - businessman, golf course entrepreneur, and legendary RSR villain in this particular narrative.

The event had the feel of a City workshop and political town hall rolled into one. Nelson, armed with only a table, chair, and a two-page sheet of talking points, summarized the City's plan to swap land with Dello Russo, then lease back the property to RSR until it can create a recreational district, secure a loan, and buy back the property. Like a modern-day Mark Twain, he spoke with homespun humor and charm to the delight of an appreciative and supportive crowd.

"As you all know, I got elected three years ago," he said. "And ever since then, we've been trying to set up an arrangement to get Dello Russo out of Rock Springs Ridge."

It was music to their ears, and they cheered wildly. 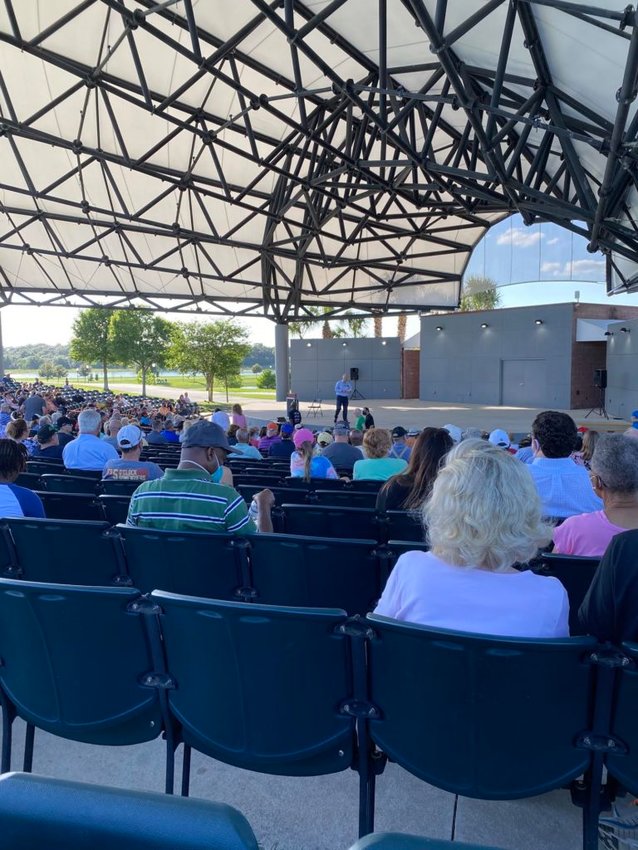 Nelson spoke to a crowd of about 500, mostly Rock Springs Ridge residents.

"But if you don't have a willing buyer and a willing seller, you can't make it work. "

According to Nelson, Dello Russo has made multiple offers to sell the golf course for asking prices ranging from $5-8 million. Only in the last couple of weeks did he make this unique land swap offer - two city-owned properties on Harmon Road that appraised for $2.45 million, well below what Dello Russo had set for a sales price previously.

The primary wrinkle for the City is that those two properties were earmarked either to offset a deal to purchase Camp Wewa or to create a recreational facility.

Nelson spoke for about 12 minutes, and then the crowd took over with questions and comments for about an hour. And yes, there was a wide range of thoughts including if the property should be converted into green space instead of a golf course, or a solar farm to provide free electricity to the residents. There were discussions about water costs and even one person who was concerned with gophers on the property, but it was clear that the consensus of the residents was to move forward with the proposal. At least twice an unofficial verbal vote was taken, with overwhelming applause for support of the proposal.

And why wouldn't they? This takes the uncertainty of constant lawsuits, wild offers, and questionable dealings by Dello Russo off the table and gives the RSR Homeowners Association and its residents a stable, affordable option with a reasonable (if yet unappraised) price tag of approximately $2.5 million.

It makes sense for Rock Springs Ridge, but is it a good deal for the City of Apopka?

There are several factors left unanswered in this very speculative deal. First and foremost, Dello Russo could back up on this verbal proposal after getting RSR's hopes up and ask for more land or money.

The City could make the swap, but then RSR could struggle to find financing for the property and be unable to purchase the golf course land from the City.

The deal could also potentially complicate the Camp Wewa purchase since the two Harmon Road parcels were going to be sold to offset the purchase. But if the Wewa deal does not close, the City would be left needing land to create a recreational facility that it previously had before trading it to Dello Russo.

It will probably take a bank shot to make everything fall into place, but it's a risk Nelson seems willing to take.

After the residents concluded their public comments, the four commissioners spoke briefly. Their attitudes ranged from hopeful, to guarded optimism, to wanting more information to form a solid opinion on how to move forward.

"I just want to say thank you all for showing up," said Commissioner Doug Bankson. "We're here to represent you and your values, but because it's a quasi-judicial system, we haven't been able to freely say 'hey, we're here and we're going to fight for your rights,' because it's not right for citizens to have the big guys come in and make money at the expense of the little guy. Self-determination... it is a gift of God. So when they say they're going to come in and de-value the properties that were there... not only no, but purgatory no! I'm a pastor, so I can't say the other. That's where our hearts have always been... to protect the rights of the people. I think this is a tremendous opportunity. I think the numbers are there. All of these things are coming together, so again I think this is an absolute opportunity... different ideas have been shared. It's your choice, and you can figure that out. It's your land, and it's being protected for you." 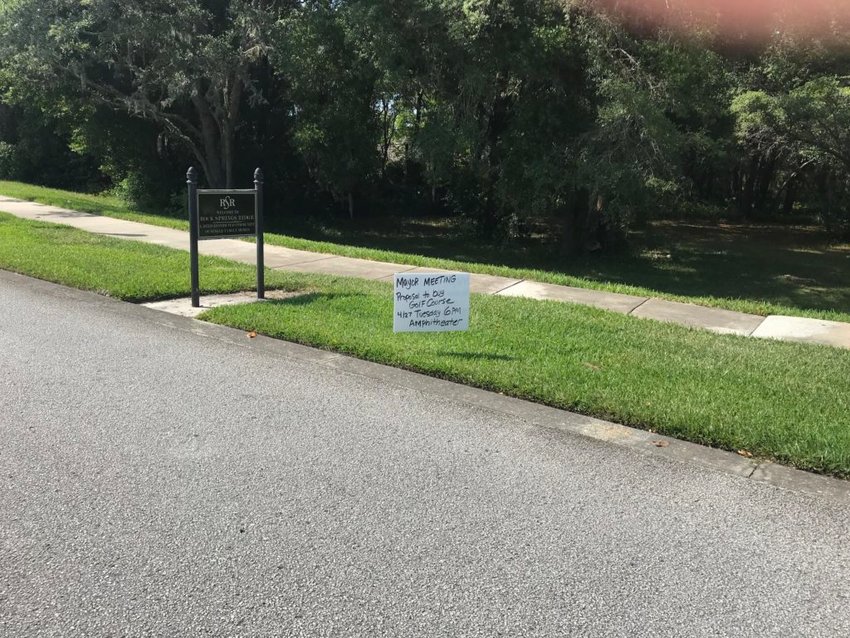 "I'm here both as a commissioner and as a resident," said Commissioner Diane Velazquez. "We have been trying as a community to really sustain this golf course whether you live on it or not. I want to commend Mayor Nelson for taking the initiative and sitting down with the attorneys. I know it wasn't easy. But we've come to this juncture, and so this is the deal that they are offering us. I have some questions, but I will tell you this... as a commissioner and resident of RSR I will support whatever our community wants. This is an opportunity... as long as we can all agree to own this, and have a plan. I look forward to sitting down with the mayor and commissioners [at City Council] so we can understand what we are getting into financially - the City... all taxpayers, not just RSR."

"This has been a topic that has been hot and heavy over the last week since last Wednesday's City Council meeting," said Commissioner Kyle Becker. "I'm still trying to get all the details myself. I know the idea of uncertainty looms large, but I've been on the Council for five years and the applicant involved with this property has not brought anything for us to decide. In fact, I think you could argue pretty successfully that developing rights on that property do not exist. So if nothing were to happen today, I feel confident as your representative I'd be able to defend that point for you up on Council. With that said... uncertainty looms large for you now, and that's why you're here. If you think about the next steps that you need to take... we want to look at this in a logical manner. The biggest thing that has to happen, and that you as a community have to decide, is if this is the action you want to take. You can't create a recreational district if you don't have 66% support within your neighborhoods. This is all predicated on you being able to deliver on the support you are showing tonight, and show us as a City Council that this is the direction you want to take. Like the mayor said, we don't want to be in the business of owning golf courses. But we certainly want to be in the business of making sure a community like Rock Springs Ridge... one of the strongest and premier communities in the city of Apopka, is thriving. I look forward to hashing out the details at the next meeting."

"I'm a Rock Springs Ridge homeowner as well," said Commissioner Alexander H. Smith. "Someone earlier asked how much is the golf course worth? That's what I want to know too. I want to make sure we are trading apples for apples. I want to make sure if we are giving $2.4 million in properties, we are getting back $2.4 million. But I will always support the people... so I support what the residents want to do because I'm your servant. I serve you."

It all sounds good... even great if you are a homeowner in Rock Springs Ridge. But keep in mind, Dello Russo has purchased many golf courses in communities throughout Central Florida, and made many deals, offers, filed many lawsuits, and is not the most predictable partner in the world of business.

He purchased the RSR Golf Course in 2005, closed it in 2014, and has kept the residents in suspense ever since. It's doubtful you've seen the last of his curveballs with this offer.