Voters in six counties agreed to tax themselves to buy swamps, forests, beaches, and lakes 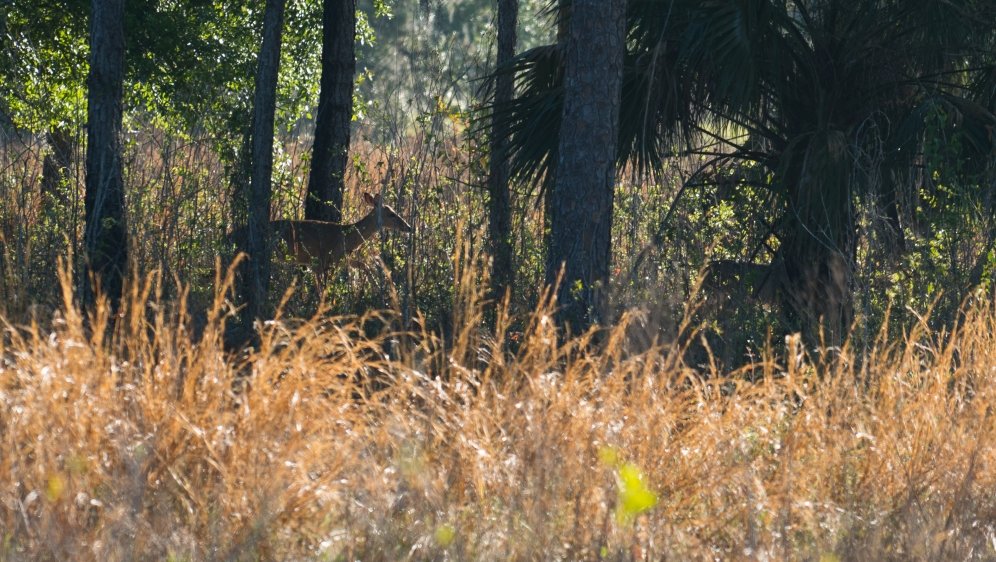 Back when I was a kid in Pensacola, the church that my parents and I attended held services three times a week. We were there every time the doors were open: Sunday morning, Sunday night, and Wednesday night.

I liked the Wednesday sessions best because every couple of months, we’d have a “song service.” That meant we didn’t have to pretend to pay attention to some dour preacher warning us against the evils of rock’n’roll and long hair on men.

Instead, the congregation would holler out page numbers from the Baptist Hymnal. Then the grinning choir director would lead us in vigorous renditions of songs like “Wonderful Grace of Jesus” and “The Old Rugged Cross.” One request that came up every time: “Count Your Blessings.”

I have been humming that hymn quite a bit lately, and not just because of the Thanksgiving holiday. It’s been stuck in my head ever since the election results came in.

No, I don’t mean the reelection of a governor who broke his promise to fix our toxic algae bloom problem, supports destructive toll roads, and constantly kowtows to developers. (To be honest, though, maybe I should be grateful about it, because it guarantees I’ll have a lot to write about over the next two years.)

Instead, I’m talking about what the voters did in six Florida counties.

They voted to tax themselves to buy environmentally sensitive land.

In Alachua, Brevard, Indian River, Nassau, Pasco, and Polk counties, voters said yes to either a sales tax hike or a property tax hike to pay for saving swamps, forests, beaches, and waterways from being torn up by bulldozers.

Let’s take a minute to appreciate out how counterintuitive that is.

In Florida, our politicians are constantly promising more tax cuts. I keep expecting one to promise he or she will personally turn off the air conditioning in all government offices and leave the employees sweltering as if they’re in a state prison.

Yet these voters opted to tax themselves MORE.

And they did it because they wanted to save some greenery in an ever-increasing sea of gray asphalt.

Marveling, I called Clay Henderson, a longtime Florida environmental activist whose new book, “Forces of Nature,” is a history of land preservation efforts in the Sunshine State. He had a theory about these votes:

“People are frustrated by the amount of growth and the pace of growth,” he told me. “This is something that they can do about it.”

Henderson and I are far from the only ones who noticed this “green wave” (which turned out to be more genuine than the “red wave” we were all promised). Traci Deen of Conservation Florida, a statewide land conservation group, spotted it too.

“Floridians don’t always agree, but we do find common ground in the land and water we share,” Deen, a sixth-generation Floridian, wrote in a recent Tampa Bay Times op-ed piece. “It’s a great love of place. It’s part of our ethos, our Floridian ethic, our heritage, and our legacy.”

This green wave has been rolling through Florida longer than you may think.

Volusia voters approved a new version of the land-buying program called Volusia Forever in 2000. They approved it a third time in 2020.

That kind of longevity speaks volumes about the way people feel toward those natural lands that are part of what make Florida special, Henderson said. They have “this sense of ownership.”

By his count, there are now 19 of these local-voter-approved land-buying programs going on around Florida.

Some, like the one in Volusia, have been renewed more than once. The Brevard County program is another three-time winner, according to Florida Today.

“Brevard County voters … approved extending the Environmentally Endangered Lands Program, known as EEL, in a decision that could potentially double the roughly 28,000 acres of managed conservation land under the program,” the paper reported this month.

How much of a tax are they voting for? According to Today, “the owner of a single-family home in Brevard with a taxable property value of $200,000 would pay $29.30 a year.“

Think of all the things you could buy for $30 (besides a $30 gift card). You could get a nice turkey for Thanksgiving. Or some of those “flameless candles” that are really just flashlights. Or two of the “Pull-My-Finger Santa” toys.

Yet seven out of 10 Brevard voters decided to spend it on saving rivers, forests, swamps, lakes, and beaches. Sounds like a good bargain to me.

I found the ballot results in Polk County particularly fascinating. It’s one place where the push to save the environment ran into pushback.

Yet, according to the Lakeland Ledger, the proposal passed with 58 percent of the vote.

There’s always a lot going on in “Imperial” Polk. Just this week, for instance, a fugitive arsonist whose car had been stopped by deputies tried to sprint across Interstate 4 toward the T-Rex at the entrance of Dinosaur World, only to be shot in a particularly sensitive spot.

“We changed the looks of his groin forever, if you know what I mean,” Sheriff Grady Judd announced rather proudly.

Polk is the pockmarked heart of our destructive phosphate mining industry. But it’s also home to some key environmental features. They include the Green Swamp — the source for four major rivers — and the Lake Wales Ridge, an ancient sand dune running up the spine of the state.

To preserve some of those gems, Polk voters approved a land-buying program in 1994. It proved extremely successful, allowing the county “to acquire more than 25,000 acres, including what is now Circle B Bar Reserve, a 1,267-acre tract near Lakeland that has become one of the state’s most popular birdwatching sites,” the Ledger reported in July.

But that program expired in 2015. The county commissioners didn’t want to continue it, according to Suzanne Lindsey, a Winter Haven native who chairs a group called Polk Forever that pushed for a new land-buying program.

The commissioners thought it wasn’t necessary anymore (I’ll tell you why in a minute), but it turned out they were wrong, she said. That’s why the Polk Forever group went to the commissioners this year and asked them to put a new land-buying measure on the ballot.

The vote was close — 3 to 2. The ones who voted no (one of whom is a developer) both said they supported the concept but felt that A) the timing was wrong and B) the tax levy (20 cents per $1,000 of taxable property) was too high.

But the other three commissioners said it was up to the voters to decide those questions and gave it a green light.

That wouldn’t be the last time the measure would hit objections.

The vice chair of Polk Forever is Marian Layton Ryan, who’s been a staunch Central Florida environmental advocate since the 1980s. I asked her to tell me her group’s secret of success.

“Our secret was that we pushed every button we could to get the word out,” she said.

That included everything from running radio ads on the country music station to putting on a traveling art show that displayed images of the landscapes being saved. They also handed out brochures and palm cards touting the proposal.

Ryan said people in their group went to every club meeting, special event, and festival in the county that they could, making their case face-to-face whenever possible.

That’s how they found out they had a potential opponent in the local Republican Party, Ryan said.

“We knew we had problems early on because their clubs weren’t returning our calls,” she said.

The Polk County Republican Executive Committee never officially announced its opposition, she said, but had advised local Republicans to vote against the measure.

The chairman of the Polk GOP, J.C. Martin, told WFTS-TV he was voting against the Polk Forever proposal because he wanted to see “a more comprehensive plan for the county’s lands before another tax is passed.”

I tried contacting Martin to ask him about this, but apparently he was too busy to call me back. Perhaps he was out searching Haines City, Frostproof, and Eagle Lake for more drag shows that the governor can prosecute.

“Our board is very diverse,” Ryan said. “It includes Republican hunters and fishermen, along with longtime bunny-huggers like me. This is definitely a bipartisan issue.”

One hunting guide working with Polk Forever, Travis Thompson, summed up his thinking for WFTS: “If we don’t do this today, these lands will be written as other things. …These lands will become houses.”

The reason the 2015 Polk commissioners didn’t think they needed to continue the land-buying program is that the year before, voters statewide had just approved one.

In 2014, 75 percent of Florida voters approved an amendment to the state Constitution that said the Legislature had to spend a certain amount of money buying environmentally sensitive land. Amendment One was expected to raise $22 billion over the next two decades.

Surely there’d be plenty of land preservation going on using that money, right?

Wrong. Our fine legislators, who always pay close attention to whatever developers want, paid absolutely none to what the voters wanted. Instead of buying environmentally important parcels, they blew millions on salaries, insurance, and new vehicles. Amendment One turned out to be Legislature One, Amendment Zero.

You’d think, as politicians, they’d be compelled to support something so popular. You’d think they’d even run on that: “I helped to save that swamp where you like to go look at migrating birds and that lake with the good fishing! Vote for me!”

But I know of only one recently elected legislator who made land preservation part of her pitch: Lindsay Cross, a Democrat, who just this week was sworn in as a new member of the House.

During the campaign, Cross made sure to play up her work with the Tampa Bay Estuary Program and her time as executive director of the Florida Wildlife Corridor organization.

Both political parties, she told me, usually treat the environment as nothing more than one of several bullet points on the back of a campaign brochure. But when she was campaigning, the voters she talked to understood that it’s more important than that.

“It’s something they were really excited about,” she said. She noted that the destructive 2017-2018 red tide outbreak was “recent enough that people know what clean water means.”

At some point, surely some smart Florida candidates will copy Cross and turn “saving forests from bulldozers” into a major talking point.

On my more optimistic days, I even picture a majority of our Legislature embracing the green of the environment instead of the green of campaign cash, because it’s what the voters want.

In the unlikely event that happens in my lifetime, I’ll bust out the old Baptist Hymnal and start bellowing “Count Your Blessings.” For now, though, all we can do is offer fervent prayers that our so-called leaders will someday see the light.