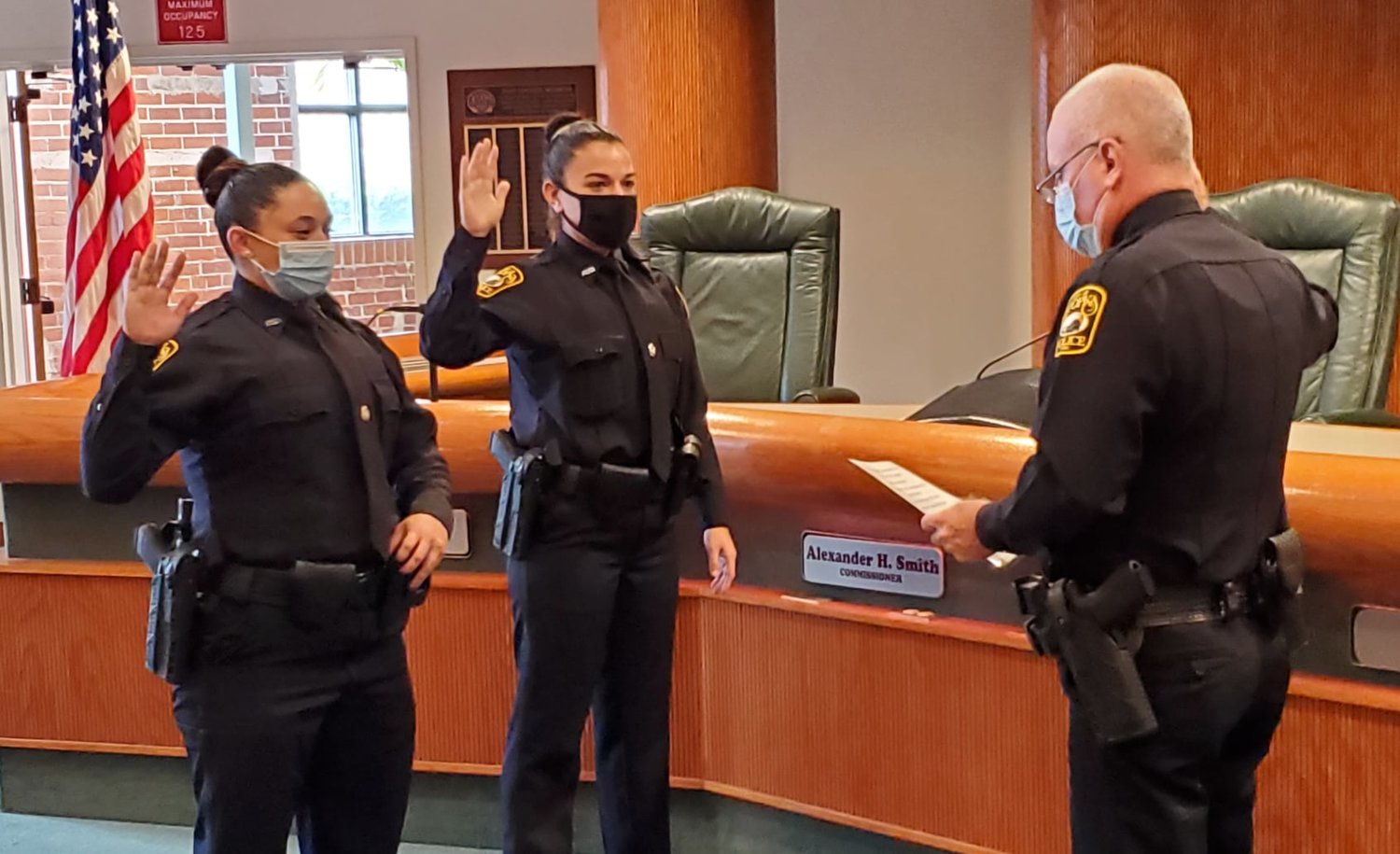 The Apopka Police Department added four new officers to its police force last Friday at the Swearing In Service at City Hall. Taking an oath to serve and protect, these new officers were sworn-in by Apopka Police Chief Michael McKinley. As a tradition, each new officer selected family members or friends to pin their police badges to their uniforms.

Officer Joey Marinacci, born in Sarasota and raised in Clermont, is twenty-three years old. He graduated from Mt Dora High School, before continuing on by pursuing and earning his degree in Criminal Justice from Columbus State Community College. Following the completion of this degree, Marinacci advanced onward to the Lake Tech Public Safety Academy (Police Academy) where he graduated as well.

When asked why he wanted to become a law enforcement officer, Marinacci shared it was because he loves helping people and being a part of a community like Apopka. While there are many challenges to this profession, Marinacci said he is eager and ready for those challenges because he knows that every day is different.

Besides law enforcement pursuits, Marinacci spent time working in the restaurant arena with his father, and also enjoys baseball and traveling.

Officer Liana Marie Espaillat, also twenty-three years old, was born and raised in Orlando, Florida. Espaillat graduated from University High School and continued her education at the University of Central Florida, where she graduated with her Bachelors in Criminal Justice as well. Espaillat attended the Police Academy at Valencia State College, School of Public safety.

Before turning to Law Enforcement Espaillat was in the restaurant business, working at the Olive Garden as a server. Her hobbies include spending time with family and friends, reading, and riding her bicycle. When asked if she had any additional information that she wanted to share, Espaillat said, “Thank you to my family for always supporting me and pushing me to my furthest limits. Love you guys.”

Officer Rolando Matias, twenty-eight years old, was born in Orlando and raised in Zellwood. Matias graduated from Apopka High School in 2011 before pursuing a career in law enforcement because he too was eager to serve his community and wanted to do something larger than himself. Matias felt that by being a role model to the Hispanic community, he could help gain trust within the community.

Immediately after graduating high school, Matias joined the workforce by working for a residential painting company, where he focused his time for three years. In 2014, Matias and his wife, Indira Hondoy, decided to open their own residential painting company, specializing in new home construction. As the company turned into a big success, Matias said he is extremely grateful and blessed to be able to provide for his family.

During his time off, Matias enjoys spending time with their three daughters, playing strategy card games, taking long runs in the park, working out, and binge-watching movies and tv shows.

Officer Lauren Bordeaux, twenty years old, was born in Long Beach, California but raised in Wellington, Florida where she graduated from Wellington High School. Bordeaux earned her Bachelors degree in Criminal Justice from the University of Central Florida before attending the Police Academy at Valencia State College, School of Public Safety. Bordeaux shared that she decided to pursue a career in law enforcement after volunteering with the Red Cross and witnessing the positive impact first responders have on the lives of individuals in crisis.

When she's not serving, Bordeaux enjoys anything that involves animals and being outdoors, including horseback riding. She also appreciates her time volunteering for a variety of community organizations.

The Apopka Police Department, city officials and family members in attendance extended their congratulations to these newest Apopka Police Officers, wishing them success and safety throughout their law enforcement careers.