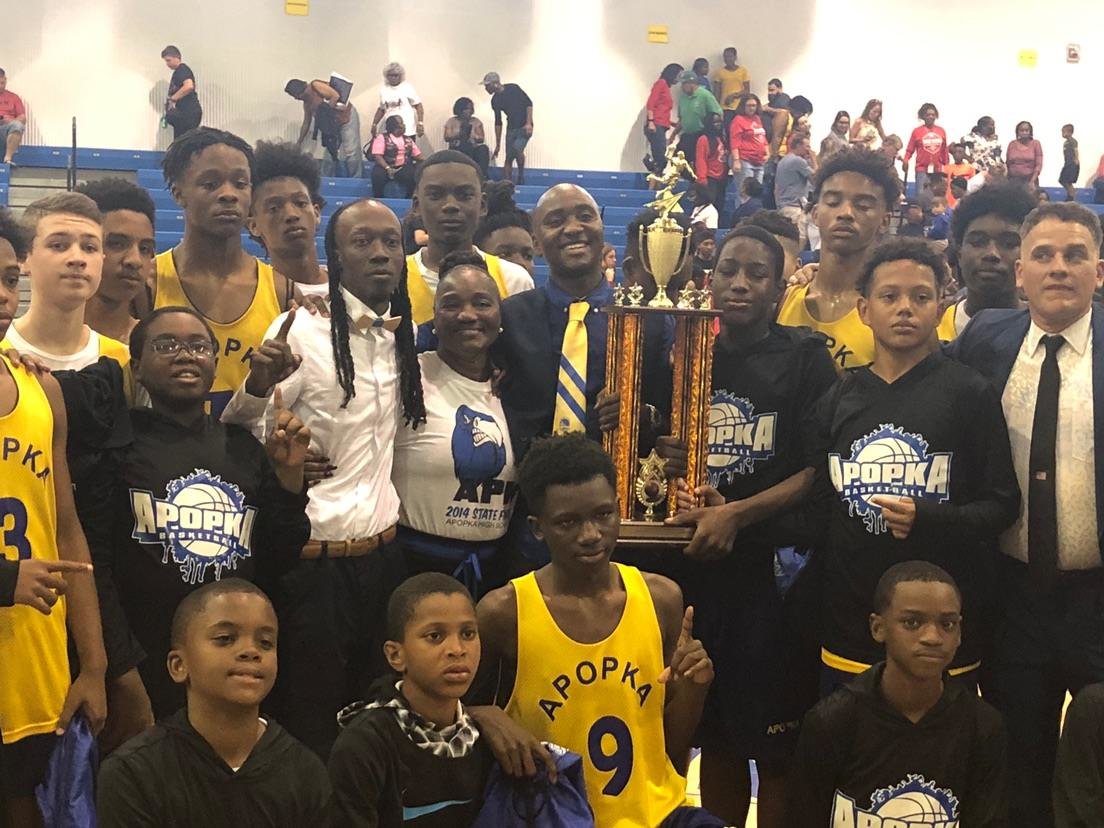 The Apopka Memorial Middle School (AMMS) boys basketball team completed a 10-0 season Wednesday night by defeating Ocoee Middle School in a thrilling 45-43 overtime victory in the Orange County championship game. It was the first title for the Seahawks and the first 10-0 season in school history.

"First and foremost I want to give credit to the Ocoee Cardinals on an amazing season and a hard-fought championship game tonight that went right down to the wire," said AMMS Coach Mark Washington. "They are a well-coached and very talented team for sure. It was only right that it took an additional OT period to finally determine a winner."

AMMS ran the table in the regular season with impressive wins by 20-plus points over its first five opponents and then won the Cluster Championship over Ocoee 58-49 to close the regular season 6-0. Then, three straight wins in the playoffs set up the rematch with Ocoee, which turned out to be the closest and most exciting game of the season.

The Seahawks led most of the first half and thanks to a timely 3-pointer by AMMS eighth-grader Gavin Justice at the buzzer going into half time after Ocoee took a 1 point lead 21-20. Justice made a heads up play and got the shot off right before the buzzer, giving Apopka a 23-21 lead and regaining momentum going into the half.

The Cardinals retook the lead 33-31 by the end of the third quarter by outscoring the AMMS 12-8 in the period, but the Seahawks clawed back into the lead 41-39 with seconds to go in the seesaw game. However, with only one second on the clock, Ocoee was fouled and hit two clutch free throws to send the game into overtime.

Apopka sealed the deal with stellar team defense led by Elijah Louis, Jeremiah Mompremier and Antonio Ferguson by holding Ocoee to only two overtime points, while clutch field goals by Camerin James and Jamarie Sibley were the difference.

James scored 16 points and was described as the most outstanding player of the game by Washington. He also led the Seahawks in points, rebounds, and blocks throughout the season. Sibley added 11 points after overcoming a tough shooting night from the field. He hit a clutch 3-pointer and free throws late in the game. Louis was the defensive player of the game according to Washington. He was tasked with guarding Ocoee's best player - Jaylen Smith. Louis held Smith to 10 points, and also added 10 points for the Seahawks.

"I love these boys for life," said Coach Melvin Bolden. " I'll always be there to support them. Today is a day we will never forget. It was a great season. It was a magical experience. I couldn't ask for a better group. County Champions!"

Washington was also appreciative of the Apopka community for its support of this record-breaking team.

"It was amazing to see just how much love and support there was from the Apopka community tonight. For generations, there has been so much talent to walk these halls and it's an honor and a privilege to win this one for all of the Apopka teams past, present and future. Much love all around. One team, one dream! Apopka this one is for you!"