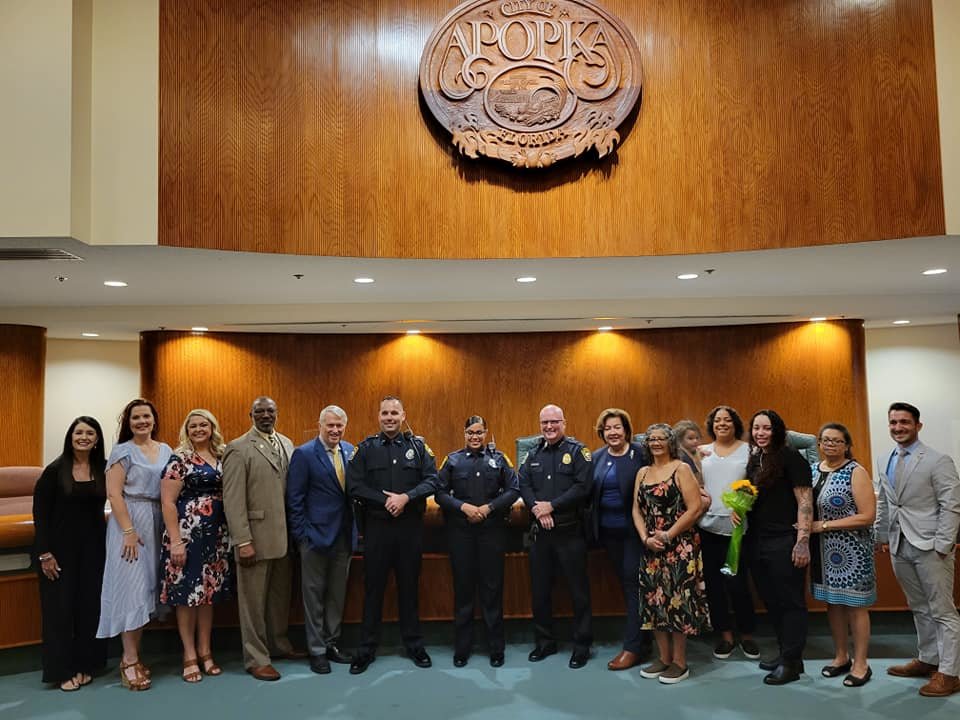 "Please join us in welcoming two new Police Officers to our team! The APD said on its Facebook page. "We are thankful each of them has taken this oath to serve and protect our community, and look forward to watching them grow in their careers at the Apopka Police Department. As a tradition, each new Officer selected family members or friends to pin their Police badges to their uniforms."

Officer David Hurst II is 38 years old and was born in Winter Garden.  He grew up in Apopka and graduated from Apopka High School in 2002. Hurst continued his education at Valencia College, where he obtained his Associate's Degree in Criminal Justice.  His prior law enforcement experience was with the Groveland Police Department for five years, and three and a half years with the Center Hill Police Department.  Hurst did military contract work overseas during the War on Terror.  He provided security at Forward Operating Bases (FOB) in Iraq, Afghanistan, and Qatar from 2009–2015.

Hurst is married and has a two-year-old son - David Hurst III.  Hurst’s hobbies include participating in mixed martial arts and spending time with his family.

“There are few professions where comradery is paramount and that is what I enjoy about the law enforcement profession," said Hurst. "It is not just a job…it’s a way of life!”

Officer Asia Grajales is 25 years old and was born in Bronx, New York.  She was raised in Castle Hill, New York, and graduated from high school in 2015 from the High School for Law Enforcement & Public Safety, located in Jamaica Queens, New York.

Grajales attended Seminole State College Criminal Justice for her Police Academy and graduated in 2019.  She is continuing her education at Seminole State College to pursue a degree in Criminal Justice.  Grajales served in the Army National Guard for three years and was attached to Bravo Battery – 2-116th Field Artillery Unit, and obtained the rank of Specialist/E-4.

Her prior law enforcement career includes three years as a Brevard County Deputy, where she was assigned and patrolled the Merritt Island sector of the county. Asia stated during her time off she enjoys cooking and playing sports.

When asked why she got into Law Enforcement, Officer Grajales stated that she grew up in an environment where cops were despised and her main goal was to help others understand that not all cops are bad.  She stated she also wants to help make an impact on the community the best way she can.

"We are excited to have these two officers join the ranks of the Apopka Police Department," said APD Chief Michael McKinley. "The addition of these two officers with their prior law enforcement experience means they should be able to quickly complete the field training program and start serving our community."