Focus on Gardening: Plant of the Month

From University of Florida (UF), Institute of Food and Agriculture Sciences

A new month, and a new focus – Florida Gardening and Plant of the Month series. For the green thumbs and garden-dreamers alike, we’ll highlight a UF / IFAS feature plant that deserves a spotlight in Florida-friendly gardening.

Interested in adding something new to your garden? If you can grow a tomato, you can grow a tomatillo and husk tomato! From Latin American molés and salsas to ground cherry preserves, these two versatile vegetables are great way to break out of your culinary comfort zone.

Tomatillos (Physalis ixocarpa) and husk tomatoes (Physalis pruinosa or Physalis pubescens) belong to the same family as tomatoes, Solanaceae. Other members of this important family include potato, eggplant, peppers, and petunias.

Like tomatoes, there is a fair amount of variety within these species. Though the fruits are smaller than most tomatoes, the plants of tomatillos and husk tomatoes are not petite. Both bush and trailing varieties can grow between two and four feet in height and breadth. Most resemble tomatoes in leaf and flower shape. 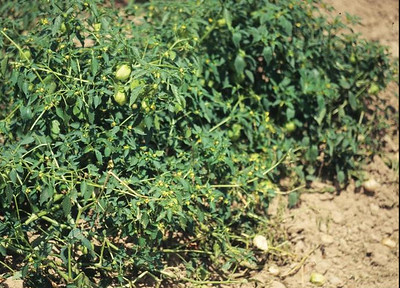 When in doubt, plant and care for tomatillos and husk tomatoes as you would for regular garden tomatoes. There is a key difference; unlike tomatoes, tomatillos do prefer to cross pollinate. Add multiple plants to your garden for a reliable harvest. Transplants are occasionally available but both vegetables start well from seed.

Tomatillo and husk tomato are both sensitive to frost damage. Both species do well in home gardens throughout Florida, but planting times vary. In North and Central Florida, there are two growing seasons for tomatoes. Plant seeds between February and April (Central: January – February) or between July and August (Central: August – September). In South Florida, all three species can be planted between August and February as there is no danger of frost.

Consult the Florida Vegetable Gardening Guide for tomato planting guidelines and follow these for both tomatillo and husk tomato. Remember to transplant these species deep — up to the first true leaves. Roots will form along the buried portion of the stem, increasing water and nutrient uptake.

Soil preparation and watering requirements are also similar to those of tomatoes. Keep all three species well-watered, usually between 1–2 inches of water a week. Plant them in a space that is 2-3 feet from other plants and receives at least 6-8 hours of direct sunlight each day.

Unfortunately, tomatillo and husk tomato suffer from the same insect pests that plague tomato crops. In particular, tomato fruit worm is a problem. For this reason crop rotation is suggested. Avoid planting any of these three crops in a garden space recently occupied by another member of the Solanaceae family.

The best way to prevent pest management issues is to check your plants regularly for early warning signs of insect infestation and diseases. For more information on problems and pests, read Tomato Insect Pest Management on Gardening Solutions.

Tomatillos turn from green to light yellow when fully ripe, but are usually eaten while still green. Husk tomatoes will continue to ripen to deeper shades of orange after they fall or are removed from the plant.

From the Garden to the Kitchen 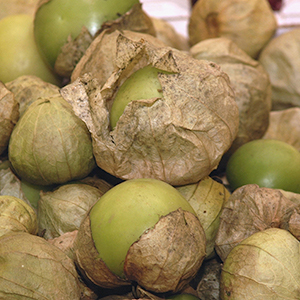 Tomatillos are usually prepared green. Husk tomatoes will continue to ripen to shades of yellow and deep orange. Credit: UF/IFAS

Native to Central America, tomatillos are often used in stews, molés, and salsas. While looking for recipes for your tomatillo harvest, consider Latin American recipes for salsas and chili sauces. Start cooking with this salsa verde recipe from UF/IFAS Extension in Broward County.

Husk tomatoes, on the other hand, are sweeter. Preserves, jams, cakes, pies, salads, and a sweet addition to savory dishes are all good ways to add your husk tomato harvest to the menu. They can also be used as you would tomatillo in many recipes for salsas and other sauces.

In all cases, remove the husks before preparing these tasty fruits.

For more information about tomatillo or husk tomato, contact your county Extension office.