In the time that it takes you to read this report from start to finish, at least one person somewhere in the U.S. will have died in a fatal car accident. Of the more than 37,000 fatal car accidents that occur every year (averaging one every 14 minutes), roughly 1 in 3 collisions involve a driver traveling above the legal speed limit.

A danger to everyone on the road, drivers who speed kill thousands of people every year as a result of not being able to control their vehicles properly, having insufficient time to avoid dangerous situations, and the diminished effectiveness of safety restraints. In short, speeding is often a reckless, unnecessary behavior that can lead to deadly accidents in the blink of an eye.

But how have speeding accidents changed over time, and which drivers are the most susceptible to fatal accidents at accelerated speeds? To learn more, we analyzed five years of Fatality Analysis Reporting System (FARS) data, including every fatal car crash involving a speeding driver between 2013 and 2017. Read on as we break down which speed limits drivers are most likely to disobey (leading to fatal crashes); how these tragic collisions vary from rural to urban roadways; and which drivers are the most likely to be involved in deadly accidents caused by a speeding driver.

Americans are logging more miles in their cars than ever before, and despite the efforts of major manufacturers to help make cars safer with the advent of new technology, in-car tech features could be leaving drivers more distracted instead. Even the noises a car makes to help alert drivers that they might be drifting into a different lane can be viewed as distracting, encouraging drivers to take their eyes (and their focus) off the road in front of them. 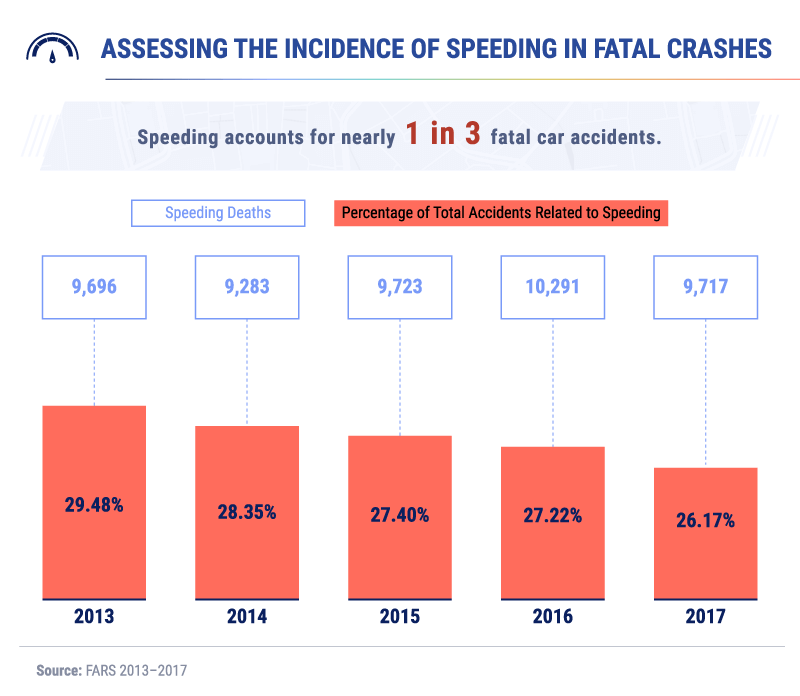 When it comes to the most common causes of roadway accidents, their effects are significantly compounded when one or both drivers are traveling above the posted speed limit. From encountering blind spots on the road to distracted driving and losing control of your vehicle, the actions that regularly lead to collisions can turn from dangerous to deadly when speeding is involved.

Was Speeding a Factor?

If the speed limits in a given area sometimes seem arbitrary from one neighborhood to the next, that’s because they might just be. 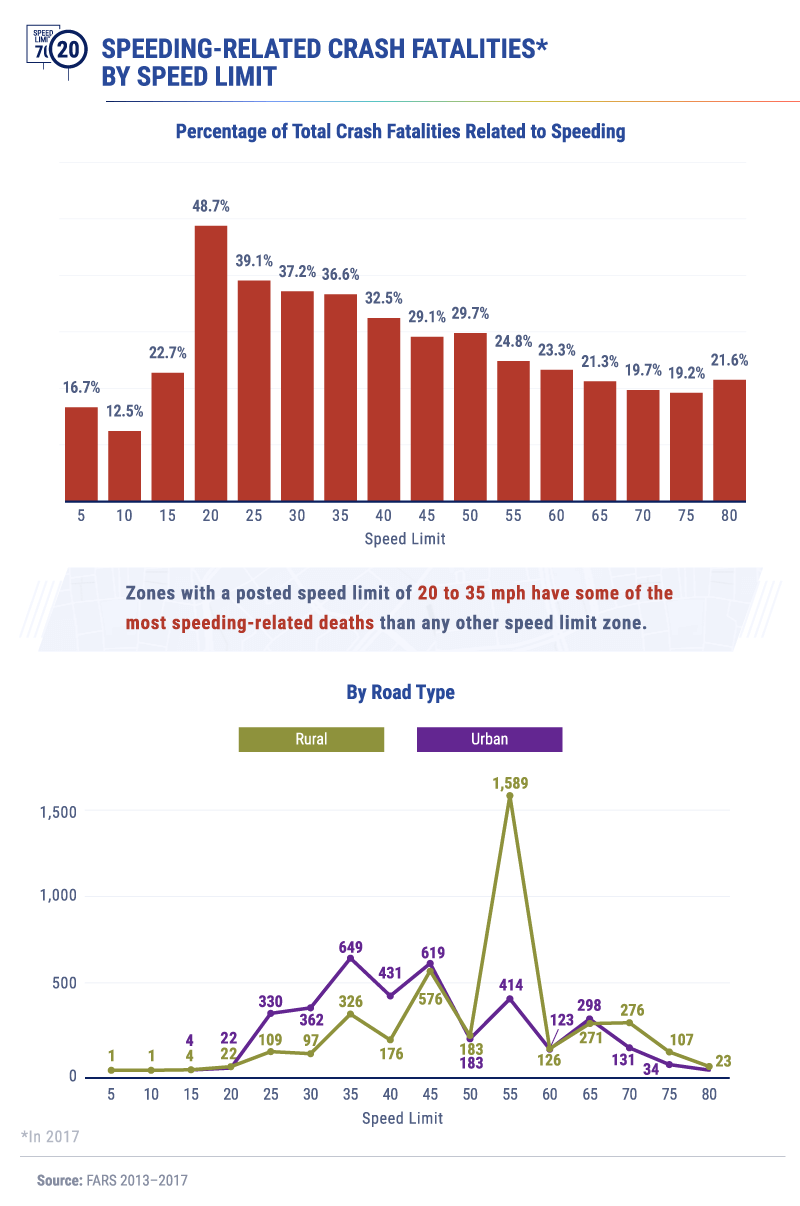 According to the Federal Highway Administration, municipalities currently have no agreed-upon metric to determine the appropriate speed limits on roads or freeways. Instead, legislators take a combination of crash risk, traffic volume, roadway design, and location information into consideration to determine how fast drivers should be able to travel without endangering themselves or the people around them.

As we found by examining 2017 crash data, the highest volume of fatal accidents occurred on roads with 55 mile-per-hour speed limits, for a total of 2,003 speed-related fatalities. In all, speeding accounted for more than one in four deadly collisions that occurred on roads where drivers should be traveling at or under 55 mph. Overwhelmingly, roughly three quarters of fatal accidents on roads with 55 mile-per-hour speed limits took place in rural environments compared to urban area roadways. Despite the fact that they have less traffic, drivers are sometimes more likely to speed on rural roads where there’s less natural protection or lighting to illuminate dangers that may lie ahead.

Deadly accidents were significantly more common on roads with posted speed limits below 55 mph than in places where drivers can legally go 60 mph or faster. In fact, roadways accommodating the highest legal speeds saw some of the lowest proportions of fatalities attributable to speeding. Such was the case for roads limited to 75 mph, where speeding was culpable in fewer than one in five deaths.

Despite being socially stereotyped as “bad drivers,” research suggests women may actually be the safer and more cautious sex behind the wheel. Not only do men have a 77% higher risk of dying in a fatal car accident compared to women, but we found men were more than five times more likely to be involved in fatal accidents related to speeding. 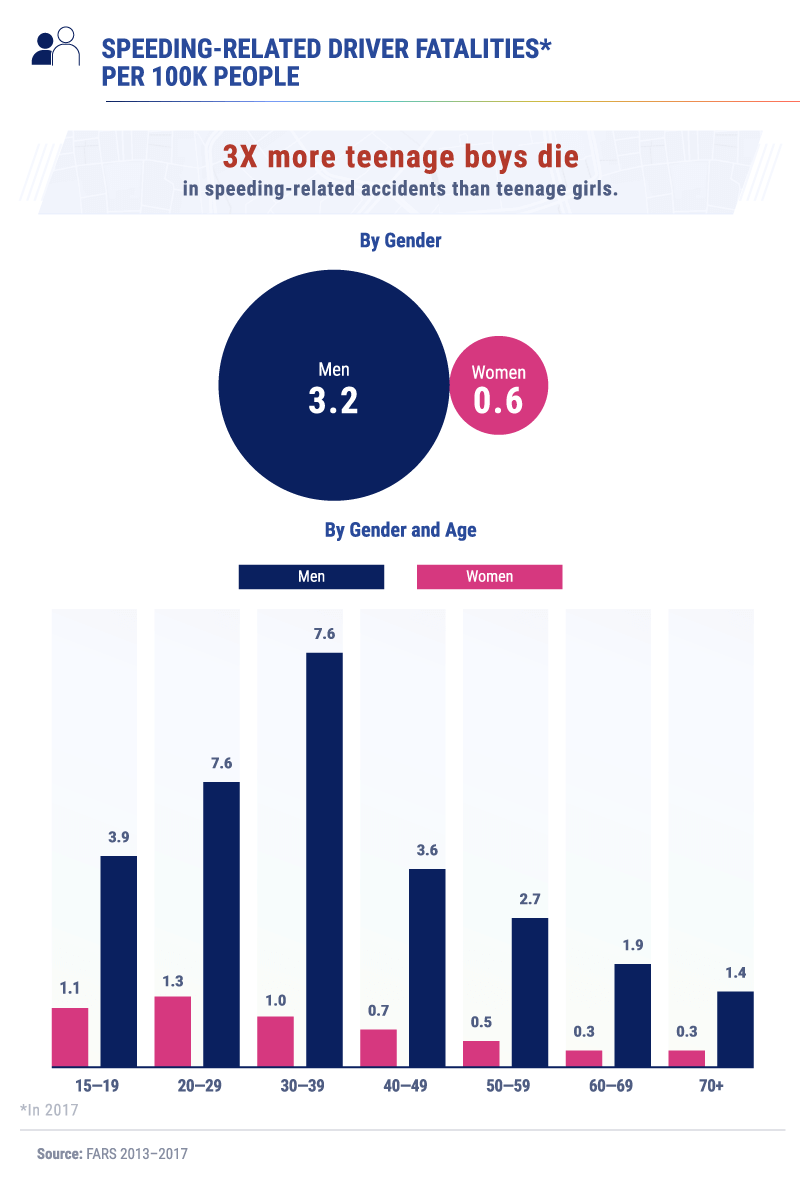 This guide tracks the changes in driving speeds and the likelihood of being involved in a deadly speeding-related collision in 2017:

The reasoning behind setting speed limits can be fuzzy at times, but the consequences of driving beyond the posted speed limit are often black and white. Still, we found enforcing stricter laws and regulations against speeding drivers is not likely to deter their reckless behavior. 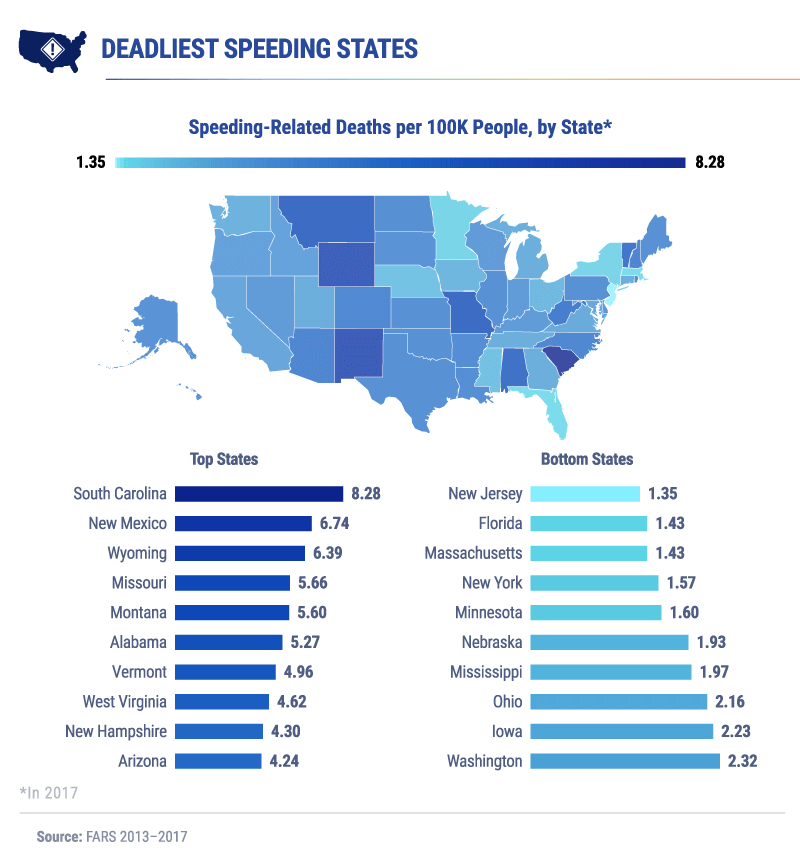 And while New Jersey (1.35 speeding-related deaths per 100,000 residents) and Florida (1.43) had the lowest rates of these tragic accidents, Florida is still considered one of the most dangerous states in the country for drivers.

Typical rush hour congestion may cause a majority of motor vehicle accidents, but the same can’t be said for speeding-related fatalities. 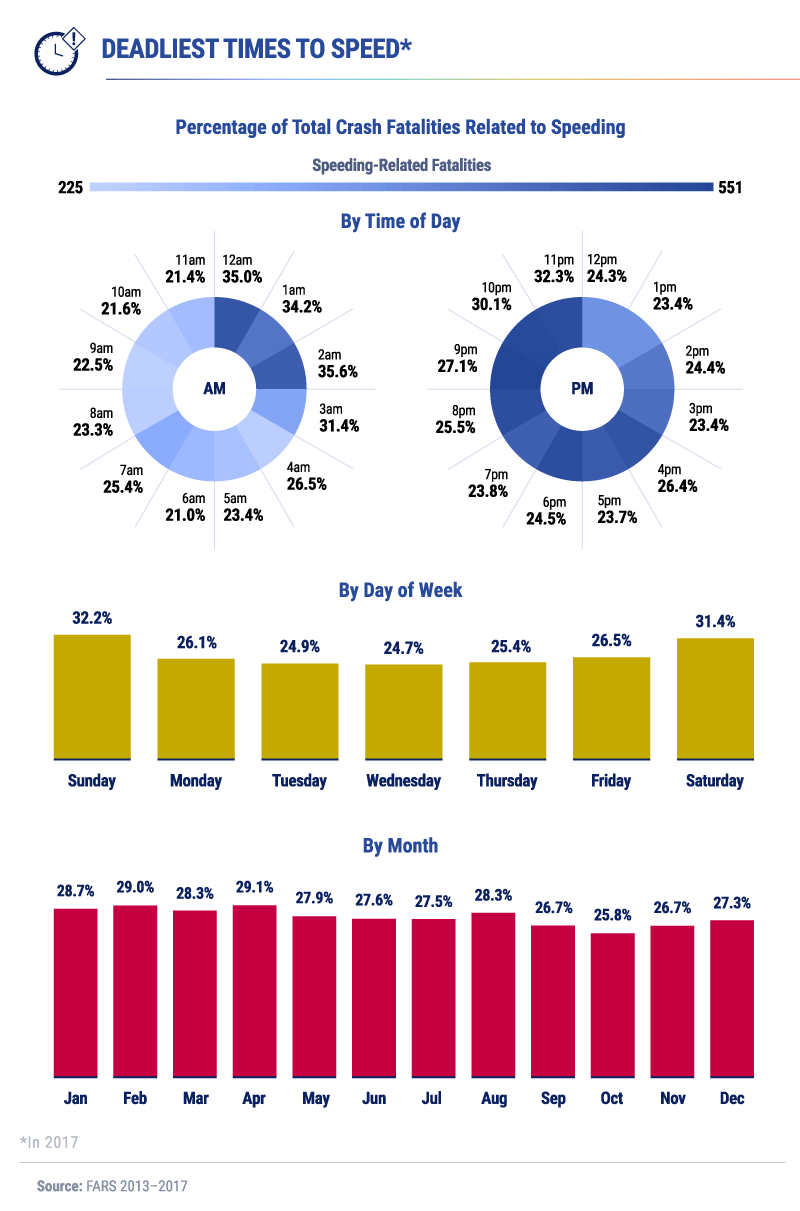 Unlike other causes for collisions, we found the most common times of day for deadly speeding accidents were between 12 and 2 a.m. for the morning hours and between 9 and 11 p.m. for the evening. According to some experts, a more heavily trafficked road can make drivers feel the need to be more alert and aware of their surroundings. In the absence of potential threats like other vehicles or pedestrians, drivers are more likely to exhibit reckless behaviors, including speeding.

Weekends were the most common days of the week for speeding-related fatalities, with Friday (27% of deaths in 2017), Saturday (31%), and Sunday (32%) accounting for far more fatalities than accidents that occurred between Monday and Thursday.

April had the highest proportion of speeding-related accidents in 2017. Wednesday has become more deadly for speeders since 2013, with speeding fatalities on this day increasing more rapidly than any other day of the week.

The moment you sit down behind the wheel of a car, you instantly become responsible for not only your own life but the lives of other drivers around you. For these reasons, obeying the rules of the road won’t just help you avoid getting a ticket — they could help save your life. Every year, thousands of fatal accidents are attributed to speeding drivers, particularly teenage boys and men. Rural areas are sometimes more likely to experience these deadly collisions, and speeding-related crashes typically happen at night or in the very early morning, outside the context of rush hour.