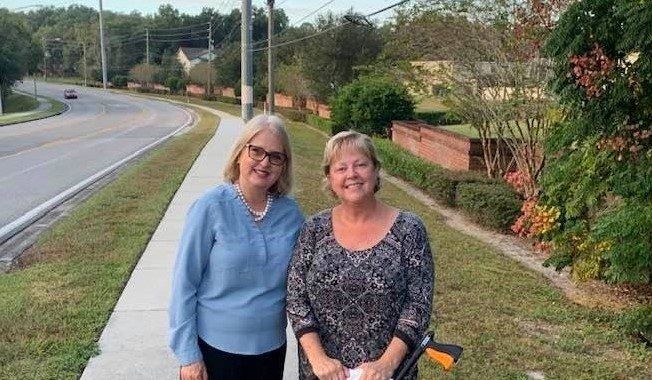 When Wekiwa Springs Road won the District 2 Corridor of the Year Contest, it didn’t come easily, as a lot of hard work and labor was put into sprucing up the front of each neighborhood along the road.

The honor did come bearing gifts, however.

Along with the tangible gifts of new LED street lights and benches, which will be placed in the right-of-way for all to enjoy as they trek up and down the beautiful street, there were more intangible gifts received as well.  Neighbors met one another for the first time from their own subdivisions, and from other communities located up and down the roads. Connections were made, conversations flowed and the word "neighbor" deepened with authenticity. The effort this contest required sparked constructive communication as well, providing yet another gift: the fulfillment of working together towards a common goal.

The contest, held among four corridors in Orange County’s District 2, featured Hiawassee, Magnolia Homes, Sheeler, and Wekiwa Springs roads. They were selected as finalists because each road has a great number of homeowners associations (HOAs) which have been awarded Commissioner Christine Moore’s HOA of the Month honor, and those HOAs have leaders who routinely attend the commissioner’s Quarterly Neighborhood Leaders Meetings.

Commissioner Moore said, “This entire contest’s purpose was to reframe the understanding of HOAs to show they are helpful, collegial groups and through increased communication HOAs show they care about the community, and ultimately, property values.”

Some HOAs posted on message boards announcing a clean-up day for the contest, while others relied on email or social media to encourage everyone to pitch in, and still others led by example, working several hours on many days leading up to the day of judging in early October.

Susan Bonds, who is president of the HOA that serves Majestic Oaks on Wekiwa Springs Rd. told Commissioner Moore’s office, “My treasurer, my husband, and I spent a great deal of time tending to the front of subdivision to make it ready for the day the judges would come by. My advice is to recruit board members for the HOA who you know care a great deal about their personal property.”

Bonds went on to say she realizes everyone can’t pitch-in physically, that’s why when her HOA sends notices to property owners, they ask if anyone may be willing to assist with money to make their front area really look sharp. Yet, she says, “When we send our dues notices, we have asked for sweat equity too.”

It just so happens Majestic Oaks resident Lee Yarborough realized about two years ago that to make a road really remain clean and relatively free of litter, she had to take a stand. Yarborough met Commissioner Moore on Wekiwa Springs Rd. early one morning as the commissioner got out of her vehicle to talk to her.

Yarborough said she told the commissioner it was seeing a box fall off a truck on Wekiwa Springs Rd. that spurred her into action.

“As I saw it fall, I was walking with my husband," she shared. "I told him someone has to clean up the mess it’s created. Then I told him, I’m that someone.”

And she has held true to that conviction. Every week, at least once, you will see her with her cart and grabbers walking about one mile each side of the entranceway to Majestic Oaks, picking up litter.

Orange County Commissioner Christine Moore, District 2 and Lee Yarborough of Majestic Oaks
The collaboration that comes through friendly competitions like Corridor of the Year can really make a difference in how a neighborhood is viewed. And realizing that a community is on the right track by winning an honor, such as Corridor of the Year, keeps residents like Lee Yarborough inspired.