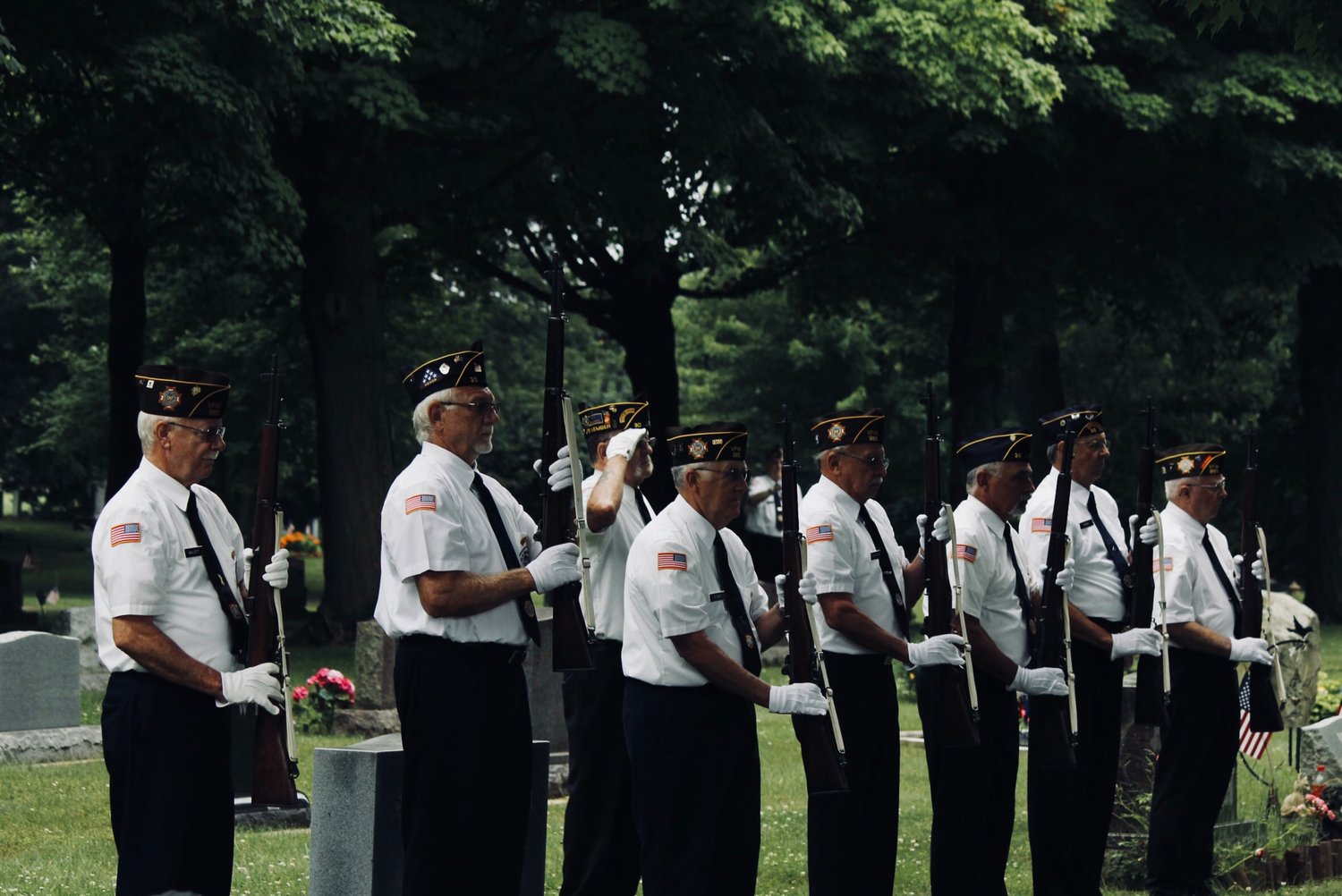 "You'll want to stand back," the elderly man said firmly, holding an Army-issued M1 Garand rifle and wearing a military uniform and a frown. I took a step back, as did others in the crowd, while he aimed his weapon at the sky and pulled the trigger, along with six other members of VFW Post 9927 out of Kettering, Ohio. The explosion from the seven guns echoed loudly off the mausoleum walls. One of the shell-casings bounced next to my shoe, and then two more rounds went off in rapid succession. Smoke filled the air as we made our way into the chapel.

I attended a funeral last month for my wife's cousin Jesse. It's a funeral that shouldn't have happened.

Obituaries never tell the whole story, but this one certainly hits the tragic notes. Jesse was 28 and is survived by a wife and two children.

I didn't know Jesse, but I learned a lot about him from his friends, family, and officers at the Oakwood Public Safety Office (OPSO). He was a born leader, a perfectionist, and driven to excellence. He joined the Marine Corps straight out of high school. He served with the Ohio State Highway Patrol before joining the OPSO. A Marine, Highway Patrol Trooper, Police Officer, Firefighter, and EMT - all by age 28. By any account, Jesse was on a trajectory to become a future police chief or whatever career path he chose to pursue.

"He had his whole life in front of him." It's what you say at a funeral for a 28-year-old. But in Jesse's case, nothing could be more true.

The Oakwood Public Safety Department (OPSD) is one of only 131 fully-consolidated police and fire departments in the country. Jesse was one of the 29 public safety officers that are state-certified in law enforcement, firefighting, and emergency services. The OPSD Chief, Training Officer, and Unit Commander all spoke at the service, and even though they only worked with Jesse a couple of years, all three men were overcome with emotion during their remarks.

It was evident that the OPSD is a proud department with loyalty and honor very high on its list of priorities. They stood together in unity and supported Jesse's family at the memorial service.

After the service, we followed in the back of a funeral procession led by an ambulance draped with black ribbons that transported the casket, fire engines, and police cruisers from all over the state. The five-mile journey from the Kettering funeral home to the cemetery in Dayton took about 30 minutes. On the way, we passed through Oakwood, where Jesse was a public safety officer.

Oakwood is a small town in southwest Ohio with a population of just over 9,000. But on this solemn day, it had a collective heart the size of a metropolis.

As we passed by, the residents stood on both sides of the road silently... in honor of Jesse.

On a workday, they stood. Veterans saluted. Students and teachers walked to the side of the road to honor Jesse. Nursing home residents put hands to hearts as we passed by. Joggers stopped. It felt as though the entire town of Oakwood paused its day to pay respect to a fallen soldier and first responder. To one of their own.

Jesse stood in the gaps for his country and his community. He protected us. But somehow, we could not protect Jesse from the dark thoughts that caused him to extinguish his promising future.

It seems as though society needs a villain to make death more acceptable and an action to take to stop it from happening again. If COVID-19 takes a life, we have the virus for an enemy, and we can debate how best to protect ourselves from a pandemic. If an officer dies in the line of duty, we have a shooter to bring to justice, and we can debate gun violence or better ways to protect law enforcement officers.

But what are we supposed to do with suicide? There are no villains in this story and not much to debate. It leaves us with grief, shock, and confusion.

You're probably looking for a moral to the story by now, so here it is:

All of us are quick to say 'thank you for your service' to a member of the armed forces or a first responder. We attend Memorial Day and Veterans Day events. We participate in golf tournaments, 5K runs, and other events that support first responder causes. But how far beyond that 'thank you' are we willing to go? Does it take a military funeral or a tragedy involving a police officer or firefighter for us to pause and consider what these people face every time they put on the uniform and serve?

Suicide among service members, veterans, and their families is described as a public health crisis by the Veterans Administration. Over the past decade, more than 60,000 veterans died by suicide, and 20 veterans die by suicide each day. Between 2005 and 2017, nearly 79,000 veterans killed themselves, more than the total number of troops who have died in the wars in Vietnam, Iraq, and Afghanistan combined.

Among firefighters and police officers, the suicide rate is also alarming. Statistically, first responders are more likely to take their own lives than in the line of duty.

What can we do nationally and in Apopka to help our veterans and first responders?

It's time to hold the Veterans Administration accountable for the ongoing issues it has experienced for far too long. Demand that they take care of our veterans in a timely, and effective manner. But to make it an important issue in Washington, it has to be in the political conversation. Let your elected officials know that VA reform is a core issue in the way you will vote in the next election cycle.

In Apopka, make sure the City Council is properly budgeting the fire and police departments so that they are adequately staffed and able to meet the standards of the National Fire Protection Agency (NFPA), the Insurance Services Office (ISO), and the Florida Law Enforcement Accreditation Commission.

In his historic second inaugural address, President Abraham Lincoln said it is a national duty “to care for those that have borne the battle".

It's time we, as a society, value these brave souls like Jesse and prove we value them not just on Veterans Day, but 365 days a year. Let's take the next step and go beyond thanking them for their service.

Resources and hotlines that specialize in combating suicide among veterans and first responders:

Our name is a combination of the color for mental health awareness (green) and the “code alerts” used in emergency services. If someone is having a stroke or heart attack first responders will call a “code stroke” or “code STEMI”. The idea is that Code Green is calling a code alert on the mental health of first responders.

The Columbia Lighthouse Project’s mission is to light the way to ending suicide. Our message, like the Columbia Protocol itself, is simple: “Just Ask. You Can Save a Life.”

The Columbia Protocol is a key to ending suicide — a devastating, but preventable, worldwide public health crisis.

AFSP is committed to protecting those who protect us and believes that Veteran and military suicide prevention must continue to be a national priority.

Currently, AFSP is focused on supporting the passage of legislation that prioritizes suicide prevention for Veterans, Service members, and their families, enhancing programs that target at-risk Veterans, and aiding the Department of Veteran’s Affairs in its mission to serve and honor our former Service members.

VA’s top clinical priority is preventing suicide among all Veterans — including those who do not and may never, seek care within the VA health care system. As a Veteran, you can play a role in fulfilling this mission, and VA can equip you with tools to do your part. You can explore suicide prevention resources to build networks of support among community-based organizations, Veterans Service Organizations, health care providers, and other members of your community that strengthen protective factors for Veterans.

If you are seeking answers following an attempted suicide or the loss of a loved one by suicide, please visit the Coping & Support page to find help as you navigate this process.