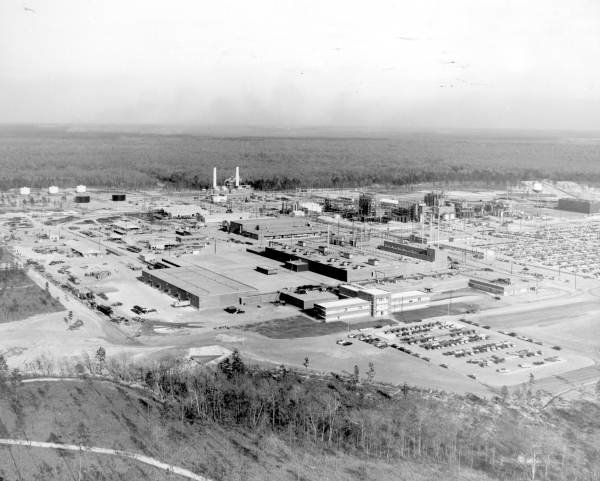 I have a confession to make. I’m oooooold. How old am I? I remember when Steve Martin was just a stand-up comic whose big schtick involved getting small.

These days Martin is the star of a popular Hulu TV show about a trio of snarky amateur detectives. In movies, he’s played a well-meaning dope, a clumsy con man, a phony faith healer, a crafty movie director, and a desperate brain surgeon.

Just once he played a character who was truly evil, albeit in a comical way. In “Little Shop of Horrors” he’s a dentist who loves inflicting pain on his patients, his nurse, and his girlfriend, usually while inhaling laughing gas.

In the end, the laughing gas kills him. “I’ll asphyx – ” he begins, then breaks into peals of laughter.

I thought about that performance last week while reading about a Florida chemical plant that’s been around since the 1950s and is killing us all.

It was in a story in Inside Climate News that was headlined, “Who Were the Worst Climate Polluters in the U.S. in 2021?”

The opening paragraph is a real grabber: “U.S. greenhouse gas emissions climbed by 4.1 percent from major industrial sources in 2021, according to new data recently released by the U.S. Environmental Protection Agency. The increase is the largest year-on-year rise in emissions tallied across more than a decade of reporting.”

The story went on to list the worst climate polluters. They included a coal-fired Alabama power plant that produces more carbon dioxide than any other U.S. facility, a Pennsylvania coal mine that produces more methane than anywhere else and – because there is always a Florida angle to every big story – this plant in the Panhandle.

It’s a Florida nylon manufacturing plant, and it tops the rest of the country in emitting nitrous oxide, aka laughing gas.

When it comes to the climate, laughing gas is no laughing matter.

“Nitrous oxide is 273 times worse for the climate than carbon dioxide on a pound for pound basis,” the story noted. “Emissions from the facility in 2021 equaled the annual greenhouse gas emissions of 1.5 million automobiles, according to the EPA”

For some reason, this news did not strike me as funny.

I was amazed that I had not heard of this plant before. Its name was Ascend Performance Materials – Ascend, as in going up up and awaaaaaaaaaaaaay.

Ascend is owned by a Houston-based private equity firm named SK Capital Partners that generates revenues of approximately $14 billion-with-a-B every year. In other words, they’ve got money to burn even as they burn the planet up.

But then I realized I did know this polluter. It’s from my old stomping grounds up in Escambia County, which is no surprise.

Escambia is a fine place, with gorgeous beaches and lots of hard-working people. Some of them are working on this side of the law and some on the other side.

Unfortunately, Escambia has a major downside: Lots of polluters call it home. There are so many, you could easily put on a game show there called “Name That Polluter!”

According to a 2017 story in the Pensacola News Journal, Escambia County ranks 11th among all of the U.S. counties for disposing of the most toxic waste. No other Florida county made the national list.

Escambia is the site of one of the worst Superfund sites in the nation, nicknamed “Mount Dioxin.” And there’s a paper mill that’s dumped so much of its waste into a local waterway that everyone calls it “Stink Creek.”

But even among that tough competition, Ascend stands out. The 2017 story noted: “Of the total releases in the county, chemical manufacturer Ascend Performance Materials … contributed the vast majority.”

Turns out Ascend is only the most recent name for the plant, which is the largest in the world for converting petroleum into nylon products for use in everything from carpet to cars.

Originally the Ascend facility, which sits on 2,000 acres by the Escambia River near where it flows into Escambia Bay, was known as Chemstrand. Then it became Monsanto, then Solutia.

Monsanto and Chemstrand  ̶  those are names I remember from childhood. I called up my parents, who still live in Pensacola. They told me that over the decades some of my own relatives had worked at Monsanto. It was a steady source of jobs for the community.

It was also a steady source of toxic waste, right from the start.

“The plant began operating in 1953, and almost immediately complaints about pollution were voiced,” a scathing 1999 grand jury report noted. The 120-page report focused on polluters who ruined the area’s natural bounty for their own gain and the regulators who routinely ignored and concealed violations.

Chemstrand’s owners professed ignorance of any toxic waste. It was the corporate version of that running “Family Circus” gag where the kids claim that everything that’s gone wrong is caused by “Not Me” and “Ida Know.”

But studies confirmed that Chemstrand was one of the principal sources of the pollution fouling Escambia Bay in the 1960s, the grand jury wrote.  Its discharges “led to the collapse of this estuarine system.”

The company had to stop dumping its waste in the water. Instead, it began injecting it underground, which brings a different set of problems. Meanwhile, there were problems with what was coming out of its smokestacks.

Linda Young, a longtime environmental activist in the Panhandle, told me she worked at the plant one summer before going to college. Her job: Gluing plastic daisies onto welcome mats.

“They gave us umbrellas for walking between where we worked and the cafeteria where we’d eat lunch,” she said. The employees needed umbrellas because residue from the plant’s smokestacks was “just falling through the air like snow, and it would burn your hair, your skin and your clothes.”

In 2019, the Pensacola News Journal checked back on what had happened to all the problems identified by the 1999 grand jury report. Twenty years later, things weren’t much better:

“EPA data shows the Pensacola area releases more toxins than almost anywhere else in America,” the paper noted. It’s as if the Chamber of Commerce were seriously trying to score the No. 1 spot, with a big assist from lax state and federal regulators.

Young told me about how, a decade before that report, the county’s utilities authority had sued the plant for tainting water supply wells with some nasty chemicals it had injected in the ground. However, a judge ruled that the water supply agency had failed to show that it had suffered harm (I guess the judge didn’t drink water).

Young said she petitioned the EPA to crack down on the plant and also test more of the utility’s wells, “but the EPA just looks away.”

More recently, in 2021, there were not one but two fires at the Ascend site, the second within five days of the first. When I asked a company spokesperson named Alison Jahn how that happened, the answer she gave me was, “Inclement weather.”

I should mention that Pensacola is one of the rainiest cities in the U.S.  I am not clear how that heavy rainfall could lead to a pair of industrial blazes, but I never got a better answer from Jahn. I guess only James “Fire and Rain” Taylor can explain that one.

Jahn spun me a pretty picture of the plant and its surroundings: “We employ nearly 1,500 people which amounts to over $100 million of salaries and taxes annually that are spent back in the community. … We’re heavily involved in the community through our active employee base who volunteer with our Ascend Cares Foundation.”

“Yes yes, very nice,” I muttered to myself while reading her emailed response. “But let’s get to the part about how you’re killing the Earth.”

Some people use laughing gas, aka nitrous oxide, as a casual party drug. In that context it has several nicknames: Hippie crack is my fave (because I’m old). You’ve probably heard of whippets.

Laughing gas was first synthesized by an English chemist named Joseph Priestly in 1772.  I like to picture him as a budding comic who found a shortcut to audience appeal, although that’s not in the history books.

Today, as Steve Martin showed us, it’s primarily used as an anesthetic by dentists  ̶  I mean used on their patients, not on themselves.

We’ve known since 1991 that the laughing gas produced during the nylon manufacturing process is a danger to the planet. It pushes us further along toward a far warmer world, with more intense hurricanes, rising sea levels, bigger storm surges, and more toxic algae blooms and mosquito-borne diseases.

As of 2020, the EPA says, it accounted for about 7% of all U.S. greenhouse gas emissions from human activities. In addition to being nearly 300 times worse than regular carbon emissions, nitrous oxide molecules stay in the atmosphere for an average of 114 years. That’s a loooong time, even for an oldster like me.

Laughing gas emissions are easy to get rid of before they leave the plant’s exhaust.

Most nylon plants around the globe, “alarmed by [its] potency as a greenhouse gas, joined forces almost 30 years ago and developed technologies to abate virtually all of their pollution,” Inside Climate News reported in 2020. They’ve been “using low cost incinerators and chemical reactors to destroy 95 percent or more of their nitrous oxide since the 1990s.”

But not Ascend! No, they do things the old-fashioned way. They’re just letting those emissions rip like a rude noise from a whoopie cushion. Ha ha! Isn’t that funny?

Apparently, that’s how you make billions in revenue: You reject spending money on low-cost equipment to fix your pollution problem. Think of the savings! Too bad about the planet.

Jahn told me that Ascend finally began working on its emissions problem in 2018. That’s more than a quarter-century after its competitors. I guess it took the company that long to figure out that maybe saving the Earth is a good investment, considering it’s where their employees live.

By 2020, company officials promised that they would “implement a process this year for reducing its nitrous oxide emissions by 50 percent.” They pledged that by February 2022, there would be “a “well over 95 percent” emissions reduction.

It appears they were just joking about that.

Instead, Inside Climate News reported earlier this year, emissions from Ascend’s Pensacola plant “increased by 50 percent in 2020, EPA data show. Air permits filed with state regulators in Florida do not indicate that the company is moving forward with more ambitious reductions of the potent greenhouse gas.”

Jahn told me this week that “we exited 2021 at an effective 50% reduction in site N2O emissions and expect further reductions in early 2023.”

She didn’t want to talk about how they’re doing it or what the delay was about. I picture the company officials being like Steve Martin’s dentist: unable to act because the laughing gas makes them too giddy. Meanwhile climate change keeps getting worse.

The delay in fixing their emissions problem isn’t hurting their owner’s profits, though. In fact, I think you could say they’re laughing all the way to the bank.