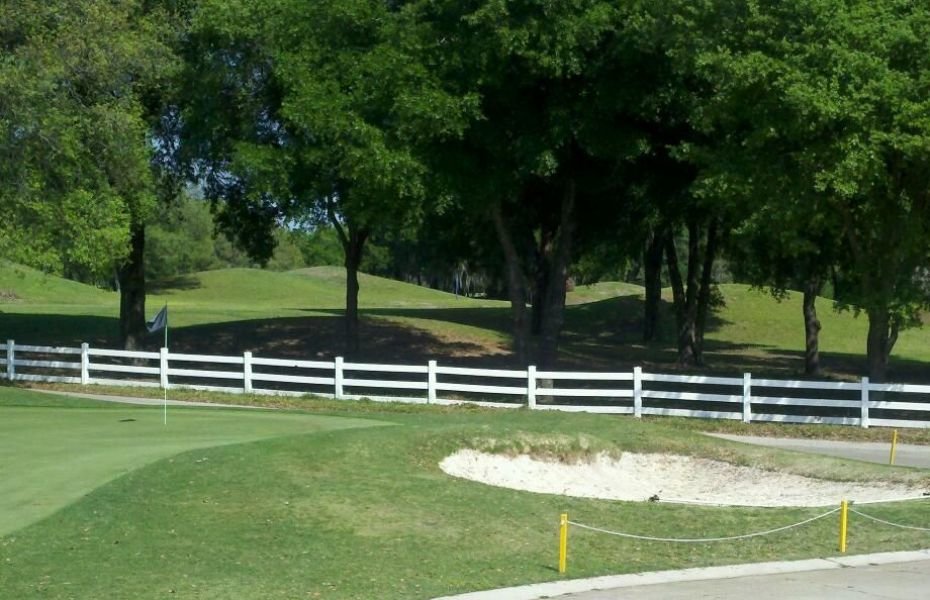 When it existed, the Rock Springs Ridge Golf Course gave golfers all they could handle. Depending on the 18 holes you played, it stretched out to over 7,100 yards from the back tees, had a course rating of over 74, and a slope rating of 133.

If you don't know what any of that means, take my word for it, that course could take you apart. I finished several rounds there feeling like a boxer who just faced Mike Tyson in the 80s.

RSR had a long par-three hole with a tree in the middle of the green (at least that's how I remember it). The signature finishing hole was guarded by a lake that allowed diners (or well-meaning hecklers) to watch players complete their rounds from the clubhouse porch.

It was a tough track usually in good shape, and one I would love to see returned to its prime. It's hard to drive through RSR without seeing the shadow of that course under the thick grass and weeds. I wish profit and loss margins were not a factor in determining which ones survive, and which ones end up as parcels to fight over in courtrooms. The Rock Springs Ridge Golf Course belongs in the sports section of an online news site, not the business section.

My apologies for the digression, but I simply cannot write this many words about a golf course without also describing its one-time splendor.

In the meantime, the never-ending saga of what will happen to the RSR Golf Course property moved back to City Hall Wednesday.

At the end of the May 5th City Council meeting, Apopka Mayor Bryan Nelson gave an update on how the RSR deal with owner Robert Dello Russo and the residents of RSR is advancing.

"We're meeting with (Orange County Supervisor of Elections) Bill Cowles to figure out how we get the vote for the residents [of RSR]. "There is mixed information in the statutes [as to how a consensus can be established]. We're getting Bill and his team to try and clean it up. There are different ways to vote, and they need to be a lot clearer than they are. We should have a price tomorrow for an election based on 1,320 homes.

I'd rather his office do that so there's no question as to the integrity of the election."

It was a little over a week ago that Nelson stood before 500 RSR residents at The Apopka Amphitheater, sounding enthusiastic about this deal.

“As you all know, I got elected three years ago,” he said. “And ever since then, we’ve been trying to set up an arrangement to get Dello Russo out of Rock Springs Ridge.”

But in front of the Council, a week later, his fervor to get a deal done seemed to be less passionate.

"You're entitled to say no for $2.4 million," Nelson said. "I've got no dog in that hunt. I'm fine with whatever you all decide."

Nelson also referenced a potential lender if the RSR Homeowners Association wanted to buy the course from the City, if it chooses to go in that direction.

"...We should also have some information from a bank if the HOA wanted to take a loan to buy the course instead of form a recreational district. There are pros and cons to that. The pro is a recreational district is a lot more structured, whereas an HOA is a lot more informal, and that's the question as to how the residents want to do it. You can get it done faster. There would probably be less attorney fees in an HOA buyout."

Commissioner Diane Velazquez, an RSR resident, was bombarded with questions following the meeting from her neighbors and others interested in how the deal with the City might be structured.

"They are concerned with the cleanup," she said. "The environmental state of the property. The maintenance costs. The trees have been neglected for so many years. The cost itself outside of what the property is going to be swapped for is the real concern. They know the cost of the land, but they don't understand the real cost of owning the golf course."

"We can talk to Dello Russo and find out what they are spending [on maintenance] - obviously not a lot. That's for sure," Nelson said. "The Tavern said, according to them, their rent pays for the maintenance of the property."

"We're just looking for clarity on the real cost of owning the golf course," said Velazquez.

"It just depends on what you decide to do with the property," said Nelson. "If you put a golf course in, that's one set of numbers. If you leave it very, very primitive, it's lesser numbers, and if it's somewhere in between where you've got walking paths, that would be somewhere in the middle."

He also expected to have more details the next time the City Council gets together on May 19th.

"By the next meeting, we can probably answer the questions as to who is paying for what."

Velazquez also asked Nelson about the evolution of this deal, and what other properties might have been offered or suggested.

"Who initiated this land swap? Whose idea was it?"

"The attorney for Dello Russo," Nelson said. "Or Chad, his partner."

Nelson asked City Attorney Michael A. Rodriguez for his recollection of how the deal transpired.

"They had several proposals and then they threw out a land swap," Rodriguez said. " Do you have any properties you could swap?"

I think we're putting the cart before the horse," said Commissioner Alexander H. Smith, also an RSR resident. "At what point does the HOA vote to even enter into this agreement?"

"A lot of this is hypothetical, but the residents can organize a petition drive," said Rodriguez. "And if a majority of the residents present the City Council with a petition then the process has begun."

"But we don't even know if they want to enter into this agreement," said Smith. "So when will that vote take place?"

"Let's just start from scratch here," said Commissioner Kyle Becker. "If you're saying that there could be a petition drive, and they just need the majority of ownership in their neighborhood to create this district... if you're saying that's the most basic way to do it, how is the City equipping or educating these people to put ink to paper? Yeah, the $2.5 million number is out there, but what are the details? What's the cost of maintenance? What's the current appraised value of the golf course? All of that people need to make an informed decision. How does that get out to RSR residents?"

"I would advise that it's going to have to fall on the RSR residents to take the lead to determine," Rodriguez said. "I know that about a year ago this board voted on creating an advisory committee for Errol Estate. An advisory committee to take a look at what it's going to entail to create a recreational district. But that onus is going to fall on the residents. But if there's not a consensus of residents to take ownership or to take the acquisition of the golf course, then we're back to square one."

"To everybody's point, this is not the kind of deal I would have made," said Nelson. "I would have rather the RSR residents figure out a price with Dello Russo and kept us out of this thing because obviously, it's not the way I want it."

Smith was also concerned about the price of the course, and if a bond or lender could be secured if the golf course did not appraise for the proposed sale amount.

"It's been said that no matter what the golf course appraises for, we could still get a bond for $2.4 million," he said. "Is that a fact? And then, if we choose not to do a bond and do a traditional bank loan, will the bank loan us $2.4 million for a golf course only worth $1.2 million?"

"They will?" Smith asked again.

"Yes," said Nelson. "I talked to a banker, and she said as long as the HOA puts certain things in its bylaws, then yes they can loan them the money."

Nelson would not disclose the name of the bank or the banker. He did, however, return to the theme of the RSR residents taking the lead on this deal.

"A lot of this is for the residents of RSR to do the due diligence. It's not up to the City to figure out the cost to maintain it. At some point, you have to figure out what you're going to do with it. The only question we're trying to answer today is 'do the RSR residents want us to buy it and pay back the $2.45 million value of the properties we're swapping?' Everything else is up to the residents. As soon as we get that done, it's theirs to take in whatever direction they choose. Rock Springs Ridge is obviously an important community, but I have to look out for the City. I have to protect the other 50,000 residents as well."