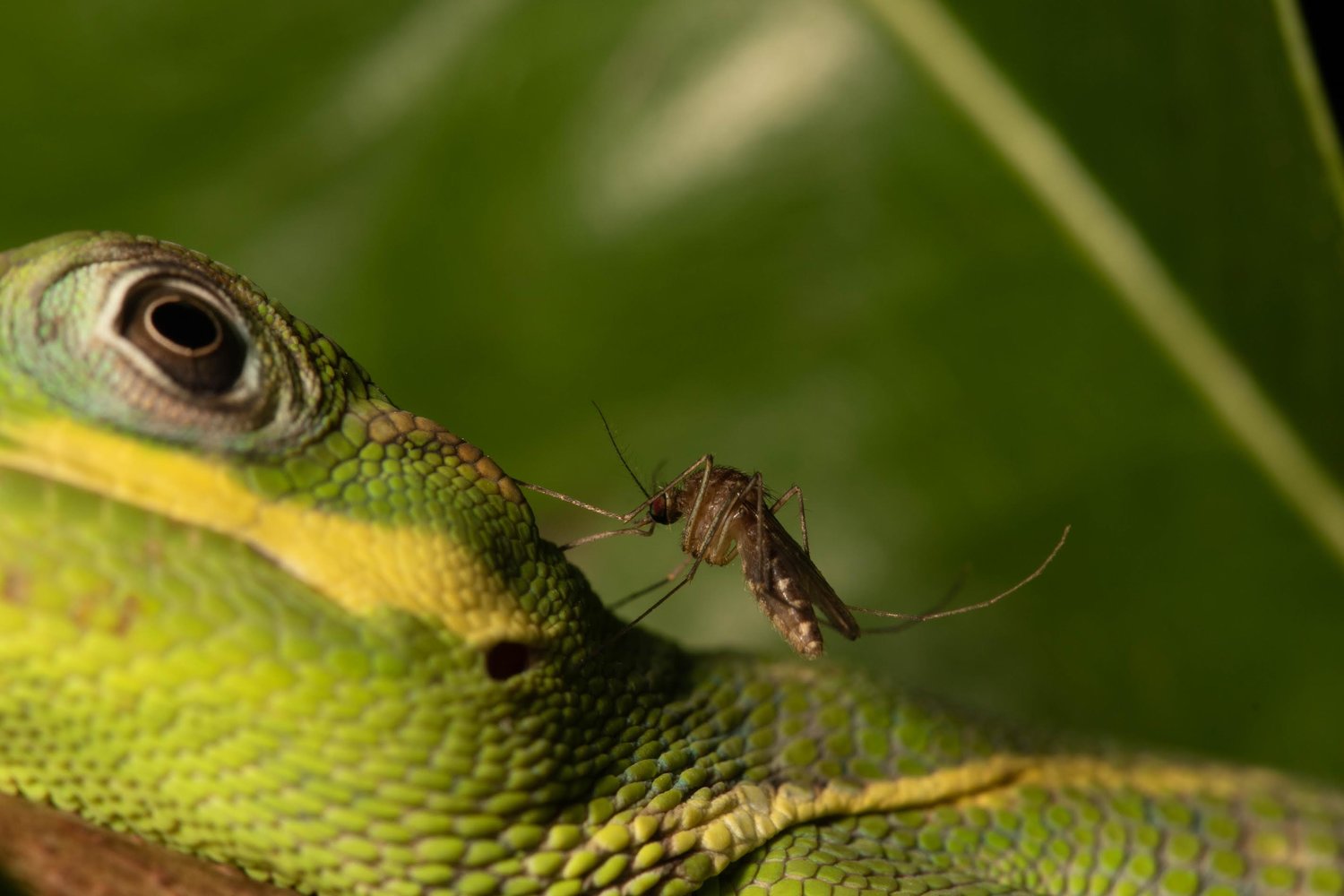 The key question that stems from our study is whether lizards can serve as hosts for these viruses. If not, if they are dead ends, it is possible that the presence of lizards, including some of these invasive species, has a beneficial effect by reducing the transmission of these viruses and the risk that humans will become infected.”
By Lourdes Mederos, UF/IFAS

A new study published in Frontiers by faculty at UF/IFAS Florida Medical Entomology Laboratory finds that Culex mosquitoes prefer to feed on lizards. This finding might help researchers find ways to reduce the number of West Nile-carrying mosquitoes within an ecosystem.

“We found that lizards, especially the nonnative brown anoles, are major hosts for some of the most important West Nile virus (WNV) and St. Louis encephalitis (SLEV) virus vectors in Florida,” said Lawrence Reeves, an assistant professor, and entomologist. “Then, in Arizona, we also found that lizards were major hosts for the western West Nile virus Culex vectors as well.”

Scientists previously thought Culex mosquitoes fed primarily on birds and mammals. Researchers believed that interaction facilitated the transmission of WNV among birds and the subsequent infections of humans and horses.

The new finding helps scientists understand how diseases spread by Culex mosquitoes expand in ecosystems and how they might reach humans and domesticated animals.

Mosquitoes bite a wide range of animals, and each mosquito species has distinct preferences for certain kinds of animals. Scientists call such animals “hosts.”

“The process of transmitting mosquito-borne diseases to humans and wildlife all comes down to which mosquitoes feed on which animals,” explained Reeves. “Only certain mosquito species can transmit viruses, and only certain animal species can become infected and pass on a virus to new mosquitoes.”

“We found that lizards, especially the nonnative brown anoles, are major hosts for some of the most important West Nile virus (WNV) and St. Louis …

Whether the lizards play a role in the transmission of these diseases spread by Culex mosquitoes is a key question that emerged from the study. It offers researchers, like Reeves, a new direction to explore.

“If lizards are poor hosts for these viruses, mosquito bites on lizards could translate to fewer West Nile virus-carrying mosquitoes flying around,” said Reeves.

The Culex mosquitoes that vector WNV and SLEV were previously understood to feed almost entirely on birds and mammals.  That understanding is based on large-scale studies done in the 1960s and 1970s, before the brown anole and other invasive lizards were widespread in Florida, explained Reeves.

Here is what they learned:

Vector mosquitoes feeding on lizards may reduce the transmission of these viruses if the lizards are poor hosts for the viruses.

“These insights are important because lizards might help reduce the transmission of WNV and SLEV - both viruses infect birds, and any time a human is infected by one of these viruses, that virus would have come from a vector mosquito that had previously fed on an infected bird,” said Reeves.

Culex mosquitoes, known to spread zoonotic Flaviviruses like WNV and SLEV, are a public health risk as they spread viruses among wild animals, and occasionally, from wild animals to humans, Reeves said.

Culex mosquitoes pick up these viruses when they feed on the blood of an infected bird. Then, when that mosquito goes on to feed on new animals, the virus can be transmitted when that mosquito takes blood from any subsequent host. If a bird becomes infected, any mosquitoes that feed on it while the infection is active may pick up the virus. On the other hand, some animals, like humans, represent dead ends for these viruses: if a human is infected with WNV or SLEV, mosquitoes that feed on that human will not pick up the virus.

“The key question that stems from our study is whether lizards can serve as hosts for these viruses,” he said. “If not, if they are dead ends, it is possible that the presence of lizards, including some of these invasive species, has a beneficial effect by reducing the transmission of these viruses and the risk that humans will become infected”

On the other hand, if lizards are dead-end hosts for WNV and SLEV, every mosquito bite that goes toward a lizard, rather than to a bird or human, is one less opportunity for WNV or SLEV to be transmitted.

“If that's the case, it may be possible to use lizards as a sort of biological control to help dampen the transmission of West Nile and other similar viruses,” said Reeves.