Scientific report warns of climate-induced extreme heat; ‘Florida is in the bullseye’ 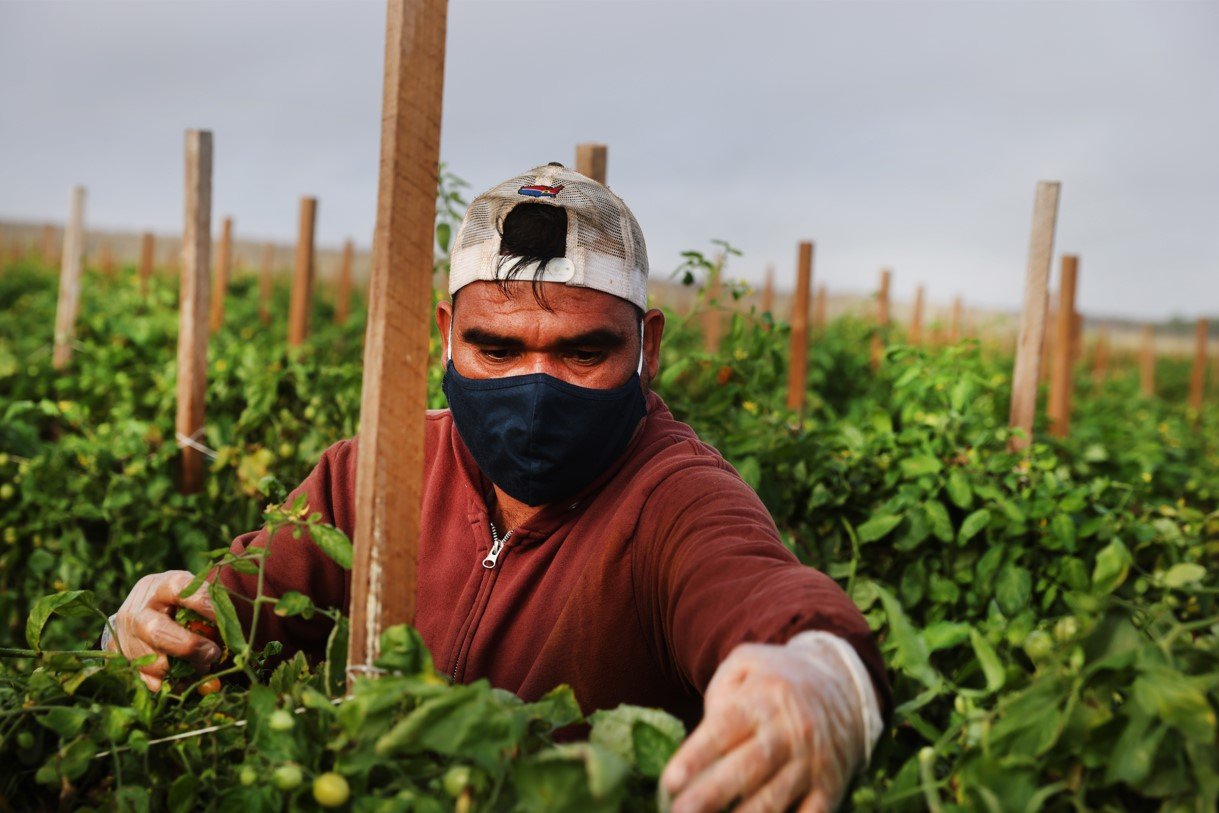 Outdoor workers will increasingly lose workdays and face greater health risks due to extreme heat, especially in construction and agriculture in the South, according to the Union of Concerned Scientists. Here, a worker in Immokalee, FL, harvests tomatoes for Pacific Tomato Growers/Sunripe Certified Brands, a member of the Fair Food Program to protect farm workers. Credit: Spencer Platt/Getty Images
Posted Monday, September 6, 2021 9:22 pm

Union of Concerned Scientists cites hazards to health and economy

As with Hurricane Michael in October 2018 and Hurricane Ida last week, climate change is stoking severe weather the likes of which the Gulf Coast has rarely seen before.

It starts with heat, which has reached record highs for the last seven years, scientists say.

And the heat will get worse, much worse, warns the Union of Concerned Scientists in a new climate-focused report titled “Too Hot To Work.”

The report released last month says 2 million outdoor workers in Florida, about one-fourth of the workforce, could lose more than $8 billion in annual earnings over the next four decades due to inability to work in increasingly dangerous heat. In densely populated south Florida, which is hot even on a mild day, outdoor workers will be hit the hardest. That represents estimated individual losses of $3,700 to $5,000 in lost annual wages, the report says.

Outdoor workers are most at risk from increasingly extreme heat in the areas in red. Source: Union of Concerned Scientists

Those workers include farm laborers who plant and harvest our food, utility workers who keep power and water running to homes and businesses, construction workers, and first responders. The Union of Concerned Scientists reports that workers have lost roughly five days of work per year to extreme heat historically but could lose up to 33 days in the foreseeable future.

And not only do they face loss of wages due to heat, but they are also 35 times more likely to die out there.

Dr. Cheryl Holder, a Miami-Dade internal-medicine physician and co-chair of Florida Clinicians for Climate Action, sees in her practice what heat is doing to Floridians who mostly work outdoors.

“What I see is the kidney effects. We can’t cool ourselves. It makes us incredibly vulnerable to dehydration,” Holder told the Phoenix. Dehydration can put deadly stress on kidney function, blood pressure, and heart function – dangerous conditions that don’t vanish with a drink of water, especially when the excessive heat is chronic.

Holder is one of many physicians and scientists trying to draw attention to climate change as a hazard for human health which, they say, cannot be avoided at this point but can be diminished in its future intensity.

It’s a message that’s hard to convey, because the damage done by excessive heat, while easily felt, especially in Florida and the Southeast, is not as plainly visible as the destruction left behind by monster hurricanes, massive wildfires, and rising sea levels that wash into whole Florida neighborhoods even on sunny days.

The new “Too Hot To Work” report and its predecessor “Killer Heat” from 2019 aim to make excessive heat fueled by climate change more tangible and to articulate, alongside the impact on ecosystems, the costs in terms of both human health and economic impact.

“Evidence suggests that, in addition to direct health impacts, increasingly extreme heat has already reduced global labor capacity, as it is more difficult to do the heavy work associated with industries such as agriculture and construction when it is extremely hot,” the “Killer Heat” report says. “Continued warming throughout the 21st century is projected to further reduce labor capacity and productivity. By the year 2100, estimates for the ‘no action’ scenario suggest that lost labor hours would represent more than $170 billion in lost wages.”

Kristina Dahl, the senior climate scientist at the Union of Concerned Scientists and a co-author of both reports, told the Phoenix the data analyzed by the UCS team indicates extreme heat days – defined as heat and humidity that creates “feels like” temperatures of 100 to 108 — will quadruple over the next three to four decades if dramatic changes are not made.

Dahl, Dr. Holder, and the scientists at UCS say policymakers must reduce greenhouse gas emissions as quickly as possible to slow the rapid heating of the planet caused by the increasingly dense blanket of gases surrounding it in the atmosphere.

“Florida is in the bullseye on all of this,” Dahl said. “Even with rapid action, there will be more rise in the heat.” Dahl, based in San Francisco, said conservative states such as Florida have not adopted clean-energy programs and may avoid taking action against extreme heat and other climate changes until compelled to do so at the federal level.

Meanwhile, Dahl and Holder said states, especially Southern states, must brace for more days of extreme heat that can be life-threatening for people who regularly work outdoors, have chronic health problems, and/or do not have access to cooled air. That includes families in substandard housing, who increasingly are vulnerable to COVID-19, utility cutoffs and evictions, and homeless people.

It also means higher power bills for people with air-conditioned homes and workplaces and a greater likelihood that those structures, too, will be without air cooling when power grids fail during increasingly frequent periods of peak demand.

And the heat could force people to curtail outdoor activities, which could impact Florida’s tourism industry too.

Strategies to mitigate the damages of climate change — such as armoring Florida coastal regions against sea-level rise — are necessary as the climate deteriorates, but they do nothing to address the cause, Dahl and Holder said.

They agree with the consensus findings of the World Meteorological Society that it is imperative to shut down the greenhouse gas emissions that are fueling the planet’s demise.

To date, the state government in Florida has adopted no statewide clean-energy policies and actually went in the opposite direction in the last legislative session by banning cities from phasing out fossil fuels (oil, gas, coal).

“We have to move away from fossil fuels,” Dr. Holder said. “History shows us we can overcome difficult things. My concern is not about getting out of this, surely we will come together to get out of this, but how many people are we going to sacrifice?”

Karen Woodall, executive director of the Florida Center for Fiscal and Economic Policy, has for decades been an advocate for farmworkers, lobbying for protection against exposure to pesticides, decent health care, decent housing, decent working conditions, and more. Woodall told the Phoenix that policymakers and the public must do more to safeguard at-risk workers on whom they rely, probably unknowingly.

”Workers who have labored outside for decades are experiencing increased temperatures and extreme heat exposure. Agriculture, construction, postal, roofers, road workers, even warehouse and nursery workers, anyone who is outside. Heat illness is a critical issue across the country but particularly in the Sunshine State,” Woodall said. “Now more than ever, greater enforcement of the fundamentals needed to prevent heat illness — water, rest, shade — is needed on the federal and state levels.”