Recycling rates could rise significantly with this simple tweak 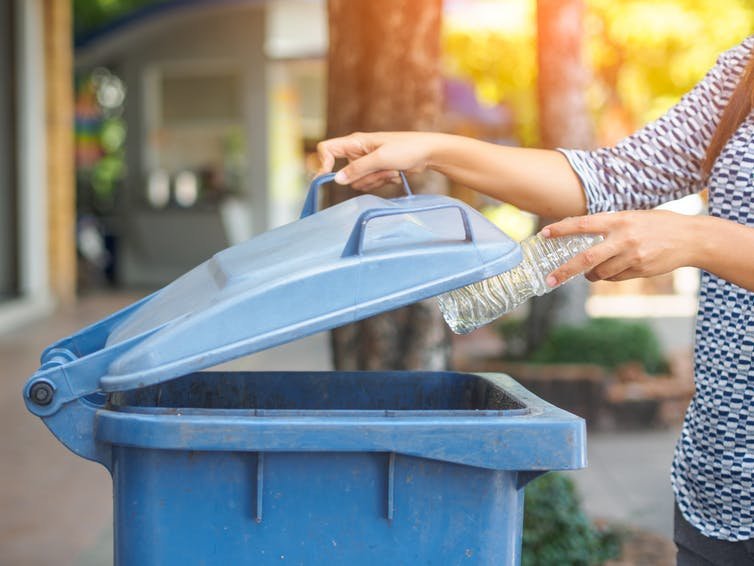 Have you ever thought about what happens to the empty Coke cans and food takeout containers you toss in your recycling bins?

Our research suggests that if you’re like most Americans, you’ve probably never considered this question. This was surprising to us given that, by definition, a recyclable is a product that has future use.

As consumer psychologists, we wondered if emphasizing this transformation in messages promoting recycling would better motivate people to put more of their empty cans, rigid plastic containers, and discarded papers into the blue bins.

About 75% of American waste is recyclable, yet just 30% of it is actually recycled. The figures are even worse with materials like plastic. Less than 10% of plastics disposed of in the U.S. in 2015 were recycled.

We noticed that most recycling messages tend to emphasize negative environmental outcomes from not recycling, such as “save the planet” and “conserve resources.” The problem with such messaging is that it may be perceived as coercive or induce guilt, which is partly responsible for the growing problem of “aspirational recycling,” or mixing non-recyclables in with your recycling.

So we conducted a series of studies to see if getting people to think about the products made out of recycled material could motivate them to actually recycle more and waste less.

For the first one, we recruited 111 Boston College students to participate in an “advertising study.” We asked participants to doodle on a piece of scratch paper to clear their minds for the survey. We then randomly showed them one of three ads. One was a generic public service message that showed paper going into recycling bins. The other two also depicted the paper either being transformed into new paper or a guitar.

After answering some survey questions about the ad they watched, participants were asked to clear their stations and dispose of the scratch paper on their way out. Those who viewed the generic PSA recycled about half the time. Those who saw the transformational messages were significantly more likely to recycle at a rate of about 80%.

We saw a similar recycling boost in a very similar study in which participants – 187 college students – doodled on scrap paper and then either watched ads for toys and phone cases that are made out of recycled plastic or ads emphasizing that the advertised products were made by a company that recycles plastic.

So for a third study, we wanted to understand more about what’s going on here. Why do transformational messages work better?

We showed 150 adults we recruited online one of three recycling advertisements: One depicted discarded plastic bottles being reborn as new bottles, another more generally described how recycling gives these materials a new life, and a third explained how recycling conserves resources.

We then measured the extent to which each message inspired participants to recycle more of their waste. We found that people felt significantly more inspired by the two transformational messages compared with the one emphasizing resource conservation.

Taking the message to the real world

To apply these ideas outside of the lab, we created an ad campaign to see how consumers responded to the different types of messages.

We also tested this kind of messaging during pre-football game tailgating at Pennsylvania State University.

Student volunteers welcomed tailgaters and shared one of two recycling messages with tailgaters. Half of the volunteers emphasized the transformation of recycled items into new products. The other half just told tailgaters what products they could recycle.

Volunteers recorded the locations of tailgaters they talked to via a GPS-enabled mobile app. After the game, the recycling and trash bags that tailgaters left behind were weighed. Those who received a transformation message recycled over half of their waste, while those who did not recycled less than a fifth.

Recyclables are not just another form of trash.

They are used every day to make all sorts of new products. More and more companies such as Nike, Timberland, and PepsiCo are incorporating post-consumer recycled material into their products and packaging.

We believe it’s not just governments and policymakers who should incorporate these transformation messages into their advertising campaigns but companies should as well. This would not only show consumers that they care about the environment but perhaps learning that their used plastic bottles may soon be on the soles of their latest Nike shoes would help motivate them to recycle more of their waste.

Emphasizing what people’s recyclable waste can become is a very simple messaging tweak, but our research shows it can make a big difference.