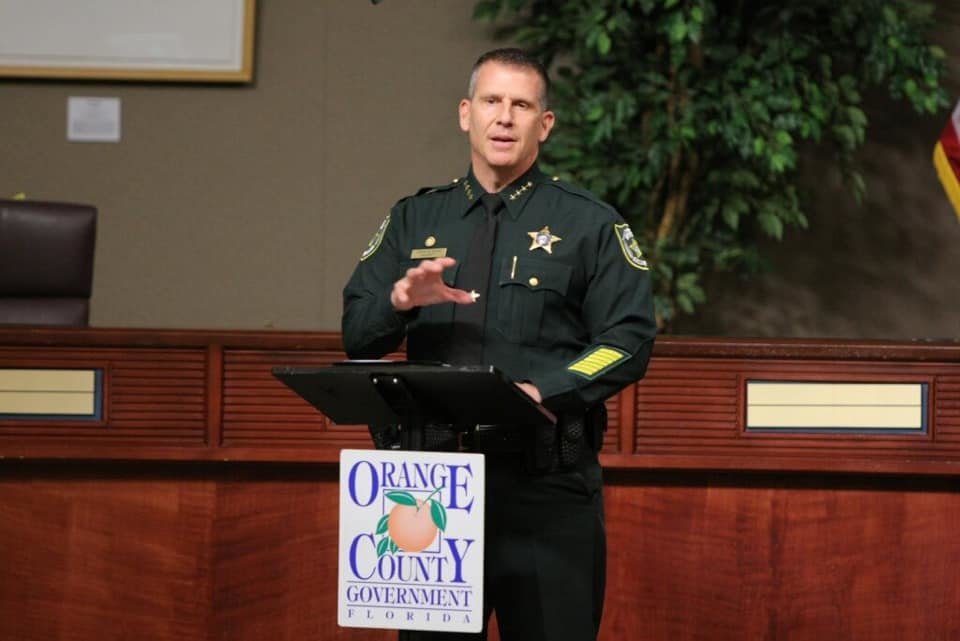 Who is John Mina? 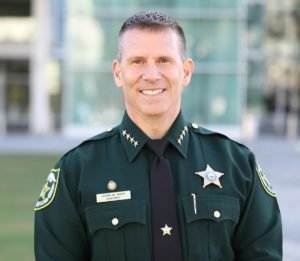 Sheriff John Mina has dedicated his life to public service. He began by serving his country as a Military Police Officer with the 82nd Airborne Division of the U.S. Army, and then spent nearly 28 years with the Orlando Police Department. Mina rose through the ranks and was appointed Chief of Police in 2014 where he commanded 1,000 sworn and civilian Orlando Police Department personnel and 100 volunteers for more than four years. In November 2018, Orange County voters chose Mina as the 29th elected Sheriff and it has been his honor to serve the community in this role.

Mina’s law enforcement career has been built on strong leadership by example and the ability to effect positive change. He is a trusted face of law enforcement in Central Florida, where crime has decreased, use of force is down and deputy accountability is the standard.

As Sheriff, his priorities are making Orange County an even better and safer place to live, work and visit, building greater connections and trust throughout the community, and ensuring deputies have the best training, equipment and technology available. In 2019, Sheriff Mina returned nearly $1.6 million to the Orange County general fund while overall crime countywide decreased.

Some of Mina’s accomplishments in the last two years are as follows:

Mina has lived in Orange County for nearly 30 years and cares deeply about this community, and it is why he is running for re-election. The issues that have been a priority to him are what he wants to continue in keeping Orange County safe and moving forward.

Protecting the Community - keeping Orange County safe by bringing state-of-the-art technology to the Sheriff’s office and promoting smart justice policies in our community.

Keep Crime Low - holding his commitment to protect the community and keep crime low by prioritizing the continued hiring of new staff as the population grows, working with municipal and legislative bodies on regional issues, and continue to provide deputies with the best training and technology to protect and serve Orange County

Accountability & Transparency – continue to enhance community trust through emphasis on accountability and transparency, and continued partnership with his nine-member Citizens Advisory Committee that studies agency policies and procedures and provides recommendations for constructive change

School Safety – keeping our children safe by continuing the assigning of school resource deputies to all traditional public schools within our jurisdiction, working with the Orange County School Board, and listening to the community regarding school safety concerns and priorities

Opiods - leading the fight against opioids by continuing to make sure all County deputies are equipped with Narcan, continually working with the community on innovative and holistic approaches to combat opioid use, assisting with opioid rehabilitation programs, and exploring doubling the amount of Narcan that the deputies carry

Juvenile Crime - Mina believes that youth don’t belong entrenched in the juvenile justice system based on one mistake and plans to continue having deputies use Juvenile Civil Citations in lieu of arrest. While this can’t be done for the more serious crimes, he believes they are a very effective tool in helping to keep kids out of the criminal justice system.

Community Engagement - Community involvement and engagement are vital, as seen through the programs implemented (see above accomplishments) and will continue under Mina’s leadership. He believes that forming relationships with residents is crucial to building trust between law enforcement and the community, and he will remain active in community events, hosting community barbecues and expanding community-oriented policing squads.

Diversity & Inclusion - regardless of an individual’s ethnicity, religion or gender identity, deputies will continue to be trained to treat everyone with respect and dignity; the Sheriff’s Office will continue to work with community groups, businesses, individuals and nonprofit organizations to help ensure Orange County is a place that accepts, respects and celebrates diversity; and they will continue the Safe Place Initiative

Mina is married to his wife, Tracie, and they have two adult sons, Chase and Nicholas.

If re-elected to this position, and if COVID-19 is still going strong, what would you do to make sure your vision for and effectiveness as a leader for and with the community stays on track and makes a difference?

"I will continue to lead by example and wear a mask, as well as have my deputies wear a mask. Additionally, we will assist by educating our residents and visitors with all of the executive orders issued by the Mayor regarding social distancing and the wearing of masks. We will continue to assist with testing sites and food distribution sites."

"I have increased my use of social media as well as participating in several Zoom meetings. I have also participated in four virtual candidate forums and have another three scheduled. I put out a weekly email regarding my campaign to keep voters interested and updated. I have also released numerous endorsements over the past several weeks."

"The highlight has been being the incumbent and having good name recognition."

"The biggest challenge we face is keeping up with the growth of Orange County and hiring more deputies as some call for the “defunding of the police.”

What is your #1 hope for Orange County that you would love to make a reality if re-elected?

"To continue to reduce and prevent crime. Crime is down this year in Orange County by 19% and violent crime is down by 12%. I would like to see those numbers continue to decrease and keep our residents and visitors safe."

"I am the only candidate who has been the Chief Executive of the two largest law enforcement agencies in Central Florida. And, the only candidate who has the experience to lead 2500 employees and run an agency that has a 280 million dollar budget. I’m endorsed by all three of our U.S. Congressional Representatives (Val Demings, Stephanie Murphy, Darren Soto), as well as 11 local Mayors to include Mayor Dyer and Mayor Demings. I am a graduate of the FBI National Academy and have 30 years of law enforcement experience. I also served my Country in the U.S. Army and have been a resident of Orange County for 30 years. I have spoken before U.S. Congress and the White House on police related issues. I’m the trusted face of law enforcement in Central Florida and have helped lead this community through crisis."