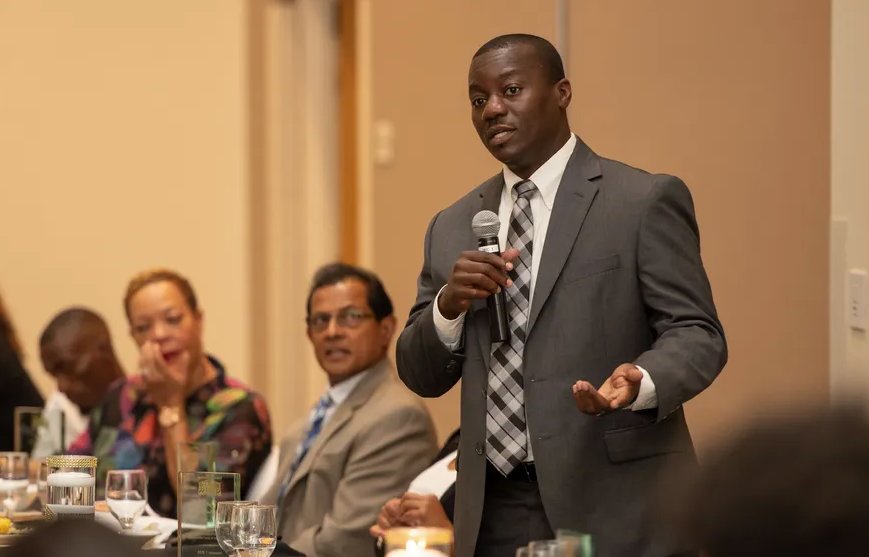 Who is Eric L. McIntyre?

A native of Central Florida, Eric McIntyre grew up in the inner city of Downtown Orlando and knows what it is like to persevere and overcome socioeconomic challenges. He is a determined leader, driven to help others succeed. He has lived, worked, attended local schools, and raised his children here, and for over 35 years has been committed to public service as a volunteer, mentor, a sworn Law Enforcement Officer, Police Chief, and advocate, working tirelessly in neighborhoods to keep the community safe.

McIntyre graduated with a Bachelor of Arts degree in Criminal Justice Administration, with honors, from Columbia College-Orlando. In 1991 he received his Associates of Science degree in Paralegal Studies, an American Bar Association approved degree, from Southern College-Orlando. Four years later, McIntyre became a Certified Law Enforcement Officer and began working in one of Orange County’s toughest neighborhood as a Patrol Deputy. Thrown right into protecting his community from the intense mix of gangs, prostitution, street-level drugs, robberies, shootings and violent crimes gave McIntyre a unique experience and view of what kind of leadership counts when dealing with the harshest of realities.

Propelled to continue learning and growing, McIntyre gained more hands-on experience and training at the Eatonville Police Department, excelling in the following areas:

At administrative hearings, McIntyre has represented firefighters, school board employees and law enforcement officers, representing both the rights of government as well as career service employees. His business acumen and skills as an entrepreneur and business owner, as well as wealth of law enforcement knowledge and experience, and administrative leadership abilities have routinely aided in his service advocating for the rights of all people.

One of his favorite quotes from Dr. Martin Luther King, "Injustice anywhere is a threat to justice everywhere", is one McIntyre lives and breathes as a guide in his life and service to his community.

While law enforcement has been his mainstay, McIntyre has found time to serve the community in other ways as well, including but not limited to: serving as the Vice Chairman and Secretary of the Police Municipal Pension Trust Fund Board, representing Eatonville Police; Board Member of the Local Community Advisory Committee for the Neighborhood Center for Families; a volunteer and mentor with Orange County Public Schools; an Agency Liaison with Valencia College Criminal Justice Institute Advisory Board; as well as past Chairman, Vice Chair and Member of the Criminal Nuisance Abatement Board for the City of Orlando, and a previous volunteer and Intake / Outreach Interviewer with the Legal Aid Society, Orange County Bar Association (1990-1995).

McIntyre’s leadership capacities as a professional in law enforcement and as a community leader has earned him awards, including being the recipient of Valencia Community College’s prestigious Bridges to Success Award in 2019 for his commitment to the community.

This blend of law enforcement experience and heart for serving and protecting the community is seen in McIntyre’s campaign slogan, Your Community Your Voice and focuses on uniting the community through the shared goals of:

McIntyre is surrounded by his supportive spouse, Carol, and a “joyous family of six children” (four who are now adults and two currently in high school), who participate in everything from attending law school, working hard, playing football, basketball, running track, dancing, and gymnastics. McIntyre makes note that his family is a “Christian oriented family with local ties within the community”. Uniting Orange County, for McIntyre, starts from the inside out - family, community, county - and he hopes he will be able to continue that work further as Sheriff.

"If COVID-19 is still going strong when I’m elected, the plans of reducing crimes such as homicides and other violent crimes will be a priority, together with providing protections for domestic violence victims, the elderly, and our children. I would continue in my vision, mission and goal in monitoring crime trends and implementing strategies to reduce crime and prevent crimes or criminal acts from occurring. Additionally, I would continue to move forward with my Community Policing Plan, which will allow for deputies to interact in the community, get to know the people, and allow for people to know them. Creating programs and activities for children is an all-encompassing goal that comes with community policing.

The short answer is crime and criminal activity, such as homicides and violent crimes against people, is and will continue to happen regardless of weather or a pandemic. Therefore the goal of keeping the public safe will be an ongoing process, which will be done cautiously so that everyone would be safe, citizens and deputies."

"In the beginning the basic steps were being taken, such as scheduling fundraisers, meet and greets, and gathering petitions, which was part of a grass roots campaign to inform the voters of who I am and what I stand for. However, when the social distancing mandates of COVID-19 were put in place, events had to be cancelled, and the grass roots petition drive was drastically minimized, which made meeting and informing voters of who I am, and of my platform, difficult. The unique things I have done have been using social media as a tool to allow for people to engage in conversation, and visit my website www.VoteforEric2020.com, where they would be able to learn about my leadership background, as well as the fact that I am a real person who has volunteered and mentored in the community, not a politician. Additionally, I relied on friends, and friends of friends to tell others about me."

"A highlight during my experience running for the position of Orange County Sheriff is community engagement, and the positive feedback of registered voters and citizens who express their enthusiasm that I am running for the position of sheriff. Another highlight is when an undecided voter emailed me and asked about my platform and what I stand for, and when I responded about protecting victims of domestic violence, and protecting the elderly and children, they began to tell their story of having been a victim, and responded that they would vote for me."

What do you see as the greatest challenge facing the Orange County Sheriff Office?

"The greatest challenge facing the Office of Orange County Sheriff is competitive pay for deputies who patrol more territory than a local officer, increasing morale with the Sheriff’s Office, and restoring trust between the community and law enforcement. However, with a positive mindset and a plan in place, the challenges will be easy to resolve and will transition smoothly."

"I want voters to visit my website: www.VoteforEric2020.com and learn about how well-rounded and down to earth of a leader and person I am, and to feel free to contact me via email or by phone to receive a direct response. I would like to say to the voters that, of the other candidates running for this position, I am the only candidate with law enforcement experience who has worked continuously with people in communities. I have volunteered, mentored, am a life-long resident of Orange County, and attended local schools. My campaign slogan is Your Community Your Voice, which means that your voice will be heard about the concerns within your community. Lastly, the voters should know that my platform is Making for a United Orange County, fighting for domestic violence victims, advocating for the elderly and children, making for safe neighborhoods, restoring the trust in the community, fighting to reduce drug use and abuse of prescription medications through rehabilitation, as well as advocating for the homeless, and being transparent within the Sheriff’s Department. Vote for Eric McIntyre on August 18, or early vote to avoid long lines."

McIntyre shared the following in regard to endorsements, that he "has received endorsements from voters, citizens, pastors, friends and a notable media outlet, Otownfun.com. Candidate McIntyre recognizes that voters are the true endorsers at the polls, such as the people in the Apopka Community and other west Orange County communities, that have undoubtedly been overrun by homicides and serious violent crimes. Although endorsements would be nice, endorsements should be unconditional. As a candidate, I want the people of Orange County to know that "It's Your Community and Your Voice" that counts. I aim to reduce crime, and the fear of crime, and make for a safer, united Orange County. I want people to realize that this August election is important and urge them to get out and vote."