On This Day: Professional football is born 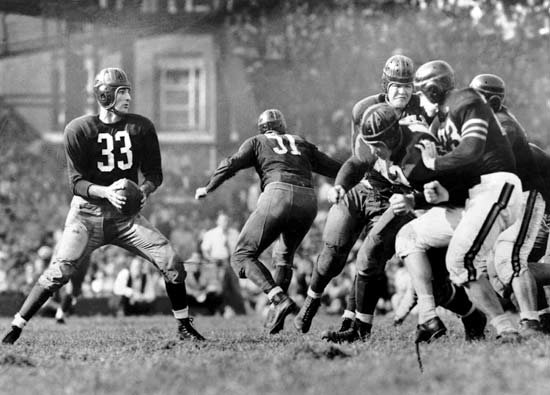 From The History ChannelOn this day in 1920, seven men, including legendary all-around athlete and football star Jim Thorpe, meet to organize a professional football league at the Jordan and Hupmobile Auto Showroom in Canton, Ohio. The meeting led to the creation of the American Professional Football Conference (APFC), the forerunner to the hugely successful National Football League.

Professional football developed in the 1890s in Pennsylvania, as local athletic clubs engaged in increasingly intense competition. Former Yale football star William “Pudge” Heffelfinger became the first-ever professional football player when he was hired by the Allegheny Athletic Association to play in a game against their rival the Pittsburgh Athletic Club in November 1892. By 1896, the Allegheny Athletic Association was made up entirely of paid players, making it the sport’s first-ever professional team. As football became more and more popular, local semi-pro and pro teams were organized across the country.

Professional football first proved itself a viable spectator sport in the 1910s with the establishment of The Ohio League. Canton, the premiere team in the league, featured legendary decathlete and football star Jim Thorpe. From his play with the Carlisle School to his gold medal in the decathlon in Stockholm in 1912 and his time in the outfield with John McGraw’s New York Giants, Thorpe was an international star who brought legitimacy to professional football. The crowds that Thorpe and the Canton team drew created a market for professional football in Ohio and beyond. Still, the league was struggling due to escalating player salaries, a reliance on college players who then had to forfeit their college eligibility and a general lack of organization.

On August 20, 1920, the owners of four Ohio League teams–the Akron Pros, Canton Bulldogs, Cleveland Indians and Dayton Triangles–met to form a new professional league. Jim Thorpe was nominated as president of the new league, as it was hoped Thorpe’s fame would help the league to be taken seriously. On September 17, the league met again, changing its short-lived name to the American Professional Football Association (APFA) and officially electing Jim Thorpe as the league’s first president.

The APFA began play on September 26, with the Rock Island Independents of Illinois defeating a team from outside the league, the St. Paul Ideals, 48-0. A week later, Dayton beat Columbus 14-0 in the first game between two teams from the APFA, the forerunner of the modern NFL.