On this day in history: Pearl Harbor bombed 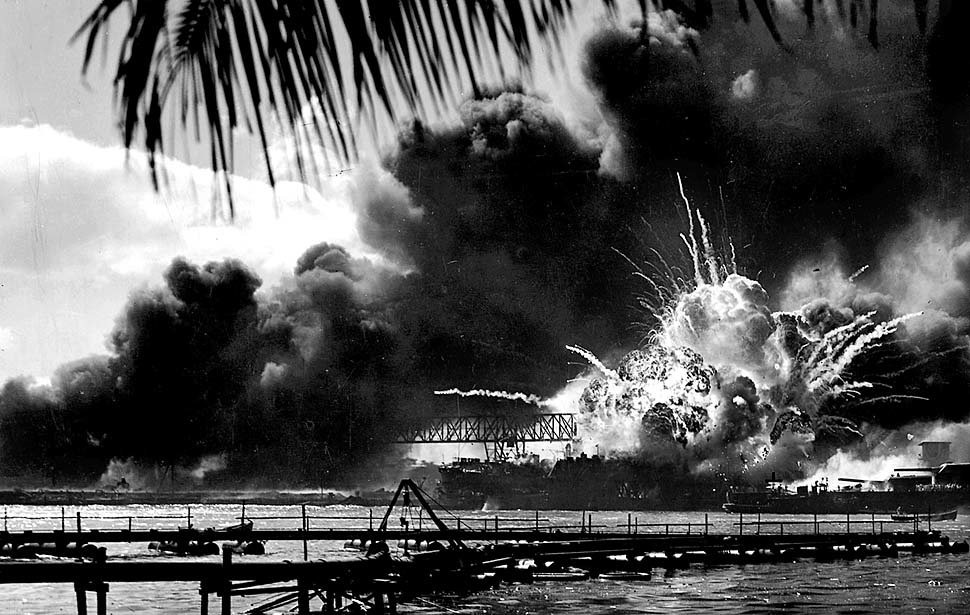 PEARL HARBOR,HAWAII: The USS Shaw exploded after being struck during the attack on Pearl Harbor December 7, 1941.
Posted Wednesday, December 6, 2017 10:37 pm

From history.comAt 7:55 a.m. Hawaii time, a Japanese dive bomber bearing the red symbol of the Rising Sun of Japan on its wings appears out of the clouds above the island of Oahu. A swarm of 360 Japanese warplanes followed, descending on the U.S. naval base at Pearl Harbor in a ferocious assault. The surprise attack struck a critical blow against the U.S. Pacific fleet and drew the United States irrevocably into World War II.

With diplomatic negotiations with Japan breaking down, President Franklin D. Roosevelt and his advisers knew that an imminent Japanese attack was probable, but nothing had been done to increase security at the important naval base at Pearl Harbor. It was Sunday morning, and many military personnel had been given passes to attend religious services off base. At 7:02 a.m., two radar operators spotted large groups of aircraft in flight toward the island from the north, but, with a flight of B-17s expected from the United States at the time, they were told to sound no alarm. Thus, the Japanese air assault came as a devastating surprise to the naval base.

Much of the Pacific fleet was rendered useless: Five of eight battleships, three destroyers, and seven other ships were sunk or severely damaged, and more than 200 aircraft were destroyed. A total of 2,400 Americans were killed and 1,200 were wounded, many while valiantly attempting to repulse the attack. Japan’s losses were some 30 planes, five midget submarines, and fewer than 100 men. Fortunately for the United States, all three Pacific fleet carriers were out at sea on training maneuvers. These giant aircraft carriers would have their revenge against Japan six months later at the Battle of Midway, reversing the tide against the previously invincible Japanese navy in a spectacular victory.

The day after Pearl Harbor was bombed, President Roosevelt appeared before a joint session of Congress and declared, “Yesterday, December 7, 1941–a date which will live in infamy–the United States of America was suddenly and deliberately attacked by naval and air forces of the Empire of Japan.” After a brief and forceful speech, he asked Congress to approve a resolution recognizing the state of war between the United States and Japan. The Senate voted for war against Japan by 82 to 0, and the House of Representatives approved the resolution by a vote of 388 to 1. The sole dissenter was Representative Jeannette Rankin of Montana, a devout pacifist who had also cast a dissenting vote against the U.S. entrance into World War I. Three days later, Germany and Italy declared war against the United States, and the U.S. government responded in kind.