MLK: Protest with resolve, and without violence 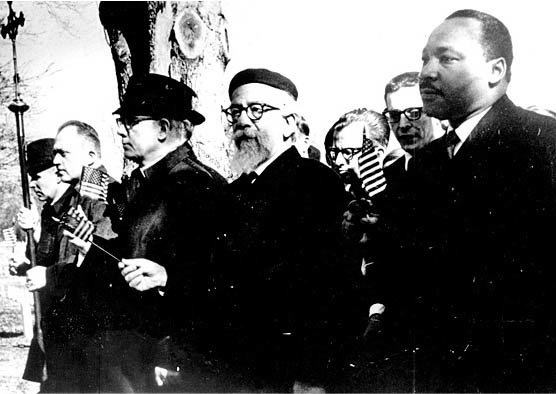 In 1965, Martin Luther King, Jr., and Abraham Joshua Heschel walked side-by-side from Selma to Montgomery in protest of segregation and voter suppression. Photo from the Library of Congress.
Posted Saturday, January 16, 2021 7:59 pm

We began 2021 with the bright promise of COViD-19 vaccinations that will allow us back together, then we were immediately enveloped by the darkening shadow of right-wing white supremacy pulling us apart. Some of us felt thrown back into the divisive disharmony of the 1960s.

In this time of less-than-smooth political transition, we are uplifted and inspired by the examples of two spiritual heroes with January birthdays: Martin Luther King, Jr. (January 15), and Abraham Joshua Heschel (January 11). MLK weekend is a potent reminder to our country that we have not forfeited our vision of American democracy.

In 1965, Martin Luther King, Jr., and Abraham Joshua Heschel walked side-by-side from Selma to Montgomery in protest of segregation and voter suppression. Dr. King and Rabbi Heschel declared in both voice and action that it is important not only to protest against evil but to be seen protesting with resolve, without violence.

The Rabbinic Sages supported the concept of visible protesting, even when no one seems to be listening. They debated the merit of a Jew attending gladiator games in the Roman amphitheater. Some Sages posited that one’s attendance might be seen as condoning cruelty and execution as a spectator sport. Rabbi Nathan objected: One should attend because her single voice might be enough to awaken the conscience of those around her, and because of her single voice she might influence the Emperor to spare the slave’s life. It is a matter of Torah to speak out, not “to stand idly by” immoral action.

Biblical prophets were not fortune-tellers: each was a singular voice of conscience speaking out against evil and offering a vision of the repaired world. Even as the Babylonians destroyed Jerusalem and exiled the devastated Jewish community, each prophet offered words of tikva, hope.

Rabbi Jonathan Sacks offers a distinction between optimism and hope. Optimism, he teaches, is the belief that things are going to get better. Hope is the belief that if we work hard enough together, we can make things better. It takes courage to harbor hope, even when optimism is not immediately in sight.

This weekend we celebrate Dr. King’s voice of conscience, charging us to find effective ways to speak up and speak out as did the prophets. Rabbi Heschel adds his voice, charging us to stand up and speak out even in the face of the gladiator games mob. With profound hope, Abraham Joshua Heschel and Martin Luther King, Jr., reached across their respective communities to talk together, walk together, and jointly awaken the conscience of America. We must remember their conviction: What we need is more important than what I want.

May we be inspired by their examples – separately and together – to bring our country together with hope… perhaps even optimism.

Rabbi Rick Sherwin, a graduate of UCLA, was ordained by the Jewish Theological Seminary in New York, and currently lives and serves in Central Florida. Rabbi Rick’s passion is filling spiritual services and interfaith educational programs with creativity, relevance, dialogue, and humor.