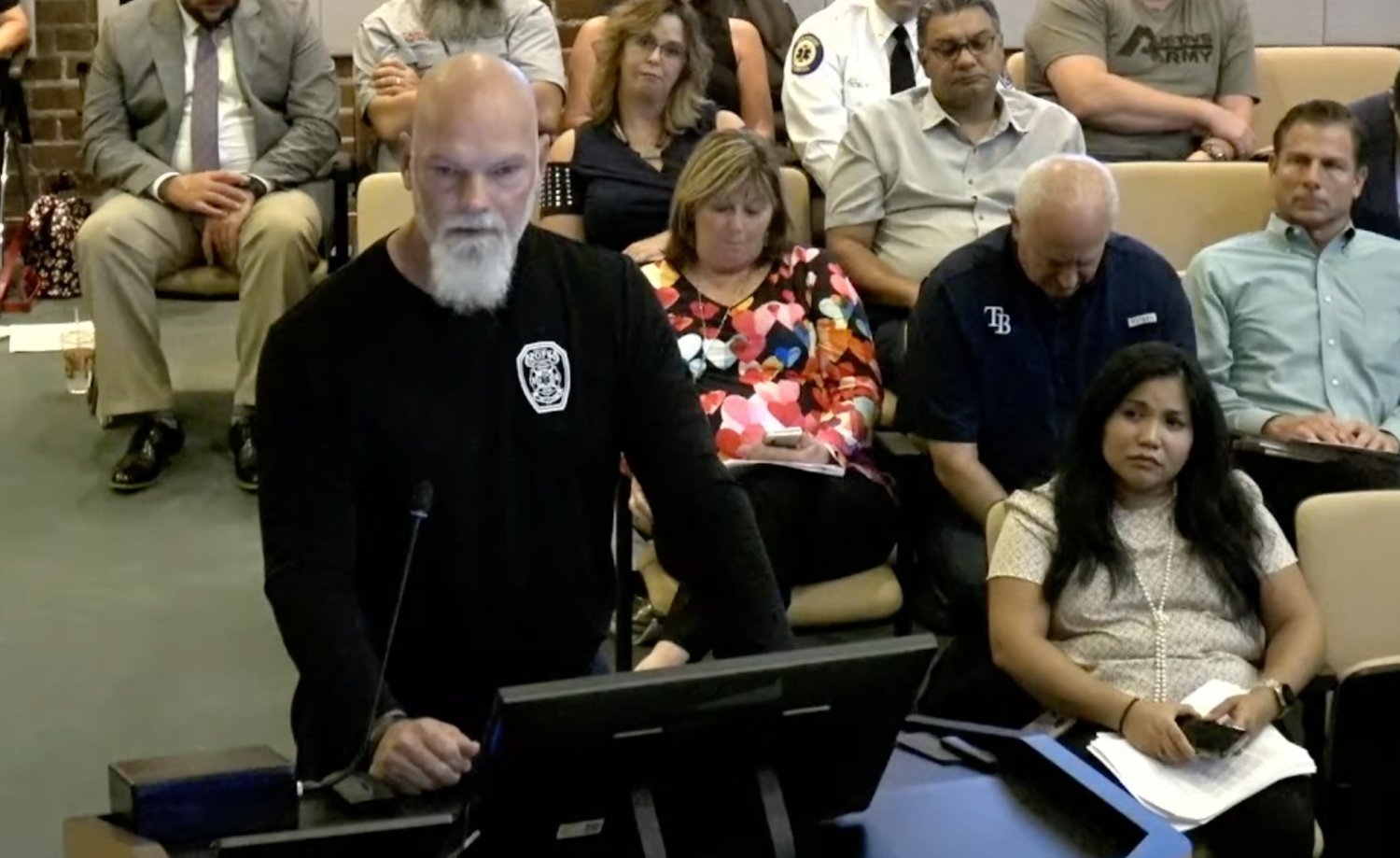 Michael Duran is on a mission. The father of deceased firefighter Austin Duran is emphatic about the urgency that is needed to bring the Apopka Fire Department up to proper safety, training and staffing standards.

"This [Austin's death] is the result of NOT properly funding the AFD," Duran said on social media on Tuesday. "I encourage the residents of Apopka to remind your city leaders how important life is for our AFD and to all they serve. We do not and can not afford under-trained, under-staffed personnel to be ill-equipped to serve our city. My son lost his life in direct connection to a lack of training, safety, and supervision. Who is next? Who will be the next firefighter, or will it be a resident? When will City leadership step up and rebuild a department that can be a model department that refuses the idea of losing the life of their personnel? I have asked. And Austin says NOW."

Here is his statement to the Council:

"To those that may not know, my name is Mike Duran. I am the father of Austin Duran.

Austin grew his passion for firefighting when he joined the explorer's program in 10th grade. He didn't want to be ANY firefighter, he wanted to be an APOPKA firefighter -specifically at station 1.

Once Austin achieved his dream, he gave it his all.

If you ask anyone, Austin was such a kind, gentle person. He had such an optimistic view on the world… always had a smile on his face, and positive ideas to share.

Little did he know… all the corrections that needed to be made within the department would be the reason his life was taken.

As you all are aware, Austin's life was taken by hooking up a piece of equipment neither he nor his partner were trained on,… no safety protocols, and no supervision.

I think we can all agree that the fractures of a department that is employed to protect property and lives ….exist within our own foundation. If we are not capable of protecting our own, how can the citizens feel confident that we are equipped to protect them?

How many lives need to be lost for us to realize that we need to properly train and staff our departments? When do we ensure that young firefighters are being sent to calls have more experienced personnel with them? How can we be confident all the personnel who fight this fight return home at the end of their shift?

Due to a lack culture in the fire department, firefighters are coming to me for support and in this short time I have been involved I can already see what the Apopka Fire Department needs:

If you still don’t think change and  action needs to be on a grand scale, and swift, maybe this letter from one of your own will convey in part what is needed:

"When walking into shift for the first time, I was nervous like any first day at a new job. I got there at 7:40… Apparently I was late… No one told me to make sure I got there at 7:30 at the latest.

No one told me that we should bring our own lunch... and maybe dinner.

The only thing I brought to the station my first day was a department issued T-shirt, pants and boots.

I also bought some donuts and coffee for everyone on shift. But, I didn’t even bring bedding …or a change of clothes. I showed up basically empty handed. Granted, I started my career during the COVID pandemic and me and the other rookies were not given an orientation like most of the other new hires.

When walking in I was overwhelmed by all of the people. People wearing red shirts or people wearing navy shirts ..or white shirts. I didn’t know the difference until I started shaking hands and introducing myself that the people in red were my lieutenants and people in white where the chiefs.

Since I was an explorer throughout high school, I only knew one person on my shift named Josh Roell. Josh remembered me… and helped me get to know the people on my shift, and how everything works. Josh was a great person to help me get to know my job, and what to do.

In the morning he helped me clean, sweep, take out the trash and make coffee. He got me a locker for my gear and upstairs for my clothes

But for some reason the next shift, the locker we picked for me was not mine anymore. My name was off of it, and someone else's name was there. I took my gear home everyday since I didn’t have a place to store it, and everyday I had a backpack of clothes that I would take every shift.

For me and the other four rookies that got hired we were given a Phase One book and told we needed to read it, and know everything in it. There were certain things that needed to be checked off in order for your Phase One book to be completed. For a new hire who is already nervous this was a lot.

It wasn’t until a few weeks later I met Phil Faro.

Phil saw me every shift in the ambulance trying to remember where everything was. He was the only person at the time that asked me if I needed help. He told me his way of remembering things and how the back of the ambulance broke down... from airway, to advance airway …to trauma.

Phil also helped me get signed off on the ambulance by running a mach code and testing me of what to do and how to be more efficient and confident. If it wasn’t for Phil helping me and getting everything signed off and done, I don’t think I would be as confident as an EMT as I am now.

Phil was a great mentor even though he wasn’t my mentor.

I’m not saying Phil was the only one that helped me out. Everyone on the shift helped, but it was certain things. Certain people just showed me the engine or how to work the cascade system. Some people would brush me off and tell me to ask someone else.

No one but Phil and a few others helped me step by step multiple times a week... for months. Phil and a few others would always ask me if I needed help... or if I had any questions that they could help with, and even if they didn’t know the answer they would find it for me and get back to me.

I think that this department needs some sort of mentor program. A person or two on each shift that is willing to help the new guy with anything ..and everything.   Someone who the rookie could go to with questions ..and not get criticized for not knowing something.

For an example, I felt comfortable coming to Phil and asking him to go over the inside of the ambulance with me, even though he’s gone through it multiple times.

The mentor program could help with rookies like myself know how to work the monitor and what’s expected of me  on each call.

They could even go over stuff I haven’t seen before like an LMA.

Before working at the fire station I had no clue what an LMA was or that I could even put one in as an EMT.

The mentor program would make rookies feel like they have someone they can trust …their very first shift on the job. The rookies would have nothing to fear if they had questions.

Honestly speaking, I was scared to ask some people questions about how to work certain things or where something was because I was afraid of the response I was going to get ..from the senior firefighters.

Should I be scared to ask if I don’t know something? Probably not. But as a rookie, nervous as ever… I was.

I think Apopka would benefit from a program like this for many reasons. One of the most important reasons is that they have someone they can talk to one on one.

If they needed to know where something is or if they had a bad call and they just need someone they can talk to.

Ten months into Austins career, he realized these faults. He realized through personal experience that a mentorship program was needed.

I don’t work nor live in Apopka. Austin did. I did not  even know who the Mayor of Apopka was prior to July 15th.

I ask the citizens of Apopka and I ask the City leadership that promises to keep the city safe.

When will we make the Apopka Fire Department safe for all who works there?

WHEN do we rebuild a department that not only us, but our own fire fighters, EMT’S and paramedics can be proud?

No one can go back and reverse this tragedy. We now have to move forward and prevent such occurrences.

So ask yourself, how many more lives have to be lost before we make real changes.

If you ask me …. One is too many. And if he could, Austin Duran would agree."