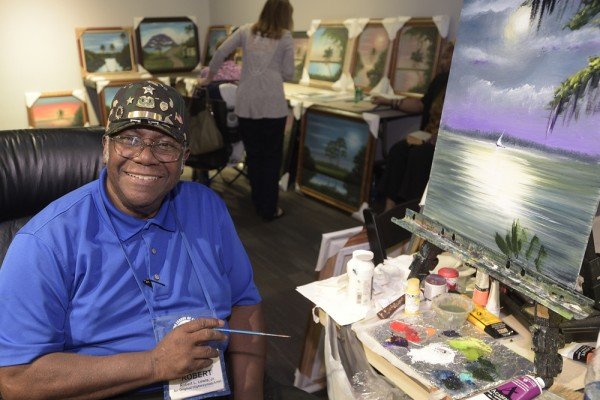 A group of 26 African Americans found success as artists in the segregated South of the 1950s. Meet some of these remarkable artists and hear their stories.
Posted Saturday, December 5, 2020 9:53 pm

From Staff Reports and the Orange County Regional History Center

The Highwaymen represent a fascinating chapter in Florida’s past — the story of 26 African American artists who took to the state’s roads in the 1950s and 1960s, marketing their landscapes. They came of age during an era of strict segregation, when their usual job options were extremely limited. Instead, they became working painters who are now in the Florida Artists Hall of Fame.

Now visitors will have a chance to meet some of these remarkable artists and hear their inspiring true stories, have the opportunity to appreciate and even purchase pieces, and be richly informed and inspired.

Museum admission is free for the day. Capacity will be limited in the exhibit hall to encourage social distancing and face masks are required in the History Center at all times.

The History Center is located in the restored 1927 courthouse at Magnolia Avenue and Central Boulevard in the heart of downtown Orlando. Parking is available in the Library Parking Garage at 112 E. Central Blvd. across from the Orlando Public Library. Get directions and a map.

The Highwaymen true story and film

The Highwaymen is a powerful true story of how a group of young African Americans triumphed over discrimination in segregated 1960s Florida coming to life in The Highwaymen Project, which includes both a feature-length film and a documentary series.

Production began on the documentary series at the end of June this year, with cameras rolling at the Orlando Museum of Art in several galleries where Highwaymen art was on display.

After more than ten years of dedicated development, this true, untold story of young African Americans that elevated themselves from poverty to prominence is finally coming to fruition at a time in U.S. history when powerful stories are particularly relevant and resonating. This was one of the first Florida-based films in production during Covid-19.

The Highwaymen tells the largely unknown story of how a group of 25 young African American men and one African American woman, barely out of high school, overcame the economic and social discrimination of the Jim Crow south by teaching themselves how to paint and creating a body of artwork that, 50 years later, would be identified as the "last great art movement of the 20th century." The group, led by nineteen-year-old Alfred Hair, were seeking to escape hard labor in citrus groves fields and packinghouses. They crafted their works from left-over construction material and house paint, creating a distinctive, colorful style that captured the stormy clouds, windy waves, quiet marshes and deserted beaches of an undeveloped Florida that no longer exists. Traveling up and down Central Florida's highways, they would hawk their paintings from the backs of cars for as little as $20 each, selling to motels, banks, doctor's offices and tourists, eventually producing over 200,000 works. Due to their "outsider" status, they never received the recognition and respect they deserved, always yearning to be called "artists."

But in the early 1990s, a curator and art journalist discovered their work in flea markets, antique shops and garage sales. Upon learning how their art was originally produced and sold, he named them "The Highwaymen." Highwaymen art now adorns the walls of museums, governor mansions -- even the White House.

The Highwaymen will be directed and produced by Thompson who, with producing partners Tim Franta (Woman In Motion) and Kathryn Kelly (It Doesn't Take A Hero) and Joy Kigin (I am Frankie), are making the film under Thompson's Stars North banner. Executive Producers Greg Galloway (Bobby Jones, Stroke of Genius), Benjamin Crump (Woman In Motion, Who Killed Tupac?), Lance Walker, Jr., Brigetta Cremata and Armando Cremata are also behind the film. Craig Fincannon and Lisa Mae Fincannon (Homeland, The Walking Dead) are casting.

After more than a decade of dedicated development, pre-production and casting is now underway on the project. Filming locations around Central Florida will include the Orlando Museum of Art, Central Florida Reception Center and Downtown Orlando districts like Washington Shores, Parramore and Holden Heights.

The Florida-based project is teaming the talents of award-winning director Thompson with the powerhouse writing duo of Lucien Christian Adderley and Richard 'Byrd' Wilson. (a.k.a. 89 Writers), who both grew up in South Florida and are currently in their second season writing for the critically-acclaimed OWN series David Makes Man, another South Florida-set drama created by Academy Award winner Tarell Alvin McCraney.

For questions or more details, call the Orange County Regional History Center at 407-836-8594.

Tips for Planning a Church Event

Small Ways to Reaffirm your Faith

Are you as grateful as you deserve to be?