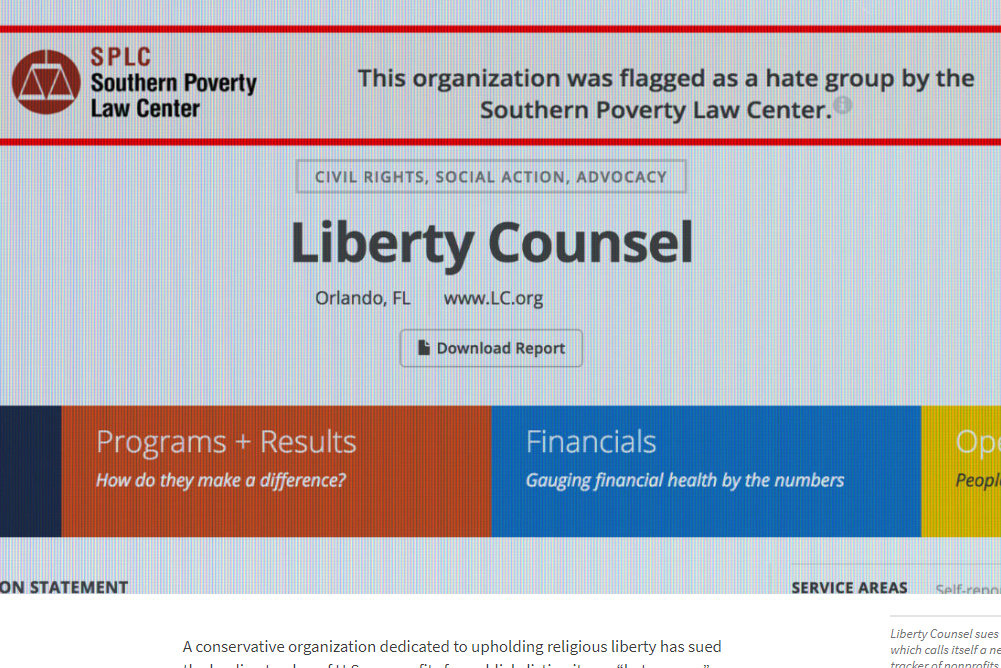 Liberty Counsel says it is a legal defense organization dedicated to advancing religious freedom and preserving family values from a "Christian and Biblical perspective."

The Southern Policy Law Center (SPLC), has called Liberty Council an "anti-LGBT hate group." Guidestar is using the SPLC label on its website which is used by many to evaluate charitable organizations.

Liberty Council's lawsuit charges GuideStar with violating the federal Lanham Act, along with state law violations of Interference with Business Expectancy and Defamation. The suit seeks a permanent injunction, damages, and attorney’s fees and costs.

“GuideStar and its political ally, the Southern Poverty Law Center (SPLC), are intent on destroying pro-family organizations. The ‘hate group’ label is false and dangerous,” said Mat Staver, Founder and Chairman of Liberty Counsel. “GuideStar’s CEO, Jacob Harold, is using GuideStar as a weapon to defame, harm, and promote his liberal agenda by using the SPLC to falsely label good nonprofit organizations as ‘hate groups.’ The only purpose of providing the SPLC false and dangerous ‘hate group’ label is to inflict reputational and financial harm to Liberty Counsel. GuideStar has lost all credibility. GuideStar will now have to answer for its reckless, defamatory, and harmful political labeling,” said Staver.

Staver continued: “GuideStar has not retracted its ‘hate group’ label and continues to provide false, defamatory and harmful information it pushes as fact to the public. The damage by GuideStar is far reaching because this false and defamatory labeling has been spread through scores of media sources and the internet. It also appears on the GuideStar Wikipedia page.”

Use this link to read Liberty Council's complete Press Release.

What is GuideStar? According to theer website, "We are a 501(c)(3) public charity that collects, organizes, and presents the information you want in an easy-to-understand format while remaining neutral."

How has SPLC responded?

"We stand ready to support our designation of Liberty Counsel as a hate group, said SPLC President Richard Cohen in a statement published on SPLC's website. "Liberty Counsel is a group that has consistently called LGBT people 'immoral, unnatural and self-destructive.' It has a track record of attempting to criminalize homosexual conduct and to legalize discrimination against the LGBT community. "There is nothing 'pro-family' about dehumanizing LGBT people. This lawsuit and other recent attacks against GuideStar are simply attempts to distract the public from Liberty Counsel’s hateful agenda."