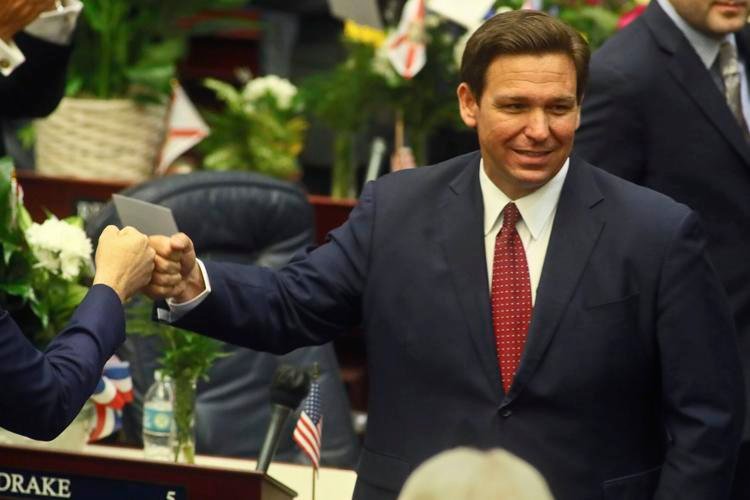 In this Tuesday, March 1, 2021 file photo, Florida Gov. Ron DeSantis fist bumps with legislators as he enters the House of Representatives prior to his State of the State address at the Capitol in Tallahassee, Fla. AP Photo/Phil Sears, File
Posted Monday, March 8, 2021 10:43 pm

Time Square’s Naked Cowboy was arrested Saturday for “aggressive panhandling” and resisting arrest during Daytona Beach’s annual Bike Week while in South Florida, it was a weekend of car chases and “chaos.”

Yes, it’s March madness, Florida-style, and a somewhat reassuring return to something approaching normal as the annual Bike Week gets underway and students from as many as 200 universities are flocking to Sunshine State beaches for spring break.

And while public health officials are alarmed and calling for strict enforcement of COVID-19 protocols, the mayhem is welcomed by businesses and, to varying degrees, by local governments after pandemic shutdowns brought annual events like Bike Week and spring break to a halt last year.

According to the Greater Miami Convention and Visitors Bureau, visitors between the ages of 18-25 spent more than $805 million during spring break 2019.

To regain some of that momentum – and money – lost last year, Miami tourism officials have spent $5 million to promote spring break, the largest advertising campaign in 20 years.

Airline travel to Florida, and Miami in particular, is half what it normally is, but with spring break a “go” for this year, hotel occupancy in South Florida is projected to reach 70 percent this month. Last year in March, it was 43 percent, according to the Greater Miami Convention and Visitors Bureau.

But local governments in Florida can impose limited restrictions, such as mask rules for businesses, although DeSantis prohibits them from fining people for not wearing masks or businesses for violating the rules.

In Miami, for instance, there is a midnight curfew and 8 p.m. retail liquor cutoff in place, but that apparently is not dampening the spring break spirit because even with local restrictions, social media is already afire with scenes of college students drinking and up close without masks.

Miami Beach Mayor Dan Gelber fears after a year of being shut down in their home states and home towns, students and other visitors are ready to party like it was 1999, not the pandemic year of 2021.

“This spring break feels like a different order of chaos,” Gelber told the Miami Herald. “It feels different. Part of it, clearly, is we’re the only place open.”

Miami Beach visitors receive cellphone messages from the city warning, “Vacation responsibly or be arrested” and informing them alcohol, coolers and tents are banned from its beach, there’s a midnight curfew and no alcohol can be sold after 10 p.m.

“Spring break in Miami Beach may be one of the great rites of passage, but only if you plan on following the rules. Otherwise, you might as well just stay home and save yourself the court costs,” the message says, reiterating the city has zero tolerance for public drunkenness, fights and illegal drug use.

As of Friday, Miami Beach police reported 355 arrests in the preceding days, several car chases that ended with teenaged drivers crashing into businesses and the confiscation of an unnumbered amount of firearms – a somewhat reassuring return to something approaching normal.