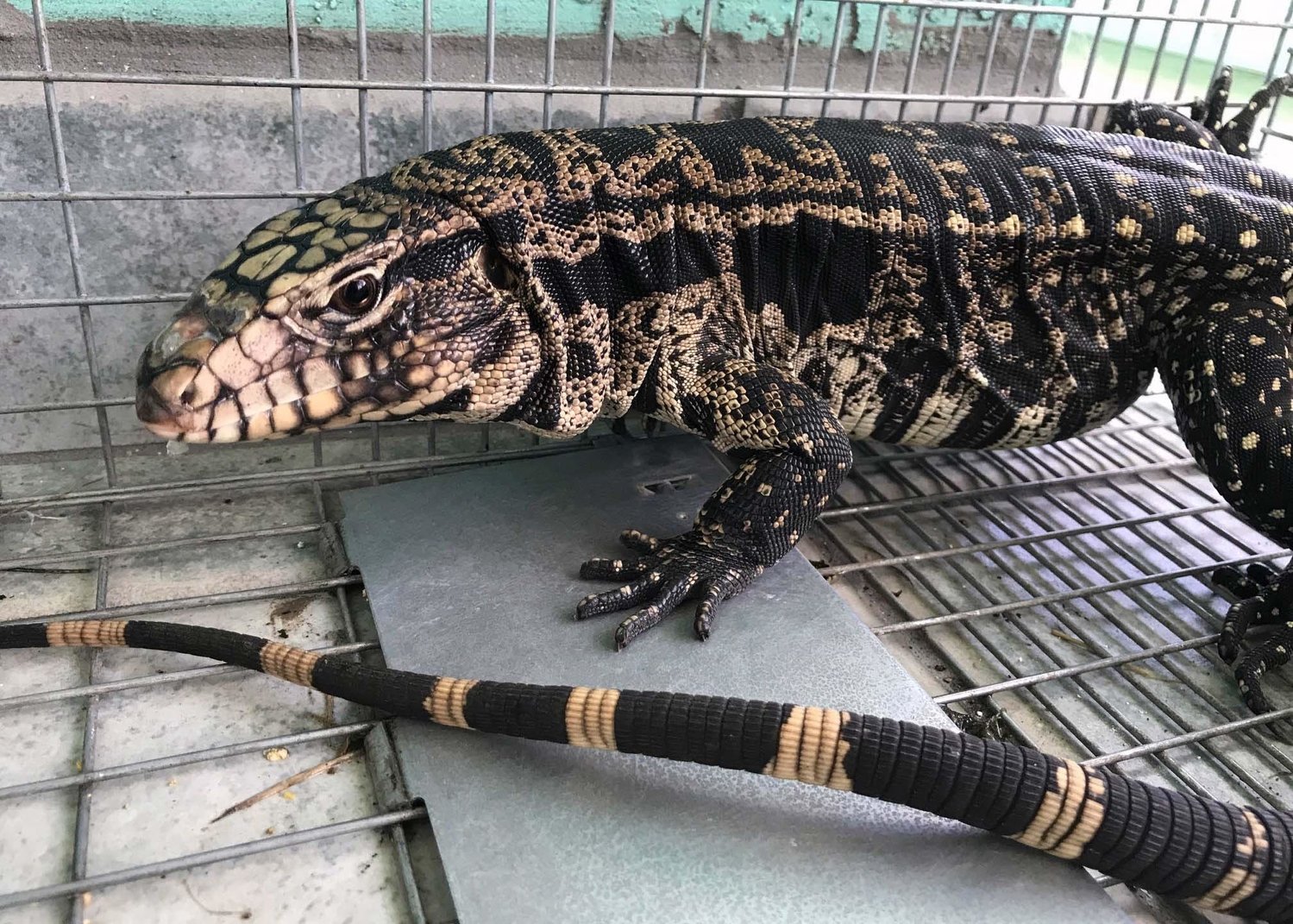 Argentine black and white tegus have spread and established populations in and around Florida at a rapid and growing rate demonstrating critical implications for native wildlife, numerous natural areas, and even restoration efforts for Everglades National Park. Tegus have been reported in several Florida counties including Lake, Orange, and Seminole.

UF scientists at the Institute of Food and Agricultural Sciences (UF/IFAS) and partnering agencies have co-authored the “Growth and Spread of the Argentine Black and White Tegu Population in Florida” illustrating the depth and breadth of the tegu problem. The comprehensive fact sheet details the invasion of the species, the tegu population’s increase, impacts for wildlife and natural areas at stake, interagency goals and efforts to reduce the threat, and the implications of species expansion.

Wildlife experts and scientists have developed cooperative programs over the last decade to locate, survey, monitor and trap tegus where they have spread and established populations – all to reduce their numbers and control the species in Florida and outlying areas before it continues to spread.

“Our work has shown that tegu populations can be controlled with sustained trapping efforts and resources,” said Melissa Miller, invasive species research coordinator for The Croc Docs at UF’s Fort Lauderdale Research and Education Center (REC). “Knowing we can achieve success in reducing tegu abundance and dispersal allows us to strategically prioritize efforts and protect at-risk native wildlife. However, dedicated multi-year funding is needed to continue enacting a successful interagency tegu control program across the landscape”.

Partnering agencies with UF/IFAS Croc Docs at the forefront of those efforts, some of which are co-authors of the fact sheet, include Florida Fish and Wildlife Conservation Commission (FWC), United States Geological Survey (USGS), United States Fish and Wildlife Service (Service), National Park Service (NPS), South Florida Water Management District (SFWMD), and U.S. Army Corps of Engineers (USACE). Each agency serves a specific role in the partnership to meet several goals in reducing the population and halting the spread of the Argentine black and white tegus.

The fact sheet maps out a timeline beginning with the tegu’s introduction into south Florida and their spread into areas impacting wildlife, threatening nesting areas of protected and endangered species, and entering natural areas including Everglades National Park. Collaborative interagency efforts began in 2009 to assess the south Florida tegu population through surveys, trapping, radio-tracking, and removal within the Everglades Cooperative Invasive Species Management Area.

The timeline also plots where tegus have spread beyond south Florida and are likely to continue establishing without sustained control, research, and monitoring efforts by partnering agencies. To date, Argentine black and white tegu populations have grown in numbers, with distinct populations established in four Florida counties. Tegus have been reported in 31 additional Florida counties, which may represent individuals that are escaped or released pets and that have not yet formed breeding populations. Tegu sightings have also been reported in four Georgia counties. Both the number of tegus removed, and the effort expended to catch them have increased. These totals do not include tegus removed by private trappers, some of who reported removing more than 400 tegus in a year.

"Several lines of evidence from four recent USGS research studies published from 2018 to 2021 now provide a clear indication for managers that the entire southeast portion of the United States is at risk of tegu establishment if lizard releases continue unabated,” said Amy Yackel Adams, a research ecologist for USGS.

“Working with our Federal and State partners, as well as with public and private land managers, we are identifying strategies and funding to help contain this threat,” said Larry Williams, the Service’s Florida Ecological Services state supervisor. “Research and risk assessments conducted show that tegus have a high potential to become the next ‘Burmese python’ in Florida.”

The Service regards the establishment and alarming increase in tegu numbers in Florida as a direct threat to many threatened and endangered species, especially egg-laying species. The spread of tegus can impact Everglade’s restoration efforts by increasing predation on threatened and endangered species, including the American crocodile, the Key Largo woodrat, the Cape Sable seaside sparrow, as well as all other ground-nesting birds and reptiles.

The Service has funded cooperative agreements for tegu trapping, monitoring, data management,  community outreach, and education activities in southern Miami-Dade and northern Monroe Counties to protect threatened and endangered species. The Service is also aiding the FWC in coordinating control efforts in St. Lucie County, providing traps, transporting tegus captured by homeowners, coordinating the work of a tegu trapping volunteer living in the area, and providing traps to the St. Lucie County Sheriff’s Office for the capture of tegus occupying their outdoor training facility.

SFWMD funds tegu monitoring, removal, and research through UF’s Everglades Invasive Reptile and Amphibian Monitoring Program by using live-trapping as a population management tool, motion-activated cameras to detect potential tegu expansion, and a rapid response network to prevent species establishment in new areas when they are reported. The District also facilitates land access for radiotelemetry and GPS tracking projects which investigate tegu movement and habitat use.

“Limiting the spread of tegus is a priority for the District because they prey upon native wildlife, including small mammals and reptiles,” said Rory Feeney, bureau chief of land resources at SFWMD. “Reducing the invasive tegu population and limiting their expansion is an important component of Everglades restoration,”

National Park Service (NPS) staff have worked alongside partners for many years to contain invasive tegu lizards outside Everglades National Park, mostly through trapping. Over time, significant improvements have been made to trapping, increasing the number of traps set to two or three times more traps than previously set. Most traps have been modified to be more efficient at catching tegus.

“We are making big investments to restore the Everglades, not to make a home for invasive weeds and reptiles. Along with our partners, the NPS remains committed to reducing the threat of tegu lizards and other invasive plants and animals to Everglades National Park,” said Pedro Ramos, superintendent of Everglades and Dry Tortugas national parks.

The FWC works collaboratively to minimize the impact of tegus on native wildlife and natural areas across landscapes while continuing to take actions that prevent the establishment of new tegu populations through regulation, systematic removal efforts within established populations, and by rapidly responding to confirmed sightings outside of established ranges. It has reduced regulatory barriers to nonnative reptile removal and encourages their humane removal from privately owned properties and FWC managed lands. To directly mitigate the impacts of tegus on its native ecosystems, the FWC uses staff and private contractors to detect, trap, and remove tegus in areas to decrease population size and spread. They also contract with research institutions to determine potential spread, evaluate detection and removal methods, and better understand impacts to native wildlife.

“Tegus are an invasive wildlife species that have significant impacts on our native wildlife and ecosystems and are a high priority for our agency to control. While tegus are an increasing concern, we can slow their spread and minimize their impacts by increasing efforts to prevent releases, rapidly responding to reports in new locations, and continuing management activities that reduce and contain breeding populations,” said Melissa Tucker, director of the Division of Habitat and Species Conservation, FWC.