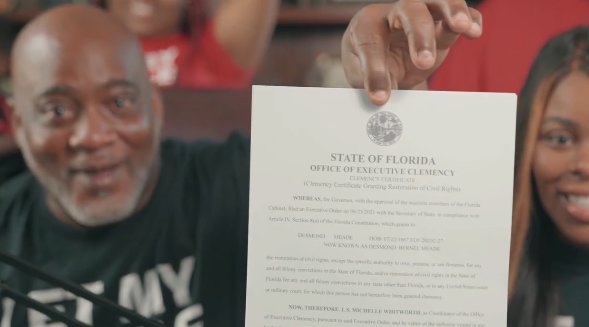 Desmond Meade shows off a copy of his clemency certificate during a Twitter streaming appearance on Oct. 9, 2021.
Posted Sunday, October 10, 2021 9:45 pm

Gov. DeSantis and Cabinet approved revised clemency rules that allow former felons to seek restoration of most civil rights — excepting access to guns — upon satisfaction of all legal financial obligation

Desmond Meade, a main force behind Florida’s drive to restore civil rights to thousands of former felons, now has had his own rights restored.

The announcement came Saturday during a Twitter broadcast during which family members presented Meade with a certificate from the Office of Executive Clemency announcing restoration of his civil rights, except to own, possess, or use firearms.

Clearly moved, Meade held the letter up to the camera during the broadcast. It said that Gov. Ron DeSantis and the Cabinet had approved the matter.

“Another chapter in the journey. Another, I guess, example of perseverance. When I didn’t get it when I first wanted it — you know, it shows that you’ve just got to keep pushing,” he said.

“It’s not a pardon, but it’s definitely a step in restoration of my civil rights. Definitely removes some hurdles from me. I can apply to the Florida Bar now. I can get a house. I can run for office if I want to run for office. This is, this is good.”

DeSantis had blocked a pardon for Meade as recently as March, and before that in September.

However, on that same March day the governor and Cabinet approved revised clemency rules that allow former felons to seek restoration of most civil rights — excepting access to guns — upon satisfaction of all legal financial obligations, meaning court-ordered fines, fees, and restitution.

Meade, of the Florida Rights Restoration Coalition, sponsored 2018’s Amendment 4, which promised to restore civil rights to former felons upon completion of any court-ordered punishment. The Legislature subsequently voted to strictly enforce language requiring payment of any remaining financial obligations.

Meade was eligible under those criteria and voted in last year’s elections; the clemency grant allows him to exercise additional civil rights, including to sit on juries.

On Sept. 28, Meade was named to a MacArthur Foundation fellowship, entitling him to a $625,000 stipend paid over five years to continue his work. The awards are intended to reward “exceptional creativity” and “promise for important future advances based on a track record of significant accomplishment.”