Calls for affordable housing state of emergency, a committee to study annexing South Apopka, and a Diversity, Inclusion, and Equity Commission 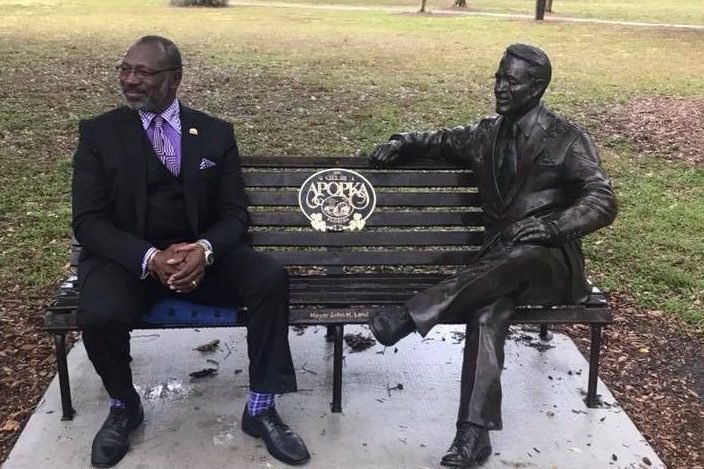 Apopka City Commissioner Alexander H. Smith began his second term in Seat #1 on the Apopka City Council with gusto. Smith, a typically soft-spoken member broke free from that label at its May 4th meeting, calling for three vital and related items.

Perhaps being elected unopposed was all the mandate he needed to effect change on the City Council.

"A couple of items that I would like to recommend to our Council and to the mayor to give that direction to staff," Smith said. "When looking at the crisis that we're now experiencing with affordable housing, let's look at the possibility of declaring a housing state of emergency in the city of Apopka and to pursue a rent stabilization program."

It would be a tough effort to move that forward, but other municipalities and state lawmakers are calling for the same measures. Florida law largely prohibits rent controls unless there is a "housing emergency."

In St. Petersburg, the City Council voted 6-1 to look into implementing a housing state of emergency.

In a 3-2 vote, the Miami-Dade Public Housing and Community Services Committee passed a measure to study the housing situation in the county with an eye towards calling for a housing state of emergency.

And a group of state lawmakers also addressed the affordable housing problem and called for Gov. Ron DeSantis to recognize any rent price increase of more than 10% as price gouging.

"This is an existing statute that is used during states of emergency," wrote Rep. Carlos Guillermo of Orlando in a letter to DeSantis. "During a hurricane, they will enact a state of emergency. And then consumer price protections can be enacted for things like water, gasoline, lumber, batteries."

Smith cited Florida statutes that allow local governments to declare a housing emergency which allows rents to be frozen for up to 12 months.

"I received a call this morning," Smith said. "A husband and wife are having to move out of the place they're renting currently because the landlord is not going to renew the lease... because [the landlord] can get more money in [a new] lease. They're looking for a place to live... so we can look at declaring a housing state of emergency."

Smith stressed the point even more in a text he sent The Apopka Voice after the meeting.

"It's important that we address affordable/workforce housing. The situation is getting worse, and it does not appear that it's going to get better any time soon. Working-class people find themselves homeless, struggling to make ends meet, and putting stress on their families. Tenants who pay more than 30% of their income on rent are rent-burdened, meaning they have less resources to pay for other basic needs for themselves and their families. Declaring a housing state of emergency in this crisis may be the only relief at this time. Pursuing some rent stabilization program to help those struggling could be a lifeline."

For months, there have been calls for the City to schedule a workshop on annexing South Apopka. But Smith is taking more of a pragmatic approach to the issue. He requested that a committee be chosen during the meeting to examine what it would take to annex South Apopka, but further amplified those thoughts in a later statement.

"Annexation is a topic that is not going anywhere and needs to be addressed. My recommendation is for the city to appoint a committee to begin serious negotiations with the County and the residents in the unincorporated areas of Apopka. It's time for Apopka to become united rather than divided down the middle of a road. A price tag should not be put on the quality of life or be the determining factor whether to annex or not. Do the human thing, which is the right thing, by annexing and investing in all of Apopka. A true "One Apopka" should be our goal!"

His third request was for a committee to study diversity, inclusion, and equity in Apopka.

"During the election cycle, diversity, inclusion, and equity were topics in each debate," he wrote in a statement after the meeting. "The makeup of our city is very diverse, and it became obvious during the discussions that it's a subject that needs attention. That's why I asked the mayor to appoint a Diversity, Inclusion & Equity Commission and allow each Commissioner to appoint one person to the Commission. Its role would be to establish communication, respect, goodwill, understanding, and equity inclusive of all citizens and businesses in Apopka. There are five "P's" I believe will address many of the issues that concern Apopka residents: People, Programs, Projects, Policies, and Partnerships. It's a tall order, but we can accomplish it."