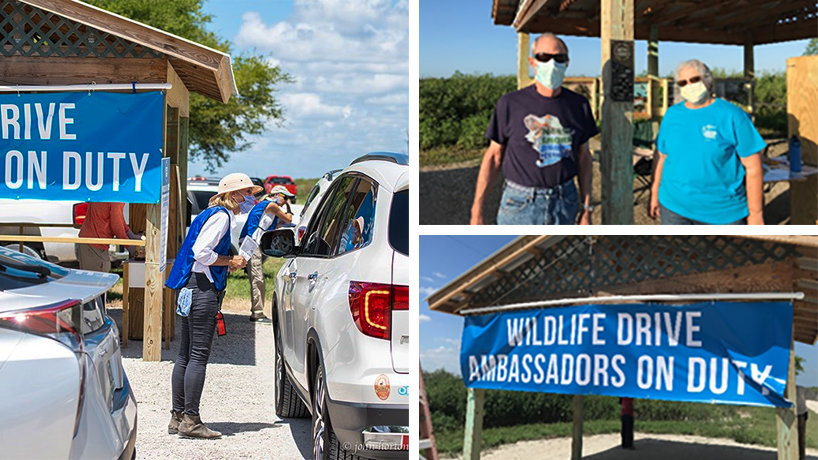 Volunteers greet visitors to the District’s Lake Apopka North Shore and wildlife drive. Their service was recently recognized by the District with the Bob Owens Award.
Posted Sunday, November 15, 2020 10:15 pm

Over the years, Orange Audubon Society’s members have been a driving force behind the resurgence of Lake Apopka’s popularity as a birding and wildlife viewing destination

“We’re grateful for Orange Audubon Society’s contributions to the community and its outstanding support for the District’s ongoing work to restore and protect Lake Apopka and the Lake Apopka North Shore,” said SJRWMD's Executive Director Dr. Ann Shortelle. “Their dedicated volunteers have expanded the public’s awareness and appreciation of this natural area.”

The District award, presented during the November 10 Governing Board meeting, is named for the late Bob Owens of Ormond Beach, a vocal supporter of environmental programs who attended nearly every District Governing Board meeting from the mid-1970s until his death in 1991. Owens was an environmentally aware private citizen who took personal interest in and contributed greatly to the natural resources of Florida.

Over the years, Orange Audubon Society’s members have been a driving force behind the resurgence of Lake Apopka’s popularity as a birding and wildlife viewing destination. Among its many accomplishments, Orange Audubon volunteers are on the Lake Apopka Wildlife Drive (LAWD) each Saturday and Sunday as Ambassadors, providing maps and information to visitors. They also manage a LAWD Facebook page with more than 13,000 followers and organize the North Shore Birding Festival, which in 2019 brought in visitors from 18 states, two Canadian provinces, and the UK. Other achievements include securing four rounds of grants from the National Audubon Society to develop educational kiosks for the LANS, participating in bird, butterfly and dragonfly surveys on LANS since January 2001, and continuing work to build a nature and environmental education center in the Lake Apopka North Shore area.

“It is an honor to have Orange Audubon Society recognized with the Bob Owens Award,” said Orange Audubon Society President Deborah Green. “We have been pleased to have the opportunity to partner with and support the District. Our efforts to help with public access to and education about Lake Apopka and its North Shore, an important bird area, have been rewarding. People really appreciate being able to get away from traffic and city noise on both the Lake Apopka Loop Trail and the Wildlife Drive and see so much wildlife.”

How to Easily Start Your Zero-Waste Journey — A Family Guide