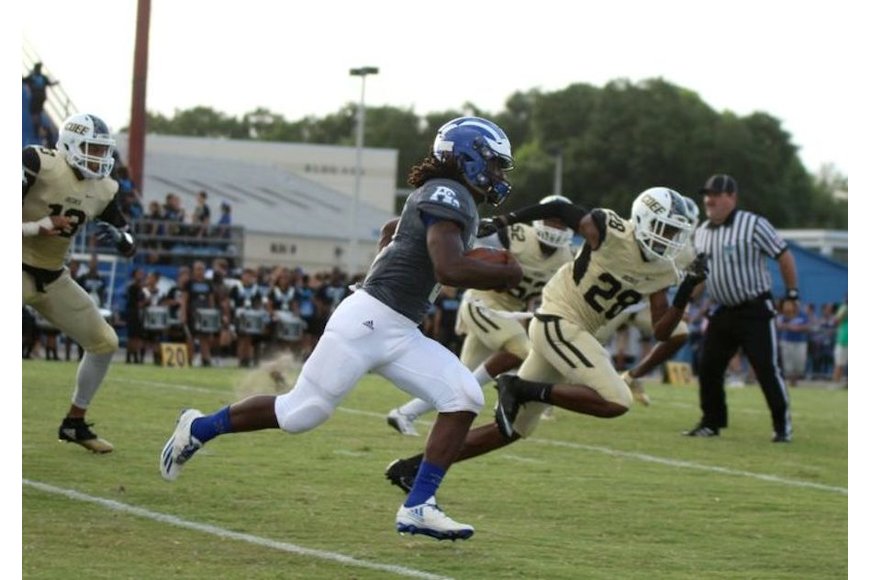 Deland Bulldogs at Apopka Blue Darters - Kickoff is 7pm at Roger Williams Field on the campus of Apopka High School.

Miami Norland Vikings at Wekiva Mustangs - Kickoff is 7pm at Baptiste Orthodontics Stadium on the campus of Wekiva High School.

For a preview of the Wekiva Mustangs, go here.

In 2019, the Apopka Blue Darters led the Miami Columbus Explorers 20-7 with less than four minutes left in the fourth quarter of the 8A state championship game. The Explorers scored two touchdowns and beat the Blue Darters 21-20.

In 2020, Apopka led the Sanford Seminole Seminoles 24-14 at the end of the third quarter in the 8A state semifinals. The Seminoles scored two fourth quarter touchdowns to edge Apopka 28-24.

In 2021, the Blue Darters are looking to end that pattern, and break through with a fourth state championship after two straight seasons that ended in heartbreaking losses.

The 2021 version of the Blue Darters will open its campaign in the pre-season Kickoff Classic against the DeLand Bulldogs who finished a pandemic-shortened 2020 season 4-3, including a 28-13 playoff loss to Seminole in the playoffs.

Apopka opens its regular season on the road August 27th against (Orlando) Colonial High School. The Grenadiers finished the 2020 season 3-6. The Blue Darters play their first home game against the West Orange Vikings September 3rd. West Orange upset Apopka 15-14 in overtime during the regular season, but the Blue Darters got its revenge against the Vikings 18-9 in the playoffs.

Defense will carry the load in 2021

For the past two seasons, the Blue Darter defense has been a will-imposing juggernaut. And 2021 lines up the same, if not stronger. Apopka will fly to the ball, wreak havoc in offensive backfields and force turnovers. Here is how bigcountypreps.com describes the Blue Darters defense:

"There will not be many better 2023 defensive line prospects than national recruit Kaven Call. The 6-3, 240-pound DE/DT moves around and creates havoc wherever he lines up. A premier athlete that’s continuing to get bigger and stronger, Call’s best attribute is his ability to penetrate and disrupt plays. Because teams will be watching Call closely, several teammates need to step up. It could be a class of 2024 player, however, that truly makes this line special.

It’s rare that a freshman makes an impact along Apopka’s defensive line, but Demetric Hill did that last year. He was a bit undersized at 6-2, 220-pounds, but he still lined up along the interior and made plays in the backfield. Much like Call, Hill can shoot a gap and blow up a running play. Hill is the next prospect to watch at the always loaded Apopka program.

At linebacker, this is a very experienced and talented group. With Travion Barnes and Josiah Robinson patrolling the middle of the field, the Blue Darters possess speed, experience, and physicality. It’s one of the best 1-2 punches at linebacker in the state of Florida, and both will play college football.

In the secondary, Apopka has plenty of talent as well. Nikai Martinez is a national recruit at one cornerback, and Myller Terameau is an undervalued corner on the other side of the field. They will both be difficult to pass on moving forward."

Apopka won't be called-on to run wild and score often on offense, but a spread formation that manages the clock and keeps the defense off the field for long stretches of time would probably be considered a successful season. Here's how Big County Preps sees the Blue Darter offensive weapons:

"More consistency is needed up front. With that in mind, the spread offensive attack should help Apopka keep defenses honest. That means more individual matchups, and that includes the best young offensive lineman on the team.

It’s time for 2023 offensive tackle prospect Tai Ray to maximize his talent. This is a young man that stands out amongst numerous Division I athletes. He’s very long and just now growing into his body. The big offensive tackle is 6-6, 275-pounds and can move his feet quite well.

If the Blue Darters can depend on Ray to be the go-to player to run behind, the skill talent will be even more effective than it already is. Speaking of, here are a few offensive weapons to remember.

Do not allow his height to fool you. The 5-7, 175-pound Keondray Jones is a jitterbug that can run around a defender, but can also plow forward and gain yards after contact. He’s probably the player most likely to benefit from the spread offense being installed. If placed in the slot, not many linebackers will be able to handle him in space either.

Another talented running back is 2022 all-around talent Quincy Frazier. The 6-1, 205-pound prospect possesses size and speed. Like Jones, he’s a good athlete in space so he could be a very difficult cover for linebackers, but he’s also big enough to help grind out drives at the end of the game to erase the clock.

Out wide, little doubt that Anthony Summerlin is happy to see the spread offense. The 6-3, 170-pound 2022 prospect did not gain many chances to catch the football the past couple of seasons, but he’s capable of making plays if given the chance.

Lastly for the player profiles, if one is looking for a sleeper to emerge, look no further than Andre Phillips. The class of 2023 player is listed at 6-2, 195-pounds, and he’s still adding size. He could be a help at wide receiver, tight end or H-Back."

For Baptiste Orthodontics, giving back to community is part of their staff culture

Vaccine clinics for young kids have launched at some FL schools; OCPS to start this week

Blue Darters heading to postseason for the 22nd straight year