All the new titles coming to Netflix in October 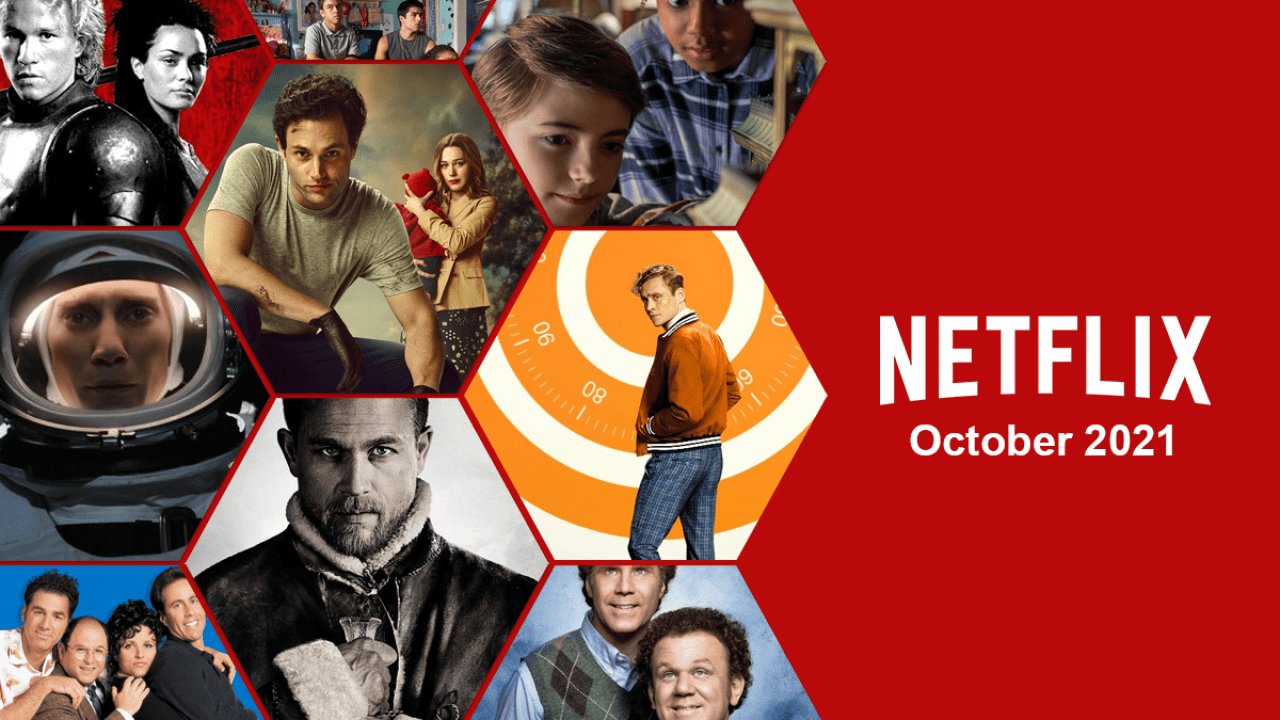 From What's on NetflixWelcome to a comprehensive look at what’s coming to Netflix in the United States throughout the month of October. Below, we’ll walk you through every new movie and TV series currently scheduled to premiere throughout the month.

Full List of What’s Coming to Netflix in October 2021

27 Steps of May (2018) – Award-winning Indonesian drama about a woman discovering a world beyond her traumatic past.

A Sinister Sect: Colonia Dignidad (Season 1) N – Historical documentary about a religious leader establishing a base in Chile.

An Inconvenient Truth (2006) – Al Gore presents this documentary where he campaigns about climate change.

Are You Afraid of the Dark? (Season 1) – Nickelodeon Halloween series.

As Good as It Gets (1997) – Jack Nicholson comedy-drama about a gar artist forming an unlikely friendship.

Awakenings (1990) – Biopic starring Robin Williams and Robert De Niro that tells the story of victims of an encephalitis epidemic.

Don’t Be a Menace to South Central While Drinking Your Juice in the Hood (1996) – Shawn Wayans and Marlon Wayans co-star in this crime copy that parody films such as Boyz n the Hood and South Central.

Eagle Eye (2008) – Shia LaBeouf headlines this mystery thriller about two strangers who are paired together and facing challenges and if they don’t comply, they’ll lose everything.

Endless Love (1981) – Romance movie about a high school student who falls in love with a 15-year-old.

Forever Rich (2021) N – Dutch comedy about a rapper who maintains a tough-guy persona which is under threat after a violent robbery.

Ghost (1990) – Oscar-winning romance fantasy movie about a young mans spirit that stays behind after being murdered.

Lara Croft Tomb Raider: The Cradle of Life (2003) – The video-game adaptation starring Angelina Jolie where she’s on a quest to find Pandora’s Box.

Léon: The Professional (1994) – Action drama starring Gary Oldman about a 12-year-old being abducted.

Live by Night (2016) – Ben Affleck stars in this crime drama about a group of gangsters from Boston who set up shop down in Florida.

Once Upon a Time in Mexico (2003) – Another Robert Rodriguez action thriller about a hitman becoming involved in international espionage.

Our Brand is Crisis (2015) – Comedy starring Sandra Bullock and Billy Bob Thornton. The movie sees an American consultant recruited to help re-elect a relatively useless and controversial president in Bolivia.

Project X (2012) – Todd Phillips produces this late-night comedy about three high school seniors throwing a birthday party to make a name for themselves. Things get out of hand and fast.

Robin Hood: Prince of Thieves – Unclear what version this is.

Rumor Has It… (2005) – Jennifer Aniston and Kevin Costner romantic-comedy.

Seinfeld (Seasons 1-9) – Winner of 10 Primetime Emmys, all 180 episodes of Seinfeld will come to Netflix exclusively around the world on October 1st. Starring Jerry Seinfeld, Julia Louis-Dreyfus and Michael Richards.

The Cave (2005) – Horror movie where a group of divers becomes trapped in a cave full of blood-thirsty creatures.

The Devil Inside (2012) – Horror set in Italy where a woman has been involved in multiple exorcisms.

The Guilty (2021) N – Jake Gyllenhaal and Ethan Hawke star in this thriller about a police officer who has been moved to dispatch duty.

The Seven Deadly Sins: Cursed by Light (2021) N – The second feature film in the anime franchise.

Titanic (1997) – The James Cameron epic retelling the story of the ill-fated R.M.S. Titanic.

Tommy Boy (1995) – Chris Farley and David Spade star in this comedy with the pair trying to save their family business.

Waterworld (1995) – Adventure sci-fi starring Kevin Costner where the polar ice-caps have melted and Earth is submerged in water.

Zodiac (2007) – The David Fincher epic about several people obsessed trying to find out who the Zodiac killer is.

On My Block (Season 4) N – The conclusion season (but not the end) of the teen comedy-drama that is set two years after the event of season 3.

Remember You (Season 1) – Thai crime romance series about a young detective pulled in to help aid his failing memory.

Baking Impossible (Season 1) N – A brand new baking competition show where engineers and bakers are teamed up together. Hosted by Justin Willman.

Ella Fitzgerald: Just One of Those Things (2019) – Music documentary on the female musician who was known for being the biggest female artist for half a century.

The Blacklist (Season 8) – The latest season of the NBC series headlined by James Spader.

The Five Juanas (Season 1) N – Telenova about five women who are linked after they discover the have the same birthmark.

There’s Someone Inside Your House (2021) N – Horror thriller ahead of Halloween from producer Shawn Levy. The movie follows a group of young outsiders who are hoping to stop a serial killer.

The Way of the Househusband (Part 2) N – Second batch of episodes of the anime series.

A Tale of Dark & Grimm (Season 1) N – New animated kids series based on the classic Hansel and Gretel tale.

Angeliena (2021) – South African movie from Uga Carlini about a parking attendant who sets out to travel the world.

Family Business (Season 3) N – The French comedy series about a family in the business of growing and selling pot comes to a conclusion.

House of Secrets: The Burari Deaths (Season 1) N – True-crime docuseries that looks into the deaths of 11 members of a Dehli family.

Pokemon the Movie: Secrets of the Jungle (2021) N – A new animated Pokemon movie about Koko who meets Ash and Pikachu and must team up to save his home.

Pretty Smart (Season 1) N – LGBTQ sitcom about a young girl named Chelsea who moves in with her sister and her three roommates.

Blue Period (Season 1 – New Episodes Weekly) N – Anime series about a young boy who is bored of school and expresses himself using art.

Occupation: Rainfall (2021) – Australian sci-fi movie that will make its SVOD debut on Netflix. Set shortly after an alien invasion about a resistance group rising up against the aliens.

A Sinister Sect: Colonia Dignidad (Season 1) N – Docuseries on a colony of Germans who established themselves in Chile.

Shameless (U.S.) (Season 11) – The final season of the Showtime series.

The King’s Affection (Season 1 – New Episodes Weekly) N – Korean period drama about a prince’s twin sister taking over the duties of the throne.

Bright: Samurai Soul (2021) N – An anime feature film that serves as a spin-off to the 2017 Will Smith movie that’s set in the early years of Japan’s Meiji Restoration.

Convergence: Courage in a Crisis (2021) N – Orlando von Einsiedel directed documentary focusing on the unsung heroes of the COVID-19 pandemic.

Rita Moreno: Just a Girl Who Decided to Go for It (2021) – Documentary on the Puerto Rican actress who made waves and starred in Netflix’s One Day at a Time.

The Movies That Made Us (Season 3) N – More behind-the-scenes looks at your favorite movies with this season covering Aliens, Robocop, Halloween, Coming to America, and more.

Fever Dream (2021) N – American-Chilean-Spanish co-production drama based on the novel by Samantha Schweblin.

Operation Hyacinth (2021) N – Set in Poland 1985, this sees a young officer take a case into his own hands to discover the truth.

Reflection of You (Season 1) N

Another Life (Season 2) N – Niko and her crew witness the annihilation of a planet in the second season of Netflix’s sci-fi thriller series.

Ghost Hunting (2017) – Documentary about a group of Palestinian men who talk about their capture and torture.

In The Dark (Season 3) – The CW’s comedy crime series.

World Without (2021) N – Set in a dystopian future where dating is outlawed.

My Name (Season 1) N – Korean series also known as Undercover Nemesis about a woman who joins a gang to avenge her father.

The Forgotten Battle (2021) N – Dutch war drama set during the crucial WWII battle, The Battle of the Scheldt.

The Trip (2021) N – Norwegian action thriller about a dysfunctional couple heading to a cabin to reconnect but both go with the intention of killing each other.

Misfit: The Series (Season 1) N – Teen comedy about a group known as The Misfits prepping a school musical.

Victoria & Abdul (2017) – Judi Dench stars in this historical drama which sees Queen Victoria strike up a friendship with a young Indian clerk.

In for a Murder (2021) N – Polish comedy thriller about a stay-at-home mom who reads crime stories and goes on a quest to solve a real-life murder.

Night Teeth (2021) N – A college student picks up seemingly innocent girls who are heading on a night out however they turn out to be extremely dangerous.

Stuck Together (2021) N – Dany Boon directs this comedy set in Paris during the pandemic and sees families try to get along while confined to their shared apartments.

Sex, Love, and goop (Season 1) N – Gwyneth Paltrow along with team goop look into how to enhance your relationship for deeper intimacy.

Dynasty (Season 4) – Every episode of The CW’s soap reboot.

Inside Job (Season 1) N – Alex Hirsch and Shion Takeuchi team together on this brand new animated series set in the underground HQ of the Deep State.

Locke & Key (Season 2) N – The story continues with more keys and more problems. Based on the Joe Hill comic series.

Maya and the Three (Limited Series) N – Animated fantasy series about a princess embarking on a mission to fulfill an ancient prophecy.

More than Blue: The Series (Season 1) N – Romantic musical based on a movie.

The Raincoat Killer: Chasing a Predator in Korea (Season 1) N – Investigative docuseries set in the early 2000s where a man hammered his victims to death across Korea.

We Steal Secrets: The Story of WikiLeaks (2013) – Documentary on Julian Assange’s controversial website.

Hypnotic (2021) N – Horror thriller about a young woman seeking self-improvement but the hypnotherapist she hires comes with a lot of secrets.

Nobody Sleeps in the Woods Tonight Part 2 (2021) N – Sequel to the Polish horror movie.

Wentworth (Season 8B / Season 9) – The final season of the Australian prison drama.

Army of Thieves (2021) N – Prequel to Zack Snyder’s Army of the Dead that sees Matthias Schweighofer reprise his role as Ludwig who is recruited for another heist.

Colin in Black & White (Limited Series) N – Avu DuVernay helms this new series based on the life of the activist and sportsman, Colin Kaepernick.

The Time It Takes (Season 1) N – Spanish romance series about a woman looking for a new career and is willing to get into some strange things to make it. Starring Nadia de Santiago and Álvaro Cervantes.

An Astrological Guide for Broken Hearts