Buying a home is expensive – the single priciest transaction many of us ever undertake. So it should come as little surprise that a majority of home buyers report making some kind of financial sacrifice to afford their homes – with younger buyers, first-time buyers and/or parents more likely to give up something.

Although the housing market has cooled in recent months, homes in some areas remain out of reach for typical residents. In six of the country’s 100 largest metro areas, a mortgage on the median-valued home costs more than 30% of the median income – beyond what’s considered affordable. And even in more-affordable areas, saving for a down payment takes time and discipline.

According to the Zillow Group 2019 Consumer Housing Trends Report: 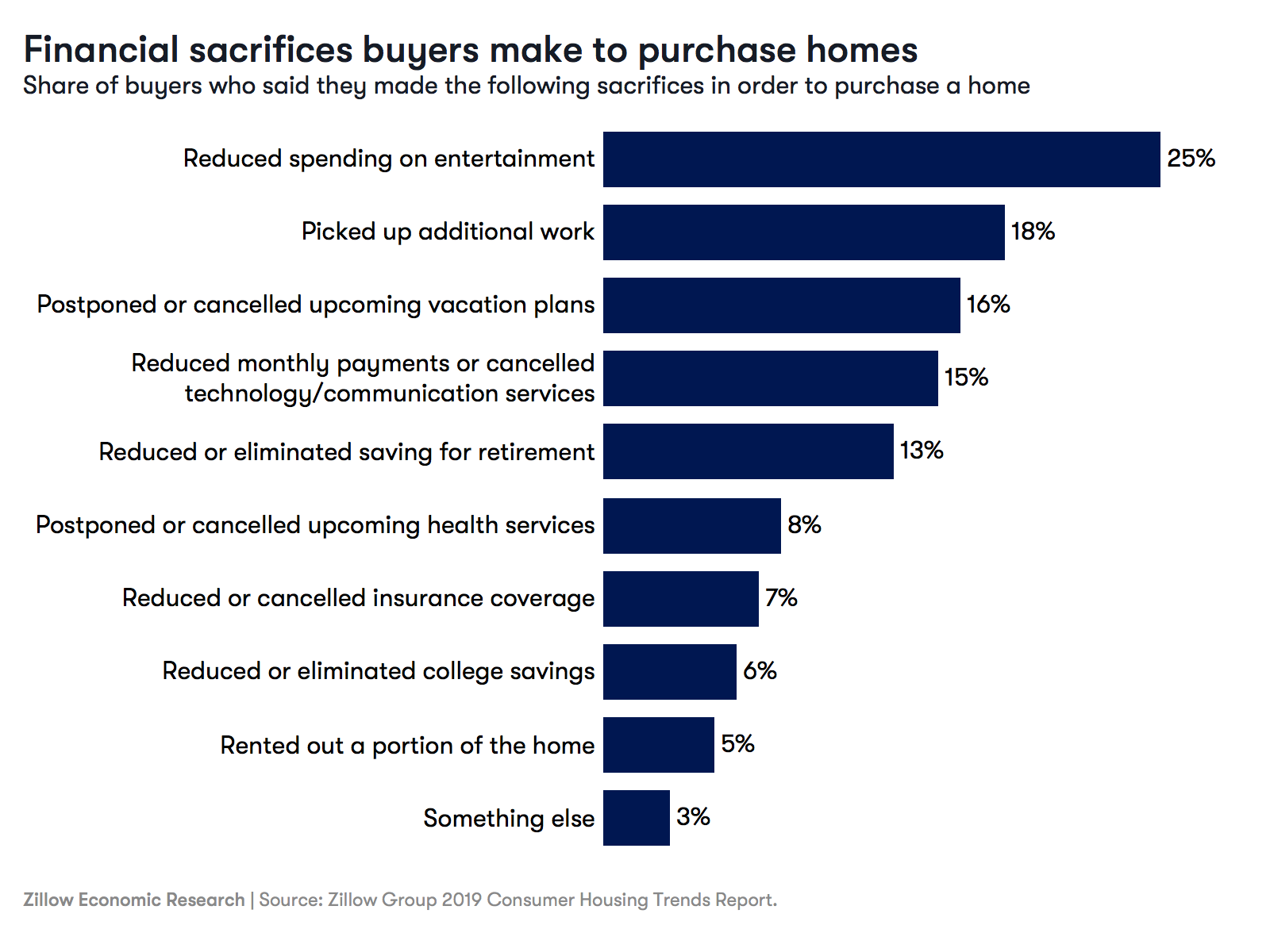 Younger buyers, first-timers, and parents are more likely to sacrifice

Younger buyers are much more likely to say they made financial sacrifices in order to purchase their home: 71% of Gen Z and millennial buyers did, compared with 57% of Gen X, and 33% of Baby Boomer and Silent Generation buyers.

Making sacrifices could be a function of going over budget, as younger buyers are more likely to do: 29% of millennials purchased a home above their initial budget compared with 23% of Gen X and 22% of Baby Boomers.

When asked why they went over budget, buyers in general (not just younger buyers) most commonly cited falling in love with a home above their price point (33% who blew the budget stated this reason), purchasing a home in better condition than planned (28%) and buying in a pricier neighborhood than planned (27%).

For younger buyers who were able to get into their homes, many had help from family: 47% of Gen Z and millennial buyers who purchased with a mortgage had help in the form of gifts or loans from family or friends for some portion of their down payment. This is substantially higher than the 33% of Gen X and 13% of Boomers and Silent Generation buyers with a mortgage who had such assistance.

Like younger buyers, first-time buyers also were more likely to make financial sacrifices to buy a home: 65% of first-timers mention at least one sacrifice compared with 47% of repeat buyers.

Parents are the third group of buyers who are likely to make sacrifices in order to buy homes: 67% of buyers with children at homemade some type of financial sacrifice to afford their home compared with 44% of buyers without kids at home.

After the sacrifices that many buyers make to afford their homes, there is a silver lining. Only 8% of homeowners regret purchasing instead of renting, and only 25% say they would buy a different home if they could do it all over again. The oldest homeowners are most likely to say they’d buy the same home again (86% of Silent Generation homeowners). Still, a large percentage (74%) of millennials and Gen Z homeowners say they got it right on the first attempt.

Everything coming to Amazon Prime Video in February