Why is it so hard for atheists to get voted in to Congress? 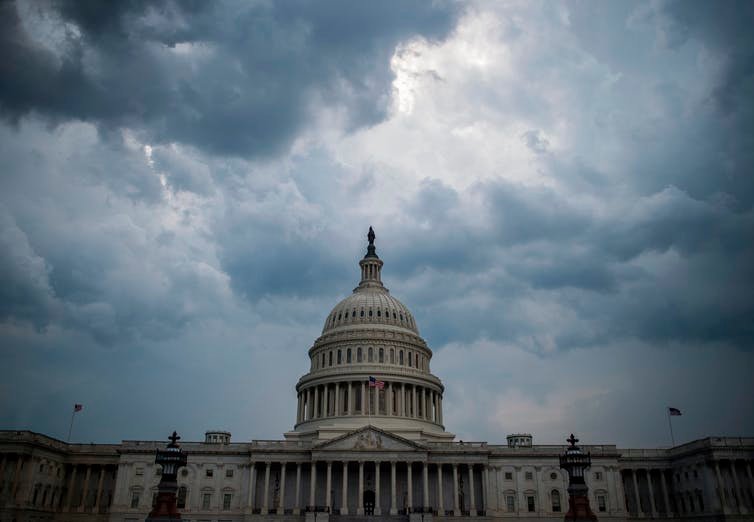 Every election cycle has its “firsts.”

This year, the selection of Kamala Harris as Joe Biden’s running mate presented the U.S. with its first politician of Indian heritage – and the first Black woman – to be on a major party ticket. It followed Hillary Clinton’s becoming the first woman to win the popular vote for president in a 2016 election to replace America’s first Black president, Barack Obama.

But in this era of increasing diversity and the breaking of long-rigid political-demographic barriers, there is no self-identifying atheist in national politics. Indeed, throughout history, only one self-identified atheist in the U.S. Congress comes to mind, the late California Democrat Peter Stark.

‘In atheists, they don’t trust’

This puts the country at odds with democracies the world over that have elected openly godless – or at least openly skeptical – leaders who went on to become revered national figures, such as Jawaharlal Nehru in India, Sweden’s Olof Palme, Jose Mujica in Uruguay and Israel’s Golda Meir. New Zealand’s Jacinda Ardern, the global leader who has arguably navigated the coronavirus crisis with the most credit, says she is agnostic.

But in the United States, self-identified nonbelievers are at a distinct disadvantage. A 2019 poll asking Americans who they were willing to vote for in a hypothetical presidential election found that 96% would vote for a candidate who is Black, 94% for a woman, 95% for a Hispanic candidate, 93% for a Jew, 76% for a gay or lesbian candidate and 66% for a Muslim – but atheists fall below all of these, down at 60%. That is a sizable chunk who would not vote for a candidate simply on the basis of their nonreligion.

In fact, a 2014 survey found Americans would be more willing to vote for a presidential candidate who had never held office before, or who had extramarital affairs, than for an atheist.

In a country that changed its original national motto in 1956 from the secular “E pluribus unum” – “out of many, one” – to the faithful “In God We Trust,” it seems people don’t trust someone who doesn’t believe in God.

As a scholar who studies atheism in the U.S., I have long sought to understand what is behind such antipathy toward nonbelievers seeking office.

There appear to be two primary reasons atheism remains the kiss of death for aspiring politicians in the U.S. – one is rooted in a reaction to historical and political events, while the other is rooted in baseless bigotry.

Let’s start with the first: atheism’s prominence within communist regimes. Some of the most murderous dictatorships of the 20th century – including Stalin’s Soviet Union and Pol Pot’s Cambodia – were explicitly atheistic. Bulldozing humans right and persecuting religious believers were fundamental to their oppressive agendas. Talk about a branding problem for atheists.

For those who considered themselves lovers of liberty, democracy and the First Amendment guarantee of the free exercise of religion, it made sense to develop fearful distrust of atheism, given its association with such brutal dictatorships.

And even though such regimes have long since met their demise, the association of atheism with a lack of freedom lingered long after.

The second reason atheists find it hard to get elected in America, however, is the result of an irrational linkage in many people’s minds between atheism and immorality. Some assume that because atheists don’t believe in a deity watching and judging their every move, they must be more likely to murder, steal, lie and cheat. One recent study, for example, found that Americans even intuitively link atheism with necrobestiality and cannibalism.

Such bigoted associations between atheism and immorality do not align with reality. There is simply no empirical evidence that most people who lack a belief in God are immoral. If anything, the evidence points in the other direction. Research has shown that atheists tend to be less racist, less homophobic and less misogynistic than those professing a belief in God.

Most atheists subscribe to humanistic ethics based on compassion and a desire to alleviate suffering. This may help explain why atheists have been found to be more supportive of efforts to fight climate change, as well as more supportive of refugees and of the right to die.

This may also explain why, according to my research, those states within the U.S. with the least religious populations – as well as democratic nations with the most secular citizens – tend to be the most humane, safe, peaceful and prosperous.

Although the rivers of anti-atheism run deep throughout the American political landscape, they are starting to thin. More and more nonbelievers are openly expressing their godlessness, and swelling numbers of Americans are becoming secular: In the past 15 years, the percentage of Americans claiming no religious affiliation has risen from 16% to 26%. Meanwhile, some find the image of a Bible-wielding Trump troubling, opening up the possibility that suddenly Christianity may be contending with a branding problem of its own, especially in the skeptical eyes of younger Americans.

In 2018, a new group emerged in Washington, D.C.: The Congressional Freethought Caucus. Although it only has 13 members, it portends a significant shift in which some elected members of Congress are no longer afraid of being identified as, at the very least, agnostic. Given this new development, as well as the growing number of nonreligious Americans, it shouldn’t be a surprise if one day a self-identified atheist makes it to the White House.

Will that day come sooner rather than later? God only knows. Or rather, only time will tell.