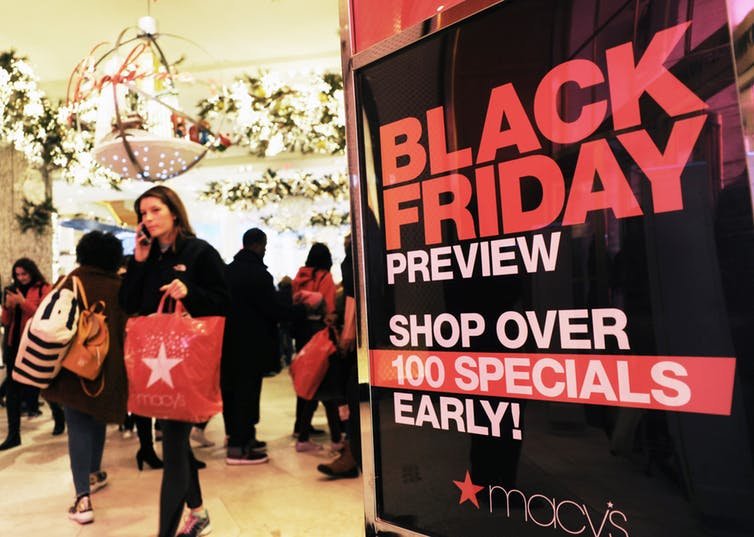 If the thought of taking part in the annual ritual of Black Friday gives you cold chills rather than a rush of excitement, you’re not alone. For every avid bargain hunter who plans for the day as if training for a marathon, there’s someone else who stays home, secure in the knowledge that no one will trample them, shove them or invade their personal space just to get this season’s hottest deals.

It’s not just a lack of appreciation for bargains that drives this disconnect. Psychology research indicates that several factors determine which side of the shop-‘til-you-drop divide you land on. Some people just aren’t wired to enjoy the more social aspects of shopping.

What you prioritize plays in

Psychology researchers divide the world into two groups: those who tend to focus more on achieving tasks versus those who focus more on making connections with others. This idea is encapsulated in what’s known as goal theory.

Task-oriented shoppers typically focus on finding the things they need as quickly as possible and with the least amount of effort. Socially oriented shoppers, on the other hand, enjoy the presence of others while they shop.

There is experimental evidence that task-oriented shoppers are more likely to find even a handful of other shoppers nearby to be a crowd and an obstacle to a successful shopping trip. The same research suggests that social shoppers are actually energized by the presence of other consumers. These folks enjoy the experience more when there are others nearby, even if they don’t directly interact.

Another aspect of this shopping divide comes down to individual expectations regarding personal space. Psychology researchers talk about this preference in what they call field theory. If you’ve ever been bothered by a “close-talker” who leans in too close or touches your arm as they tell you a story, then you are likely someone who requires a little more personal space than that storyteller does.

The presence of other shoppers in a store is psychologically arousing for people on both ends of the personal space spectrum, but in different ways. People who don’t require much personal space feel excitement when others are around. That same arousal feels instead like stress to the person who requires a little more space to call their own. And stress is something everyone tries to minimize. Almost everything we do as consumers is an attempt to reduce stress – from eating when we feel hungry to buying that bigger TV you just have to have.

Taken together, these two theories explain a lot about the way you feel about Black Friday-style shopping.

Survival tips for the reluctant shopper

The five-day period that starts on Thanksgiving Day and ends on Cyber Monday will bring about two-thirds of Americans out to shop. Black Friday remains the busiest shopping day of the year, with roughly half Americans leaving their homes to take part in this consumer ritual.

If you read those statistics and think, “Bring it on!” then you are likely a social shopper who enjoys the thrill of the hunt and finds crowds energizing.

If instead, you react to those numbers by booking a root canal so you don’t have to hit the stores, then you’re more likely a task-oriented shopper who prefers to get in and get out with the items you need. You are also more likely to be annoyed by the physical closeness of strangers that is a hallmark of competitive shopping. But don’t call the dentist just yet – there may still be ways for you to comfortably participate in Black Friday and its bargains.

A plan puts a reluctant shopper more in control. Victoria43/Shutterstock.com

First, make a list of everyone for whom you would like to find a gift. Then do your research on the sales that might help you achieve your goals. Both of those tasks should appeal to the need for organization that task-oriented shoppers tend to exhibit.

Next, recognize that the majority of Black Friday devotees are going for the big bargains first, and that means that they’ll head for the big box and department stores. Instead make your first stops the local boutiques and smaller shops that won’t get as much traffic early in the day.

By the time you’ve taken care of those items on your list, the larger stores will begin to clear out and you can head in. Try avoiding malls and go where you can park close to the store you actually want to visit. Doing this will allow you to feel some degree of control and alleviate some of the stress you feel when you don’t have direction.

By the end of the day, you can check some things off your shopping list and feel good about the bargains you were able to find, all while maintaining your sanity.

And if you’ve read this far merely to better understand why your significant other doesn’t want to join you on this most special of consumer holidays, just acknowledge your psychological differences. You go ahead and tackle Black Friday with the enthusiasm of a natural-born social shopper. Don’t worry about those who resist – they can always snag Cyber Monday bargains from the comfort of home.