Spring Training: ‘The Boys of Summer’ return to Florida this week 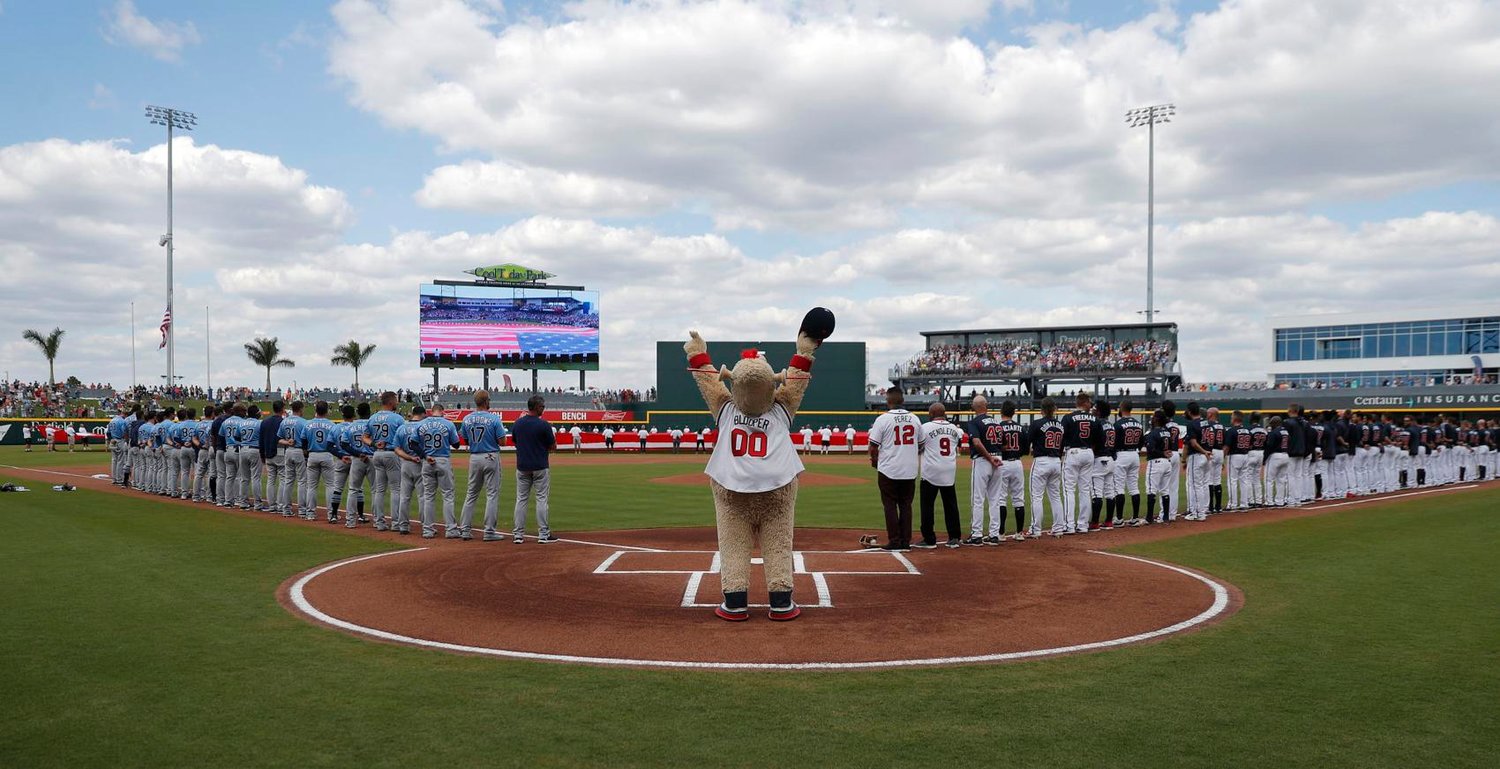 The Tampa Bay Rays and Atlanta Braves line the baselines after the national anthem and a ceremony March 24, 2019, to open the Braves' new spring training home in North Port. John Bazemore / AP
Posted Wednesday, February 12, 2020 10:54 am

Pitchers and catchers report to Major League Baseball sites in Florida and Arizona this week, kicking off an annual rite of passage signaling the end of winter and the start of spring.

Spring training is among major sports events that will unfold in Florida this year, beginning with the Super Bowl in Miami on Feb. 2 that drew 200,000 people and generated an estimated $300 million.

According to an oft-cited study by Downs & St. Germain Research, the 2018 spring-training season delivered $687.1 million in sales to state businesses, including $584 million in direct spending by Grapefruit League tourists, and created 7,152 jobs that paid $253.5 million in wages.

The study documented a 61 percent increase in economic impact since 2009, confirming spring training remains profitable in Florida, an assurance in doubt after the 2003-10 departures of five teams – Dodgers, Reds, Indians, Royals, and Rangers – from Florida to Arizona.

Since 2010, however, no MLB teams have left Florida, although several have relocated from the state’s east coast to its west coast.

With the Atlanta Braves in 2019 moving from Orlando to North Port in Sarasota County, 10 of the 15 teams are now between Tampa Bay and Fort Myers along the Gulf Coast.

The competition from Arizona, as well as within Florida, prompted some municipalities and the state to spend public money to retain or lure teams. Lee County, for instance, sold $81 million in bonds to keep the Boston Red Sox in Fort Myers in 2010.

In 2001, the Florida Sports Foundation – a non-profit created by the Legislature – used a $54.5 million state allocation, and local matching funds, to renovate five spring training stadiums. The state kicked in another $52.9 million for four stadium renovations in 2006.

Under a proposed 2020 bill, however, local communities would be prohibited from using revenues from tourist-development taxes and half-cent sales taxes on professional sports amenities. House Bill 1369, sponsored by Rep. Cary Pigman, R-Avon Park, was approved Feb. 3 in a 14-1 vote by the Ways & Means Committee. Its next stop is in the House Commerce Committee. The bill also awaits a hearing before the House Workforce Development & Tourism Subcommittee.

“If these franchises and the stadiums they build are as lucrative as is explained, there will be plenty of private investors willing to participate in their financing,” Pigman said.

Rep. Colleen Burton, R-Lakeland, noting the Detroit Tigers have made Lakeland their spring training home since 1934, said the team generates $63 million in visitor spending annually in Polk County, and HB 1369 needs more review before she’d vote for it on the floor.

HB 1369 does not have a Senate companion, although it is similar to HB 6057, filed by Rep. Bryan Avila, R-Miami Springs, which would repeal a program that allocates money for stadium construction and renovation but has not been tapped since 2014.